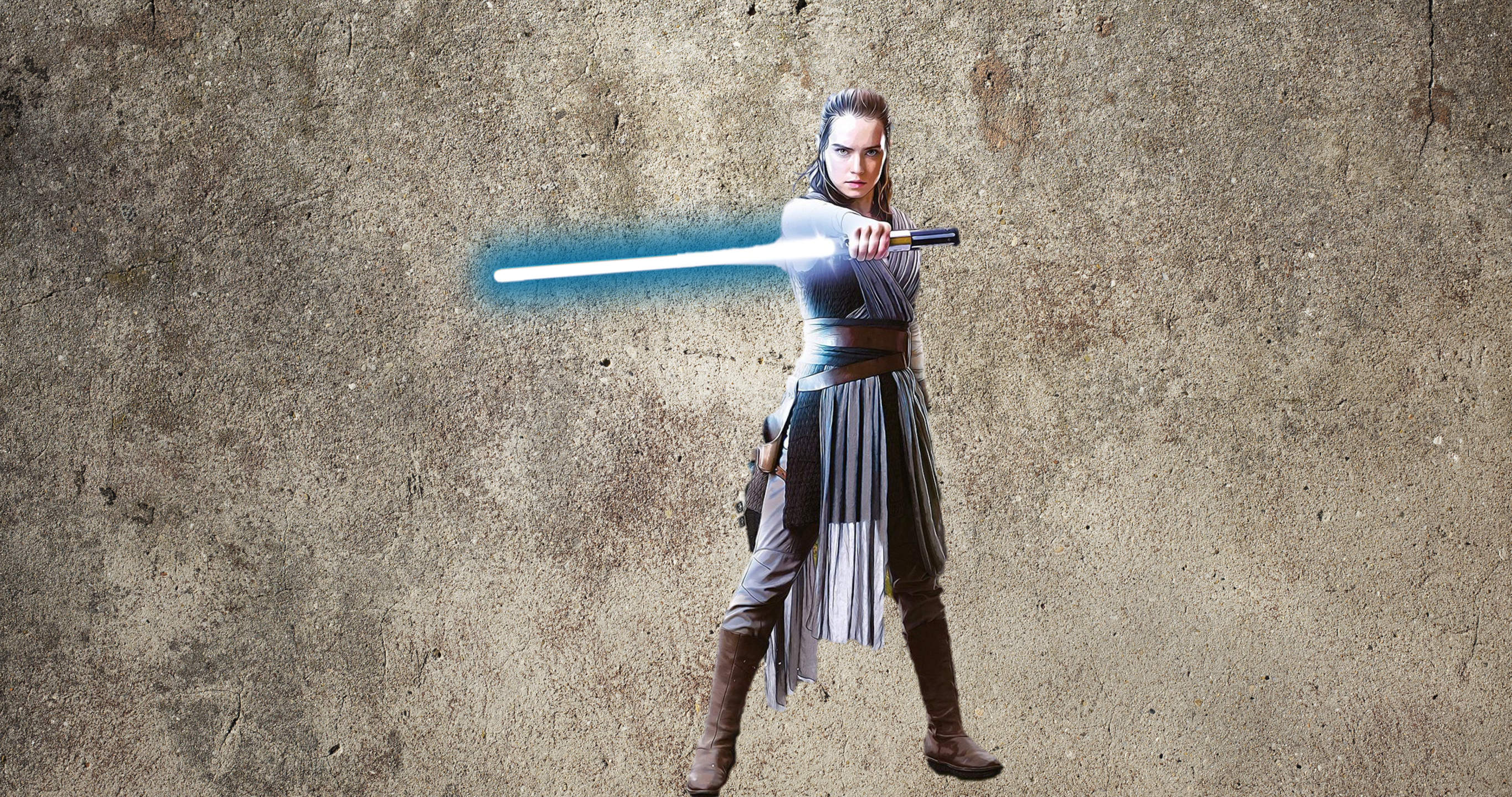 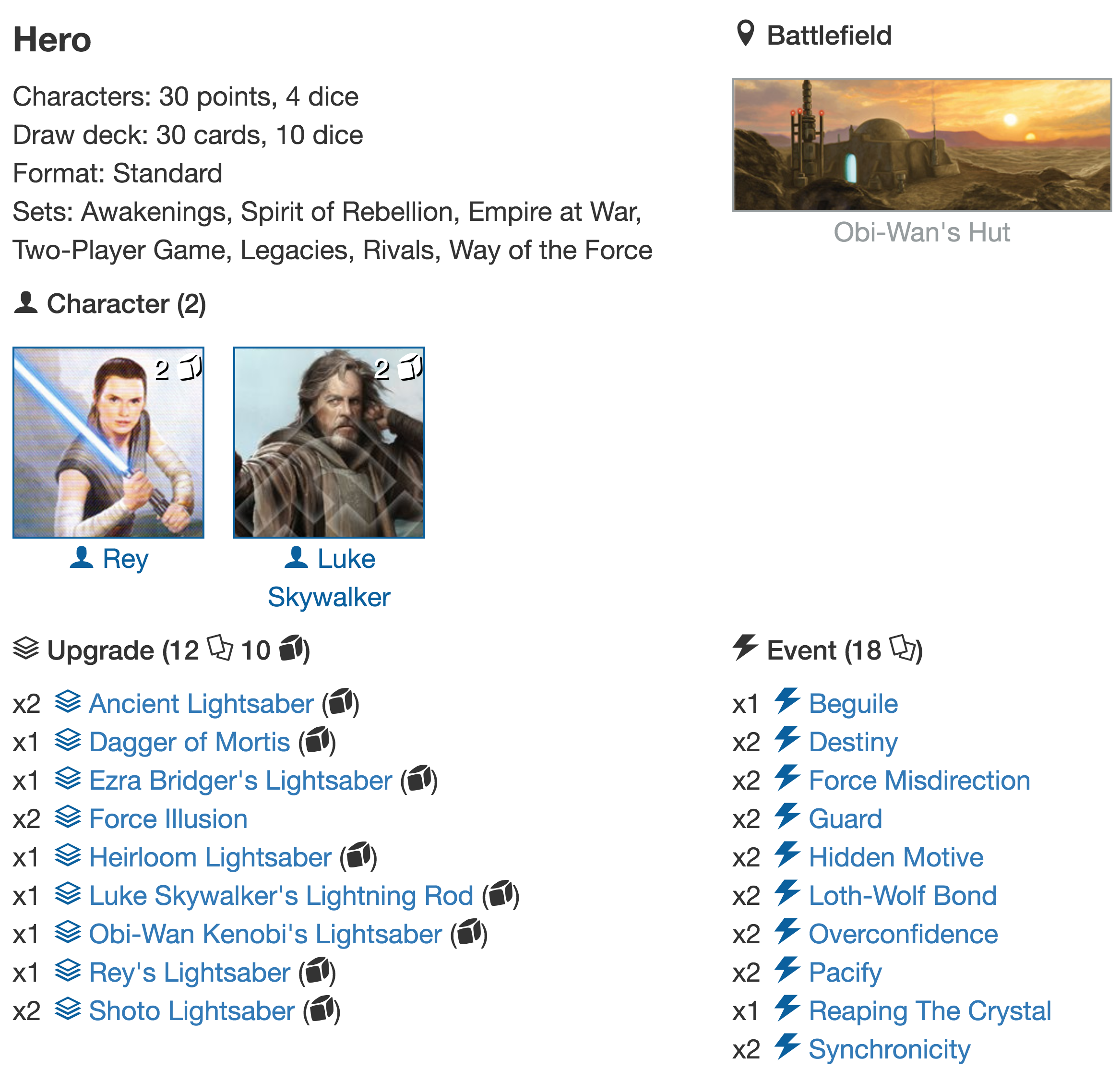 It's really no surprise with the power level of stairs coming out of the Legacies meta, and with the balance of the force increasing Aayla's cost, that the hero blue duo for this set would be Rey2/Luke3. Being a medium/medium build, both characters costing 15 points it gives the deck a great balance. Luke is incredibly powerful and synchronises with Rey's ability to "always" making sure she can ping that extra damage with her ability.

This deck is pretty straightforward, play upgrades as fast as you can and roll loads of Melee and Shield sides. Rinse and repeat!
2. CHARACTERS: 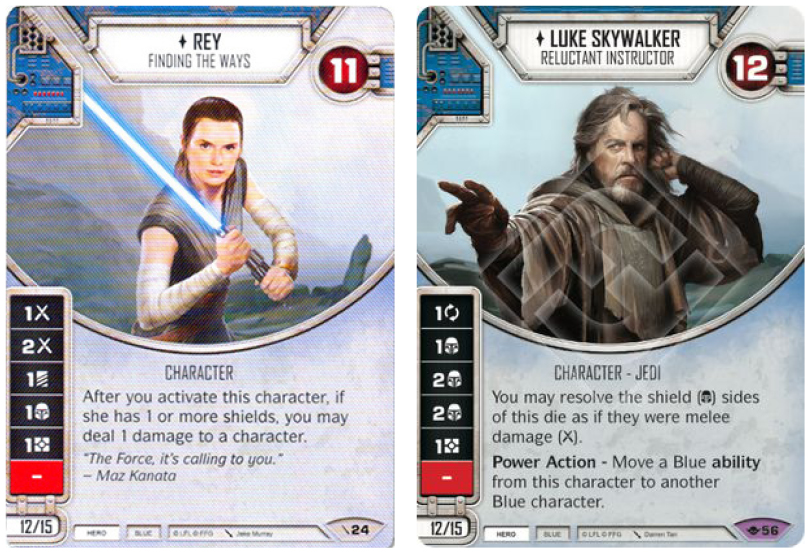 Rey2 has been a staple in the meta pretty much since her release in the two player set. First with Rey2/Poe2 (R2P2), then moving into Rey2/Aayla (Stairs), of which you'll find countless discussions and videos, on the YOUR Destiny website.

Luke Skywalker - Reluctant Instructor is the Luke I have been waiting for, gone is the Jedi Knight and Unlikely Hero of the past and finally we have the green milk swigging older man.

On one hand he is a fantastic aggro character, but arguably also the best defensive character in Destiny . He possesses a very flexible die, has high health, and while his Power Action is a total trap and should be ignored for now, his ability to interchange between resolving his dice as Shields or Melee damage is very powerful.

This deck is all about building your board state with upgrades in the early rounds. It has been said before and this won’t be the last time, but I'd recommend you read Mads Utzon's article on resource management in order to understand just how powerful resources are in this game, particularly in round 1 and 2. 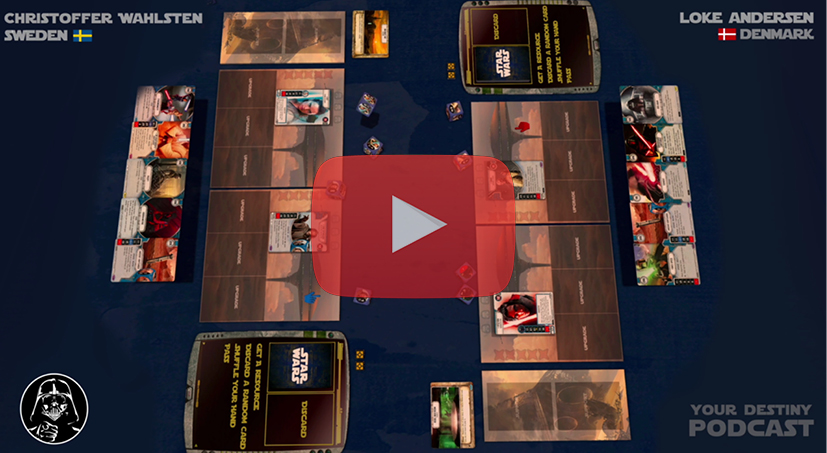 Watch Rey/Luke battle it out against Snoke/Kylo on our YouTube Channel where we regularly feature recorded TTS Games between some of Europe's best Star Wars Destiny players and most of them members of the YOUR Destiny Test Group: The European Gauntlet.
3. UPGRADES & SUPPORTS:(The main parts of the following section is copied from the Rey/Aayla write up that was done by Mads Utzon and Claus Staal as it is still a core part of this deck. And not much has changed really. There are a few new additions though following the release of Way of the Force, which means that the upgrade suite had to be mixed up a bit).

IT'S YOUR DESTINY
Before we can start talking about the upgrade/support suite of the deck, we need to talk about the card that was tech'ed into the deck because those cards in many ways defines the entire upgrade suite.

Destiny opens up some outright broken starts. In a game where ramp (the ability to improve your board state) is important, Destiny is probably one of the best cards out there for a purebred midrange aggro deck. The ability to harvest resources and play upgrades from mediocre die rolls is just amazing.

You can turn an early Luke 2 Shield side into a Shoto Lightsaber on Rey, or a +3 Melee side on an Ancient Lightsaber die into an Obi's Lightsaber or Dagger of Mortis. A well-played Destiny will secure a rampant board state. It is not rare to have a first round board state looking like this:

It's obviously not going to happen in every game, but the ramp ability of the deck is so strong, that it occurs more often than you might think. Even if you do not draw into a Destiny round 1, it can still speed you up in round 2.

The way that Destiny shapes the upgrade suite is to then include as many high quality low cost upgrades as possible to allow you to flood the board, and blue heroes really received their share of the spoils in Way of the Force (Check our Way of the Force Set Reviews for BLUE HERO and NEUTRAL cards for the run down on the cards).

ANCIENT LIGHTSABER
Is a stable in monoblue decks (and beyond). It's excessively good, and fits the bill on so many accounts. A +3 Melee side to go with either Destiny, Guard or just pure aggro, 2 base damage sides, shields, resources and healing your characters. One of the most expensive card ($$$) in the game for a reason.

DAGGER OF MORTIS
Very Similar to the popular Heirloom Lightsaber - same die sides bar the extra 2 melee and changed +3 melee, it still has Redeploy, but has a very interesting ability of being able to move a shield from any blue character to the attached character. This can effective deal extra damage and/or help tank up your character.

FORCE ILLUSION
Is essentially another mitigation card. NEVER EVER play your Force Illusion late ... be proactive!

HEIRLOOM LIGHTSABER
Is a fan favorite. It does its job well, but it's not the star of the show. At least it has Redeploy, which saves it a spot in the deck, but it is inferior to the other 3 cost upgrades in the deck.

LUKE SKYWALKER'S LIGHTNING ROD
Changing one Focus to one Shield, this is basically a 3rd Luke die. Showing melee that can be changed to shields (as long as it's attached to Luke, but then why wouldn't it!?). Its one big let down is being an upgrade - equipment and not a weapon so no Shoto Lightsaber triggers with this one. The baked in utility of this die when played on Luke makes it a must have.

OBI-WAN KENOBI'S LIGHTSABER
It has HUGE sides that goes well with everything your deck is trying to achieve. It can ramp, tank and kill! The special should manage to be a 3 unblockable damage with the number of shield sides in this deck.

REY'S LIGHTSABER
Is just STUPIDLY GOOD, A Jedi Robes mashed into a Lightsaber with 3 melee sides and Redeploy.

SHOTO LIGHTSABER
Have you ever sat across from a Rey with 2 Shoto Lightsabers? How often have you won those games? Exactly! That's how insane that setup is. Shotos alongside with Obi-Wan Kenobi's Lightsaber is the bread and butter of Rey/x decks. The fact that it has two modified damage sides shouldn't be too much of a problem as you are pretty flush with base damage sides. Like most sabers in your deck it doesn't really have any bad sides. The resources are good if you need the ramp and shields can be used to tank and trigger Synchronicity.
4. EVENTS:

BEGUILE
Is Beguile better than Mind Trick is the question you need to ask yourself! From my testing, so far, it doesn't allow you to remove waves of dice, but can allow you to seriously alter the board state. Remember you can remove the re-rolled die if it ends up on a good side (which would the be bad for you!).

DESTINY
A last point, adding to the argument of Destiny over It Binds All Things is that Destiny is AS PLAYABLE (although not as powerful) in the mid and late game as it is in the early parts of the game. Destiny can be used to play mitigation even if you do not have any resources, i.e. you have two Luke dice showing resources and 2 Shields in the pool, but no resources left, and you can use Destiny to remove the die showing resource to play an Overconfidence. You've saved yourself an action (i.e. to resolve the resource side to be able to play the Overconfidence), and you've probably managed to surprise your opponent, who thought himself safe from mitigation.

FORCE MISDIRECTION
Slightly weaker in this deck over original Rey/Aayla. The earlier rounds you are building up Rey and not rolling her out first action like we used to do with Aayla meaning it takes more actions before you can play this to remove loads of melee. However if Luke3 becomes popular you can easily remove his strong dice and almost every blue weapon has a shield side on it.

GUARD
Very weak in the early game while your trying to build up Rey and not rolling her in this is the flex spot in the deck and requires further testing whether it can keep the slot.

HIDDEN MOTIVE
0 Cost removal, when things don’t go your way it ends up being just soft mitigation. But allows you ramp in the early turns spending your money on upgrades.

LOTH-WOLF BOND
I use to always play Jedi robes in my Rey decks giving you access to that shield when you needed it and giving you a base to override into a weapon after. Loth-Wolf Bond just does this job better, giving both characters a shield and activating them in the mid game is very powerful, maybe even worth playing swiftness…? 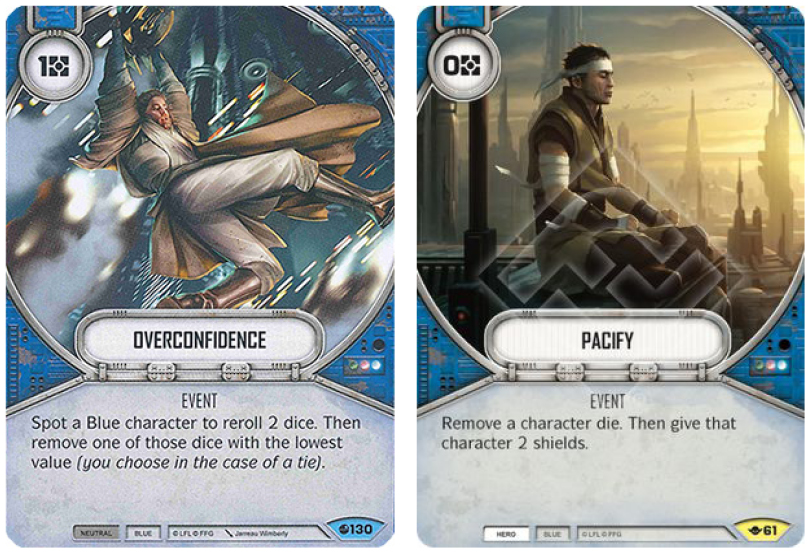 OVERCONFIDENCE
Is good. Removal and soft mitigation in one card! In many decks the “Spot Blue” play condition is prohibitive - not with Rey2/Luke3. Do remember to check out Mads Utzon's talk about the "Overconfidence Fight Mode" in the YOUR Destiny Podcast Episode 13.

PACIFY
What a flexible card, remember Caution? I sure don’t. Ok, so you have to remove a die from the character you want to give the shields but since Luke can do this anyways it doesn’t make a different. The big deal with this card its another 0 cost removal card, Yes you give them two shields but 2 Shotos on Rey will see easy work of that or removing a impactful die on a support character early and dealing with the shields later to me makes this card an auto include. REAPING THE CRYSTAL
We include one copy of Reaping the Crystal to help with the early ramp. It's good in the first couple of rounds, and pretty much a dead card later on, although it can help you drop a 3 cost weapon in the later stages of the game where you might be a bit strapped for cash.

SYNCHRONICITY
The ability to deal 2 (unblockable) damage out of hand can be good - and sometimes game winning! It's an expected card to bring in a monoblue hero deck, and rightly so now even easier to play with Luke sporting 3 shield sides.
5. MULLIGAN STRATEGY:You want to see two 2 cost Weapon upgrades in your starting hand, a Destiny, early mitigation (Pacify or Hidden Motive), Last spot is flexible Reaping The Crystal if you have a 3 drop or Synchronicity to push an early kill on a low health character.