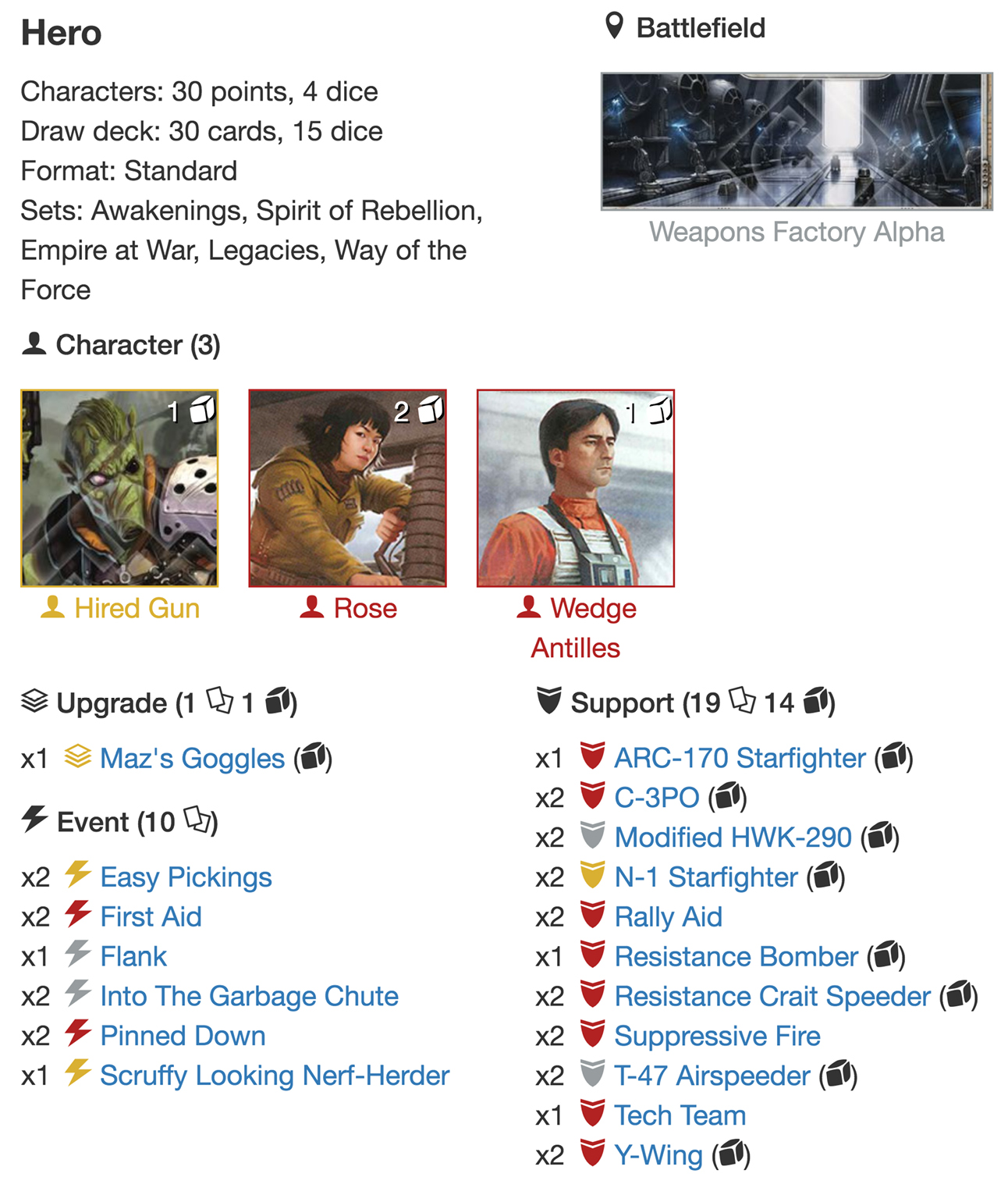 1. GENERAL COMMENTS:I first saw this deck when I encountered Brian Herold playing it at my local Store Championship, which he later took down. I’ll be honest I had never really considered this pairing during my early brewing of the season. I was really, really, impressed at how well this deck was able to fend off aggro decks with the combination of a massive health pool, solid removal suite and of course a crushing mid to late game with its vehicles running rampant.

I was so thoroughly impressed with the performance of the deck, that I decided to tinker a bit with it and try to tune it to my particular play style.
2. CHARACTERS:

Together, Rose, Hired Gun, and Wedge all combine to make a 29 health behemoth that will make aggressive decks want to cry. I have played many games where aggro decks just simply do not have enough gas in the tank to deal enough damage to kill this list off before its vehicles reach critical mass and end the game.

While it is true that these 3 have been chosen partially because of their massive health pool, each of them also individually brings something unique to the table.

Rose is of course the cornerstone of the deck. She brings home the resources, with her 2 Special sides. Not only that, while her interaction with the Modified HWK-290 is well known, her synergy with the newly printed Resistance Crait Speeder really pushes her over the edge. The ability to continually reset the +1 to resolution is borderline unfair.

Wedge Antilles is an excellent bargain at just 11 points and way too often overlooked. For that cost you get a tanky 11 hit points, an acceptable die (the +3 indirect damage is quite good, but can be hard to resolve) and an extremely powerful Power Action which adds needed consistency to the deck.

Hired Gun gives you access to the powerful yellow card suite in addition to being able to stall out the enemies’ ability to remove your ability to spot yellow with his 9 hit points. His die is great, whether it be rolling one of his two Resource sides, or bashing someone for 3 Ranged damage.
3. SUPPORTS & UPGRADES:

As mentioned, Rose’s Special works wonders with the HWK-290 and Crait Speeder, while the T-47 Airspeeder is just a very powerful card, don’t hesitate to use that Special to draw cards when your hand is empty, and you are either flush with resources, or in need of re-rolls (this is particularly powerful against one of your worst match ups: mill).

The Y-Wing, Resistance Bomber, ARC-170, and the N-1 Starfighter round out the 3 cost vehicle suite. The Y-Wing is great as a 2 of, and although the meta seems to shift towards resource management becoming easier, and decks generally generating more resources, its Special is still incredibly powerful (and Wedge's Power Action makes it a very reliable side).

The N-1 Starfighter does not need to be run as a two of, but I have chosen it as a way to get an advantage over the other vehicles decks with its ability to destroy vehicles (a pity the Planetary Bombardment is not a vehicle). I chose to run 1 Resistance Bomber because of Wedge’s ability to Power Action it to the 6 Indirect damage side and wreak havoc upon your opponent. 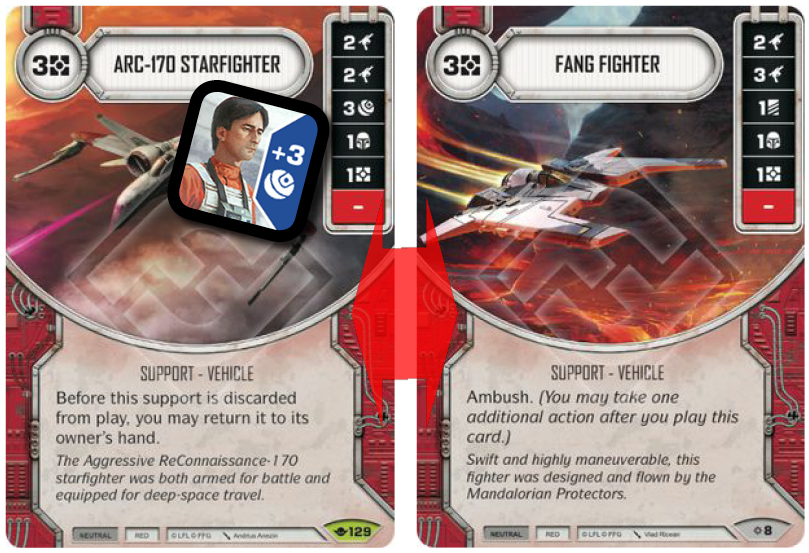 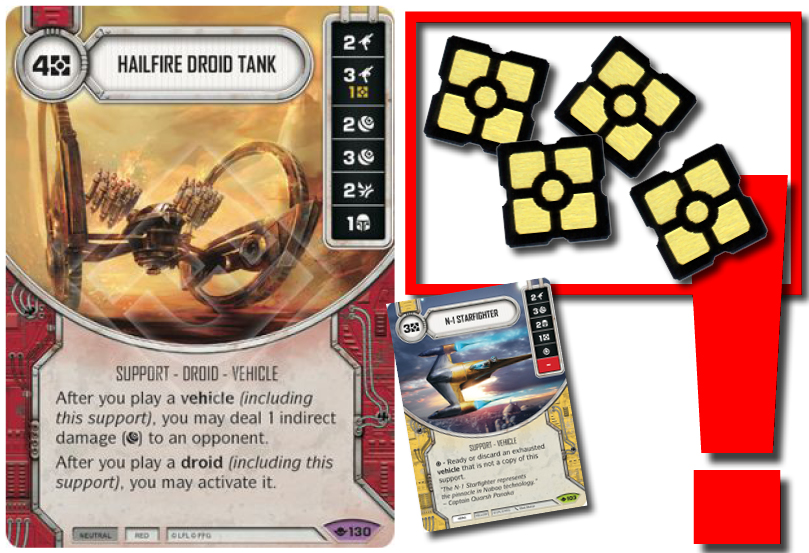 I left out Hailfire Droid Tank because I personally think that 4 resources is too draining on this deck’s economy but you could certainly add 1 or 2 and remove two of the 3 cost vehicles. They are quite powerful, I would just rather be able to play a 3 drop and still be able to play removal.

ADDITIONAL UPGRADES & SUPPORTS!
For ramp I run 2 RALLY AID and 1 TECH TEAM (although running 2 Tech Teams is a viable choice as well if you want to clip one of the flexible card spots in the list). 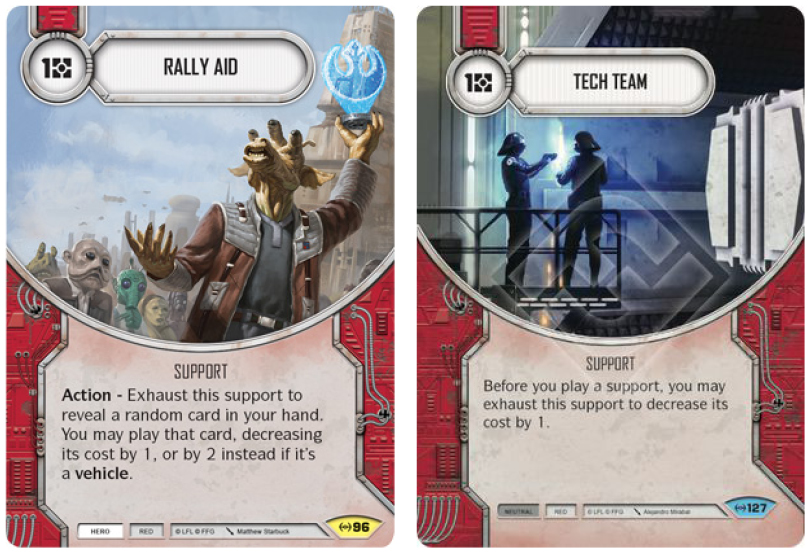 RALLY AID is an auto include, its pure ramping power on turn 1 and even 2 gives unreal value throughout the game. The TECH TEAM is functionally your third Rally Aid, even though it’s only half as good. Hitting ramp is really important though, so Tech Team makes the cut! 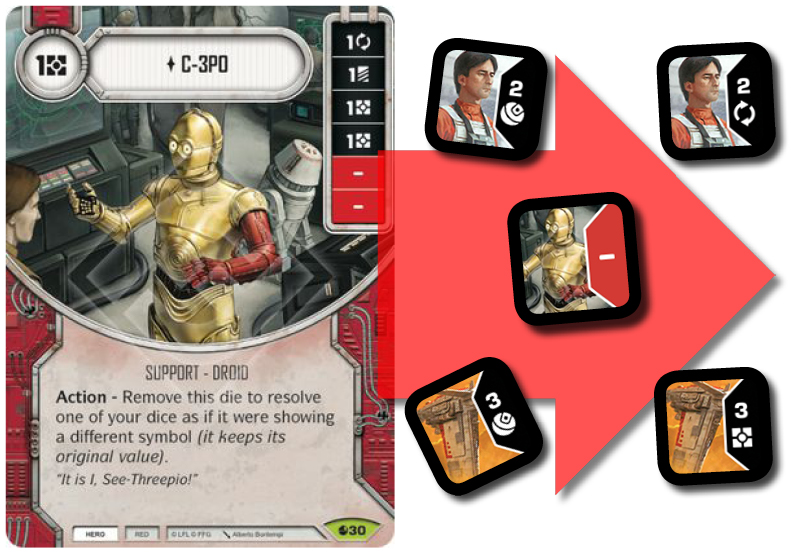 I have also chosen to run two copies of good ol' trusted C-3PO. His ability to manipulate your dice into resources, discards, focuses, or making Indirect damage into Direct damage, whatever, is all incredibly good and important for a deck like this, so I run two to increase my chances of drawing him on time (and protect against Vandalize and mill).

I also run a single copy of MAZ'S GOGGLES to help both give me Focus sides, or fish out Hyperspace Jumps, Mind Tricks, In the Crosshairs etc. that can be a real killer in dangerous match ups. Normally, if you were running an Ezra or an Anakin, Spot Yellow cards would be very tricky to include too many of in your deck, but Hired Gun, due to his 9hp, is really protecting these cards well and he's not really a juicy target in this character team either. 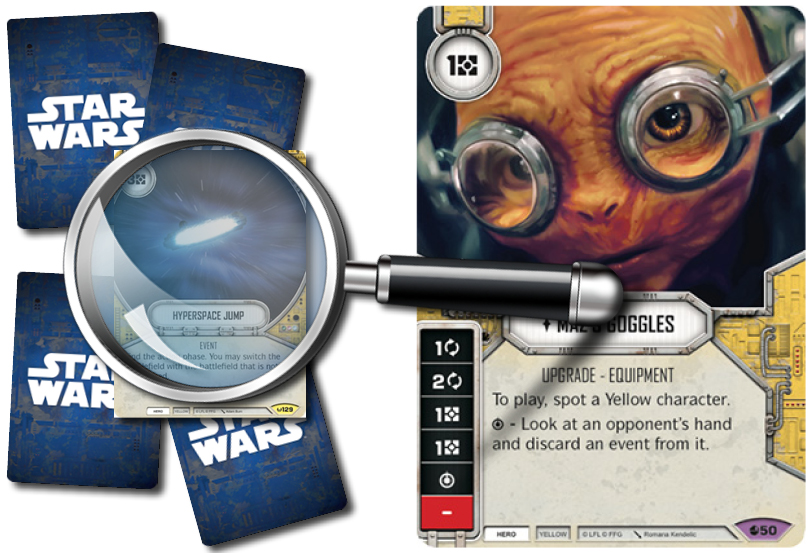 4. REMOVAL:I run 5 single removal cards in the form of 2 PINNED DOWN, 1 FLANK, and 2 SUPPRESSIVE FIRE. I also run 4 mass removal cards in 2 of both INTO THE GARBAGE CHUTE and EASY PICKINGS.

Pinned Down’s serve the purpose of what I call "point and click" removal. No questions asked you can remove a single die of your choice. It is important to have unconditional removal like that for emergencies and they usually come online towards the end of turn 1 in this deck. Flank serves the same purpose, but can lose its potency towards the end of the game when it gets down to 1 vs 1 character territory. Suppressive Fires are primarily there to take care of dice that Snoke is looking to Power Action. 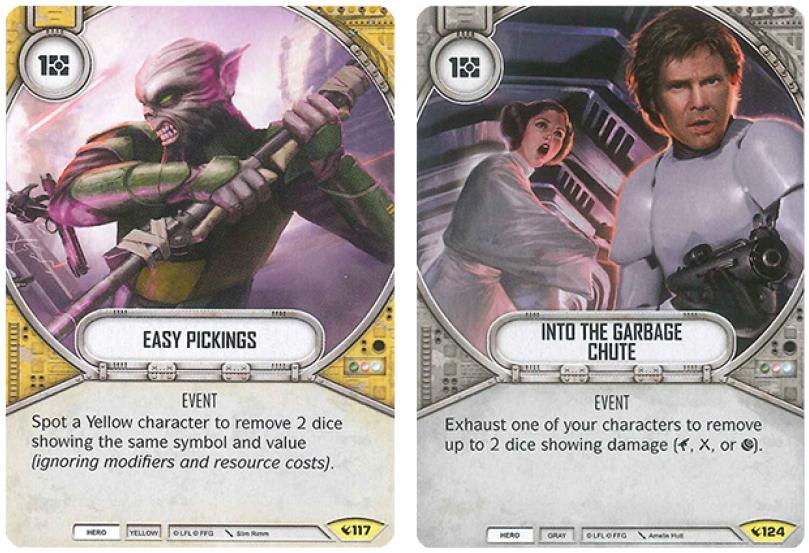 As for the multi-removals: Easy Pickings is just the best removal card in standard format, and Garbage Chute really helps extends your already high hp total vs high rolls (exhausting Wedge is usually the best if given the choice).
5. OTHER EVENTS: 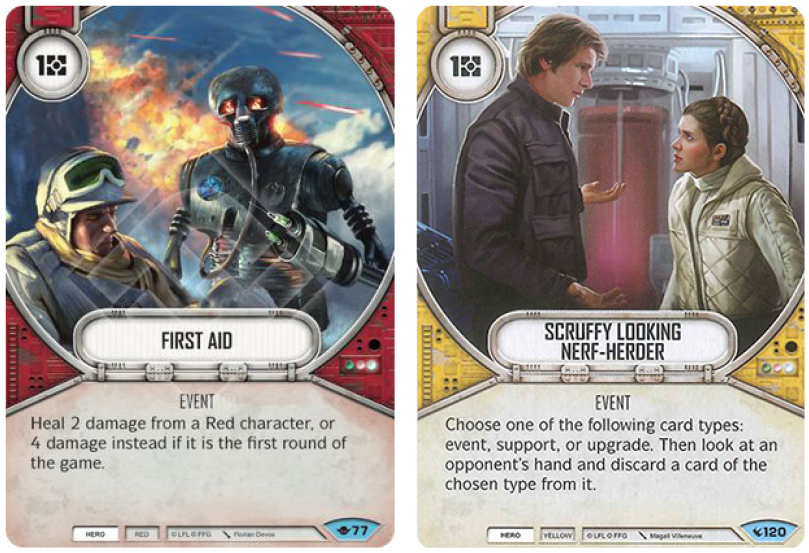 FIRST AID is brutally powerful in this deck with Rose generally being the correct choice for opponents to focus down. It is completely back breaking to heal for 4 turn 1 for just one resource. They might not be able heal the Hired Gun (as opposed to the Field Medic), but honestly Wedge and Rose do all the work in this deck so I think the trade off is more than worth it. SCRUFFY LOOKING NERF-HERDER is in there to find Hyperspace Jumps, or any other corner cases like Force Wave or Dark Ritual.
6. BATTLEFIELD:

Weapons Factory Alpha is the no brainer choice for this deck. It’s basically a Profitable Connections when you win the initiative, in addition to it being a complete dud for non-vehicle opponents. I have heard whispers of Docking Bay being a battlefield for the mill match-up, but I think that’s really playing not to lose as opposed to playing to win.
7. FLEXIBLE CARDS:The N-1 Starfighter, Resistance Bomber, and ARC-170 Starfighter are all flexible, but need to be replaced by other vehicles if you cut them. Into the Garbage Chute is a matter of preference as well, but I would recommend keeping at least one. The second C-3PO and Maz's Goggles are also very flexible and could be anything you want!
8. MULLIGAN AND STRATEGY:

The perfect opening hand would include: 1 Rally Aid, 1 First Aid, any 2 drop vehicle (Resistance Crait Speeder is the dream, but don’t pitch another 2 support to try to find one), an additional vehicle, and a removal card like Easy Pickings or Flank. If you don’t have any ramp cards in hand, you need to hard mulligan for them, although if you had vehicles in your opening hand I would keep at least 1, if not 2, unless they both are 3 drops in which case I’ll hold onto the better one for the match-up and pitch the other.

If you have multiple mitigation cards you don’t need, prioritize Easy Pickings and Flank over Pinned Down and Into the Garbage Chute. Flank is stronger earlier on, and Easy Pickings is always great. If you are playing against a deck whose character dice are going to try to make you discard your hand the Suppressive Fires are key, but they are otherwise mediocre to acceptable to rely on as your early removal.

If you win the roll off it is almost always correct to take your own battlefield, due to the power of the effective free resource it will give you.

As a final note, if I lose initiative, I like putting my shields on Hired gun if I have a First Aid in hand. I do this as a way to try to corral my opponent into dumping damage onto my red characters so I can make full use of my First Aid.