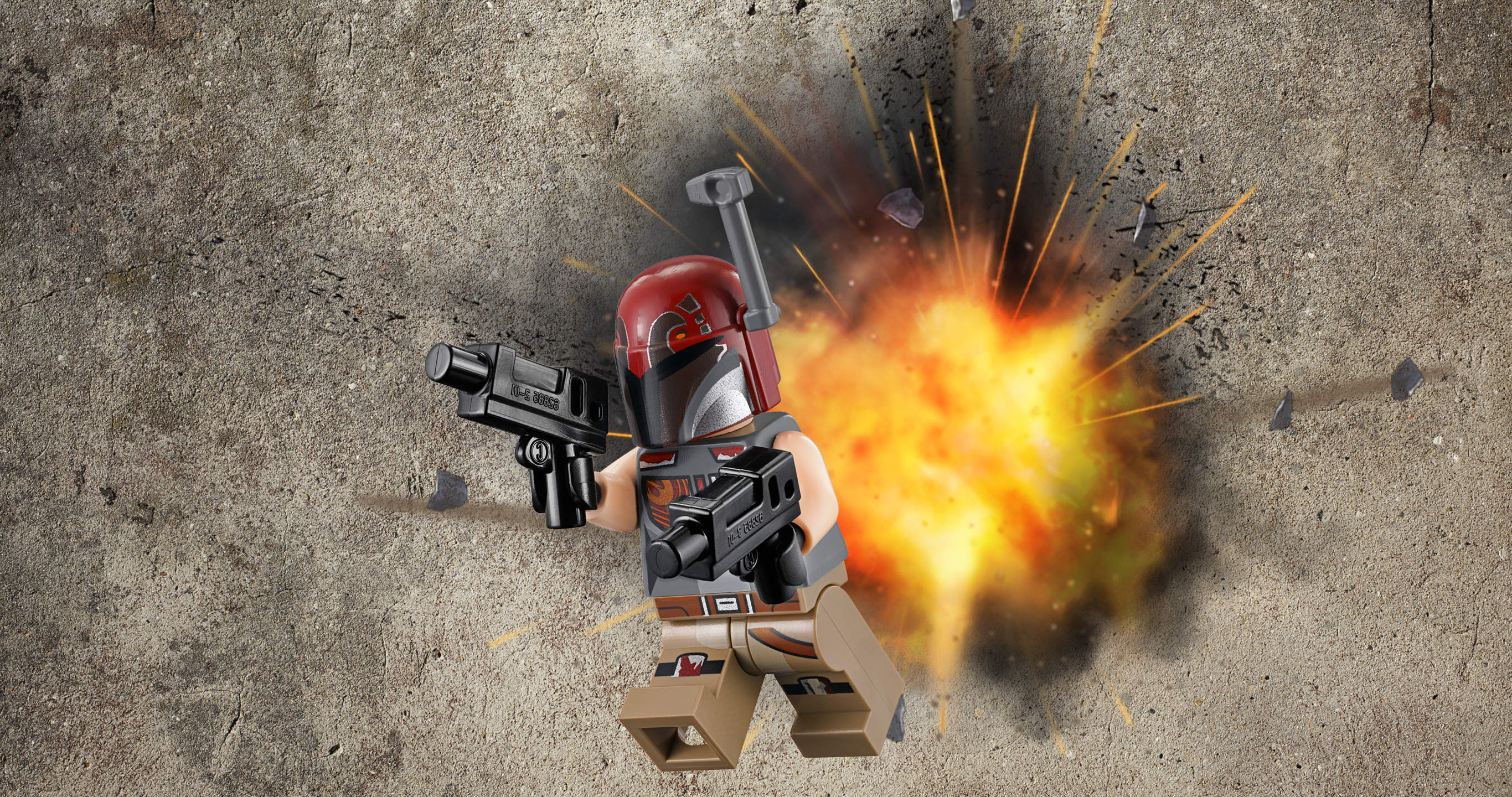 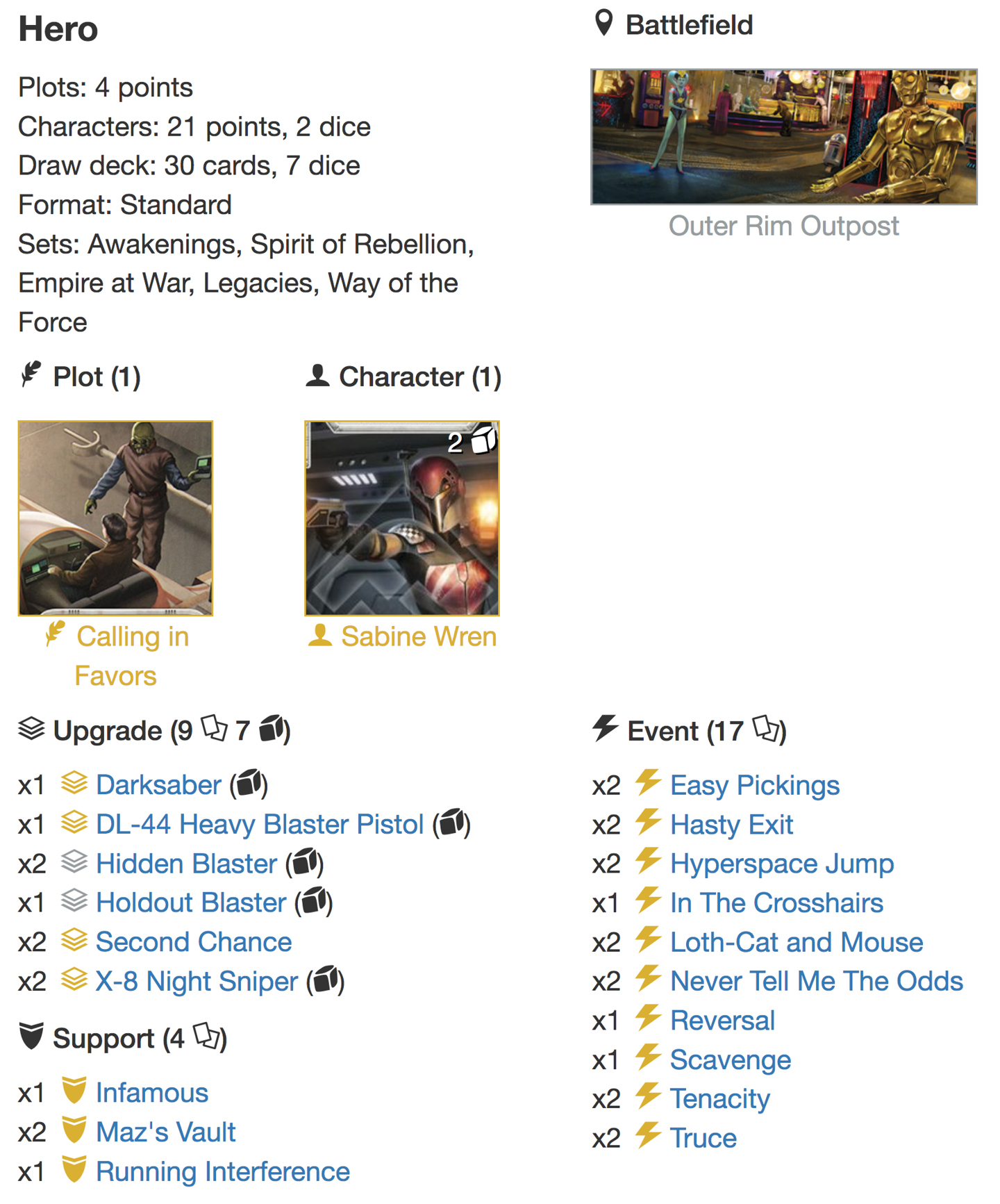 1. GENERAL COMMENTS:
For some more thoughts on Sabine Wren, and the future of one of the most loved AND hated Star Wars Destiny characters read through the great article written by Brendan Devitt.

This article is in its essence going to be a critical look at how Sabine functions when she is going to battle on her own lonesome majestic self. There are a lot of iterations of Sabine decks and there are some eSabine/Clone Trooper decks that have performed quite well, although not nearly as consistently as the original powerful eSabine/eEzra build that blew apart all opposition at Worlds 2018 until stopped in its tracks by Kylo Ren.

The deck that's going to be the focal point of this analysis was designed and piloted by Mike Rudin of the Jedi Trials to a Store Championship win earlier this season, although the meta has developed significantly since then, and is really unfavorable to Solo Sabine Wren decks, it might still be fun to take her for a spin!
2.CHARACTER: 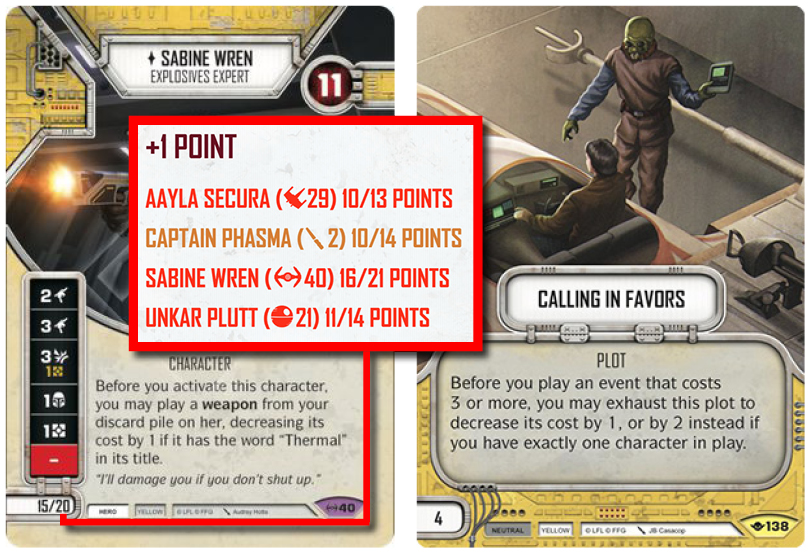 Sabine Wren is just such a weirdly designed card. Some would say outright broken. I'm not saying that is the case, but she sure is designed in a way which makes it understandable that some people are screaming broken.

And apart from Cad Bane and other characters bolstered by Quickdraw her ability is unique to Star Wars Destiny, and many would claim that the game is better without it! 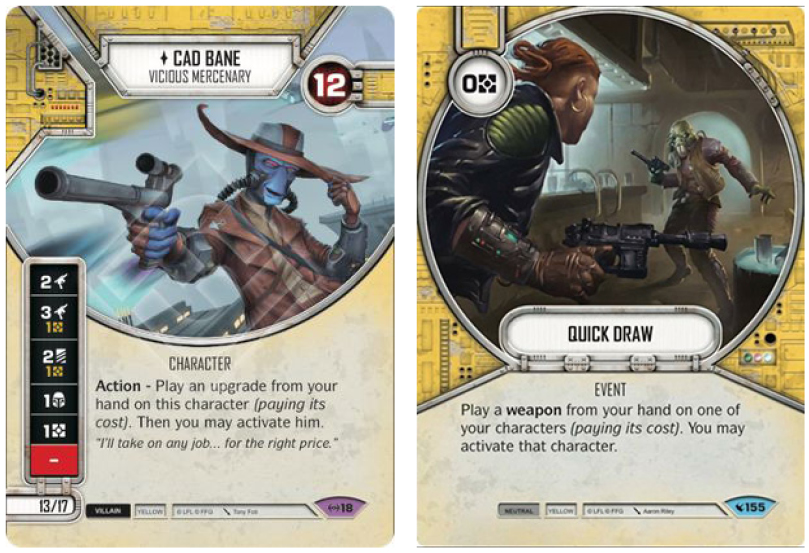 Being able to play the game the way Sabine (did) does is inherently incredibly powerful. She might not be the toughest character in the game, boasting only 11hp in a world with Kylo Ren's and Luke Skywalkers doesn't look all that impressive, but she's a hardhitting motherf*ck**. Most players who have been on the receiving end of her wrath can testify to the fact that hell knows no fury like a Sabine Wren with an X-8 Night Sniper. Alright, it wasn't all that bad. If you want to know why then read our article on Game Theory - Changing Your Attitude.

It did not take long for most people to declare Sabine Wren dead upon arrival of the Holocron for Standard Format, and not a lot of people seemed to sad about it. Well ... it didn't take Sabine Wren long to blast down the cemetary gates like a bat out of hell!

For some it was the final proof they needed to declare Sabine broken beyond repair and for others it was rather a testimony to the fact that the game design of Plots was working, just like it had done with Rey2/Aayla. And while that deck was effectively dead due to Aayla also being nerfed ... you know ... when FFG closes a door it also opens a window. That window was Sabine Wren going SOLO and she was Calling in Favors (we'll talk about that card in a minute).

In the beginning, I was in doubt whether or not the whole Solo Sabine thing was a funny gimmicky thing or if it was the real deal (it's NOT the real deal), but having watched a few games in our local gaming club: ASK, I'll at least consider the deck tier2. Don't get me wrong here, Sabine will never again conquer the world of competitive Destiny. There will never again be an episode of the YOUR Destiny Podcast where we talk about how incredibly powerful she is ... she is outmatched by the best decks in the format, I'm certain of it, yet she is not completely dead. 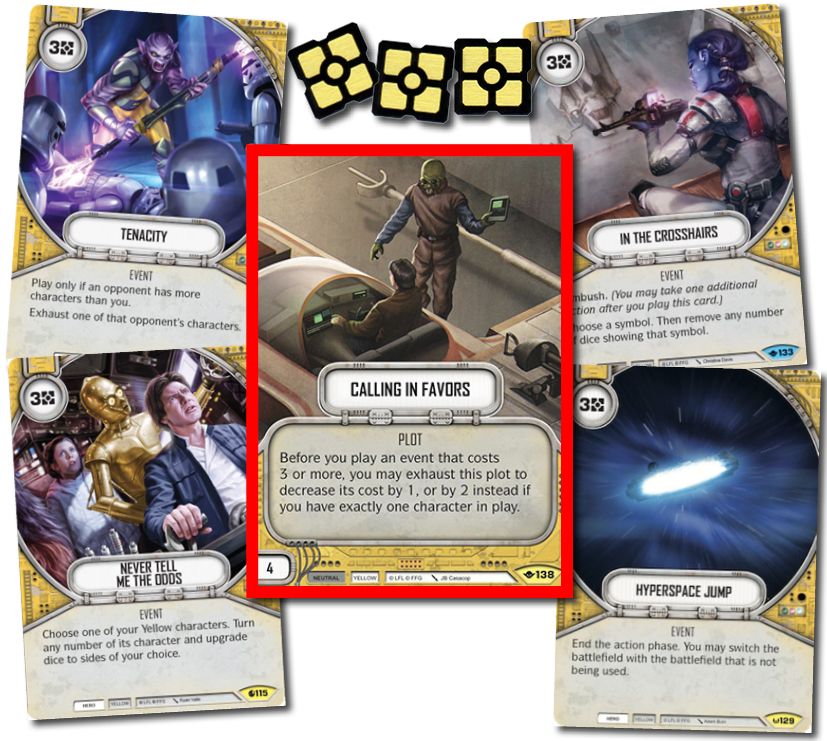 Honestly though. How often did you put two copies of Tenacity in your deck? All the time? Riiiight ... you've probably never played it before, neither did I. Why? Because it's feels incredibly overpriced and would be unplayable in most decks. The risks involved with a card like this is just seemingly too high compared to the reward.

CALLING IN FAVORS simply makes bad and unplayable cards good. Tenacity just went from a bad card (I'd probably have rated it 2/5 if giving a set review now), but imagine if it was 1 resource rather than 3? We'd probably be looking at one of the best cards in the game. Sure, Never Tell Me The Odds and Hyperspace Jump were staples in many decks, but they took time to set up. The resource management had to be in place and the trap sprung at the right time, and most good players would be able to smell that Hyperspace Jump coming from afar doing their best to bypass it. But with Calling in Favors it's a different story. It can be played any round and at any time, it requires almost nothing to set up, and it strikes as lightning. Same thing can be said about In The Crosshairs, which I already gave a 4/5 review in my original Way of the Force set review, but at 1 resource it is really out of this world removal.

I'm not saying that you would want to play all of the above cards in a Solo Sabine deck, but if Bravado was just 1 resource to remove a die and deal 2 damage to any character, you'd be screaming like a school girl who had just seen Justin Bieber! Free Entangles? Yes, please!

If Profitable Connections was the beginning of how we came to understand the power of Plots, then I guess Calling in Favors could be the reason we'll love them! Is it worth the 4 points? And in the case of Sabine also the loss of another 7+ hp and at least one character die ... that's the real question.

In trying to approximate an answer let's just say that this deck can pull off stunts that no other deck can replicate.
3. UPGRADES & SUPPORTS:The original eSabine/eEzra ran 8 Ambush weapon upgrades: Two each of Hidden Blaster, X-8 Night Sniper, DL-44 Heavy Blaster and Holdout Blaster, listed in the order of preference and power. The only reason why Holdout Blaster was included in the first place was because it had Redeploy, allowing Ezra to possibly taking over and finishing the job started by indomitable miss Wren, and finished the lineup of necessary Ambush weapons. Had heroes had access to the LL-30 Blaster Pistol, the Holdout Blaster would never had made the cut.

It's only natural that the new iteration of Solo Sabine takes a critical look at the upgrade line-up and while it keeps much of the original bulk, it also needs to reshuffle a bit because it runs more proactive and aggressive events, while at the same time trying to maintain momentum and pressure from sustained gunfire. 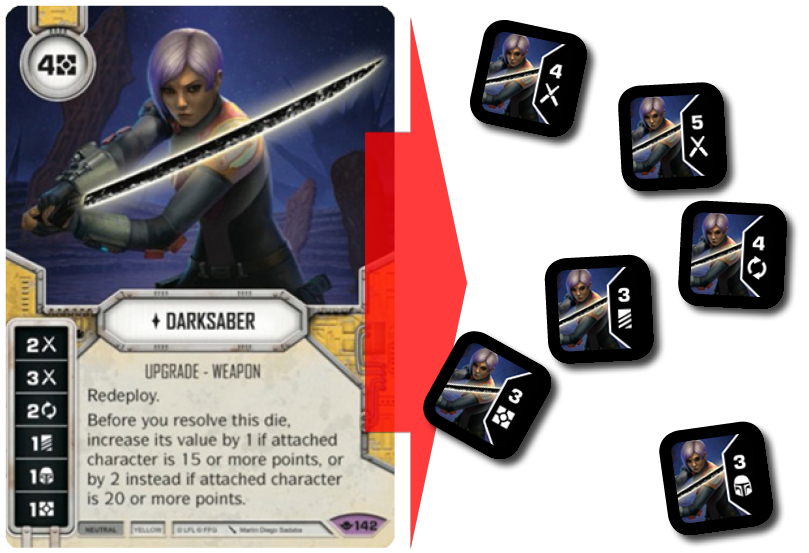 DARKSABER
My guess is that the Darksaber is more of a gimmick than anything else. It's obviously a massive weapon in the capable hands of Sabine Wren, but it doesn't really seem to fit the bill on quite a few accounts. This deck wants to be fast, it wants to kill fast, and failing to do that, it wants to get out of jail. But it cannot be discounted though that the Darksaber looks pretty scary on Sabine. Good thing is that if you draw into it early, you can always discard it and bring it into play later! You'd probably want to run two copies of DL-44 Heavy Blaster Pistol, but Darksaber is an interesting backup plan.

SECOND CHANCE
Sabine needs to stay alive (SURPRISE!). In a deck with this kind of cheap abusive removal, well ... the 10 extra health you effectively gain from the Second Chances might actually just be what you need to swing the odds in you favor. Don't way too long putting the Second Chance on her - Action cheating is still a thing!

INFAMOUS
Being able to play some of the best mitigation in the game for either 0 resources or 1 resources is just crazy good - being able to do so with Ambush is well ... And it can effectively work as a replacement for Running Interference, using Infamous to play cards like Never Tell Me The Odds can be a backbreaker!

MAZ'S VAULT
Even with cheap events a plenty you need to maximize on your resources, and you'll want to see an early Maz's Vault. Don't hard mulligan for it, but keep it if you find it. Going into round 2 with three resources can be absolutely massive. It'll allow you to play an upgrade and reliably play at least 2 mitigation cards.

RUNNING INTERFERENCE
You know the trick! Save it until you need it! And just to make absolutely sure: Running interference is being used, and set aside, in order to prevent your opponent from declaring the same action as you! 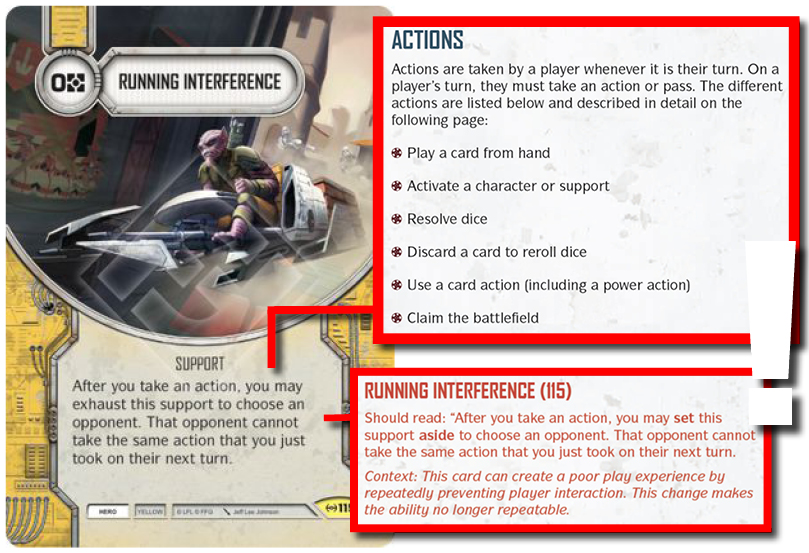 4. EVENTS:As already discussed, your mitigation is stupidly cheap and most of it can be played for 0 resources, meaning that you can arm Sabine Wren from the Discard pile while still being able to play mitigation (remember it's just 1 mitigation card per round that can be played at a discount though).

The blow out mitigation and events are: 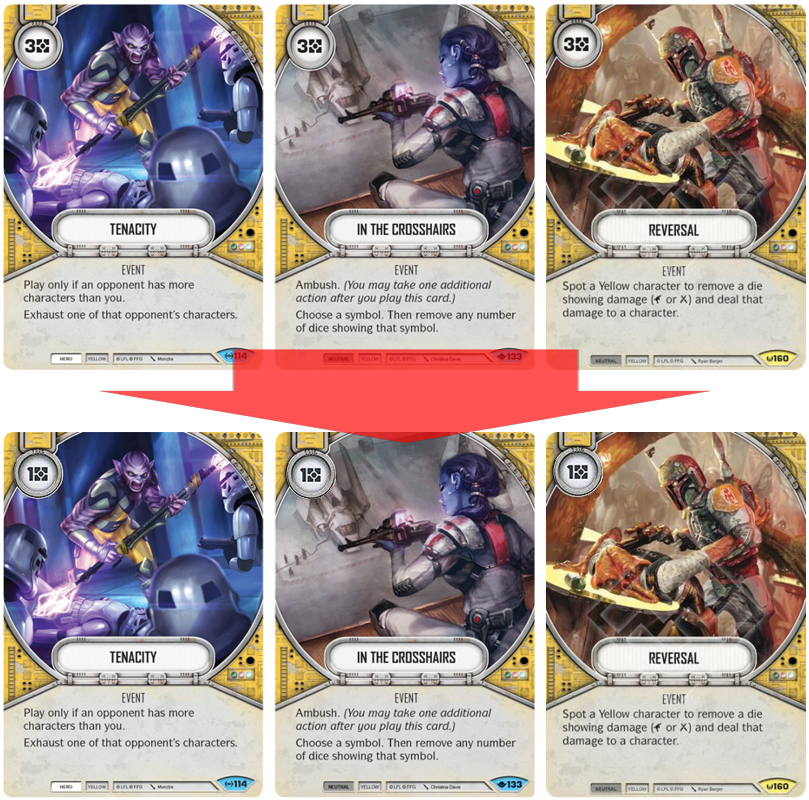 While cards like Hyperspace Jump and Never Tell Me The Odds are staples in Sabine decks and just got so much better and flexible!
5. BATTLEFIELD:This is a deck that wants to have a active Battlefield. Solo Sabine might just be the fastest deck in the format. It wants a battlefield which is benefitial to its own game plan, but IF given the choice, i.e. it wins initiative, you'll probably never choose your own Battlefield. You are starting with a mere 11hp in a meta full of 3wide and 4wide decks that can boast 30+ health. You will ALWAYS want the Shields, and then swap Battlefields at the first given possibility using Hyperspace Jump.

There are a lot of aggressive Battlefields out there, the 2 best choices would probably be Outer Rim Outpost and Frozen Wastes, while it's not entirely clear which one is the better for the deck.

While Outer Rim Outpost allows you to sift through your deck and gather enough resources to play both upgrades and most mitigation every round, Frozen Wastes can serve as great protection against powerful character dice, i.e. Kylo Ren (who'll btw. still be a VERY VERY tough match up ... probably close to unwinnable).
6. MULLIGAN OPTIONS:You will want two guns in your opening hand and preferably a Maz's Vault to stabilize your resource management. And because you are so incredibly vulnerable you'll probably also want to see 2 pieces of mitigation. Don't keep Hasty Exits because, as stated previously, if given the option you'll not want to control the battlefield.