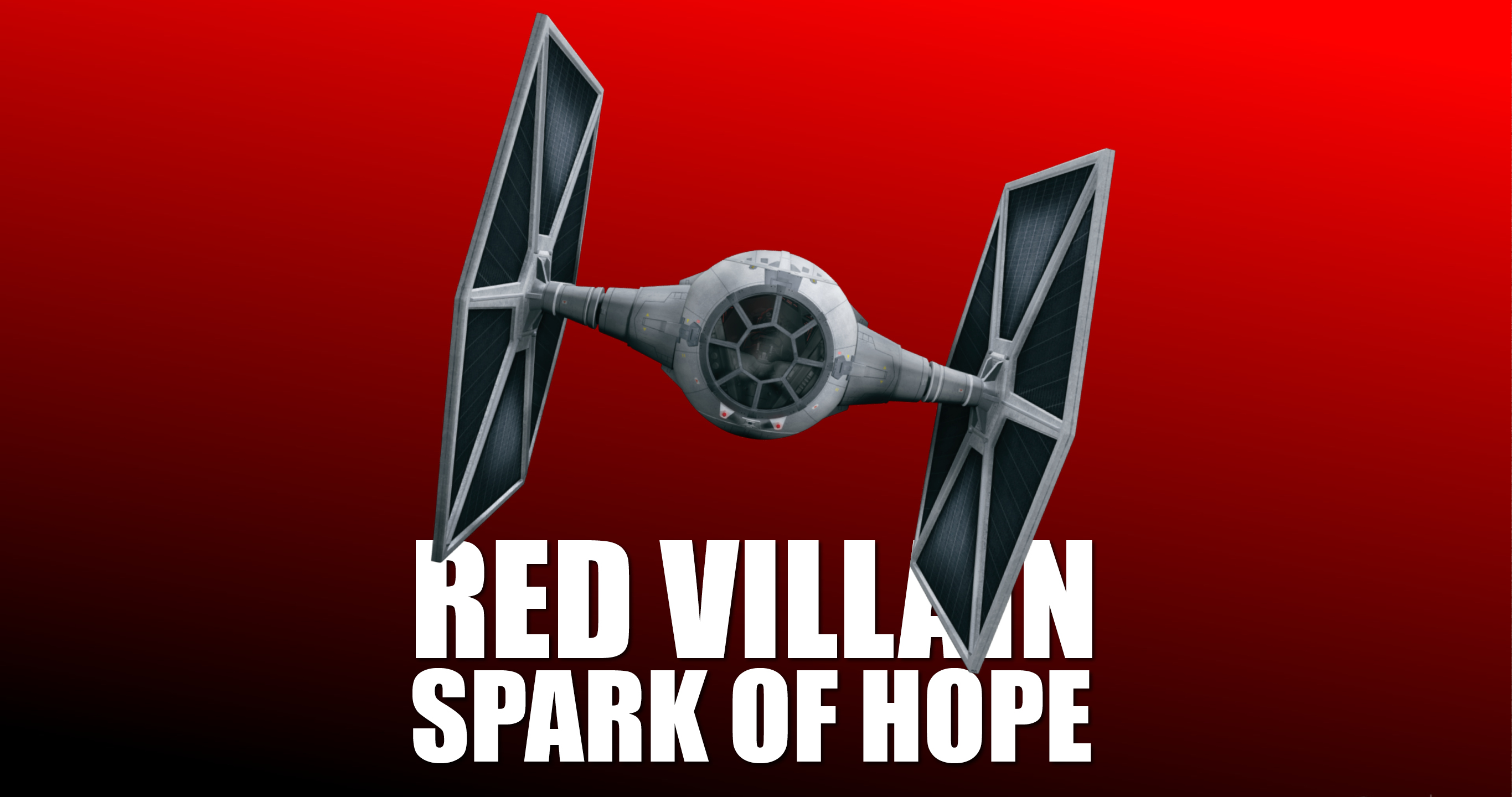 There are links to all the other parts of the set review at the end of this article! (The links are not currently active until the entire set review has been published.)
1. RED VILLAIN CARDS:Written by MARK LOCKETT

Red Villain is in a great position coming out of Convergence with great variety in what it can bring to the table. Captain Phasma’s straight up aggression. The support utility of Wat Tambor and you can even play mill with the likes of Wulff Yularen and Nute Gunray. With a great suite of supporting cards already like the reprints of Probe and The Best Defense... or the newer power of Megablaster Troopers and General Grievous, it’s going to take a pretty decent card to make it into competitive decks. Let’s see what the design team has for us in Spark of Hope.
2. RED VILLAIN CHARACTERS: 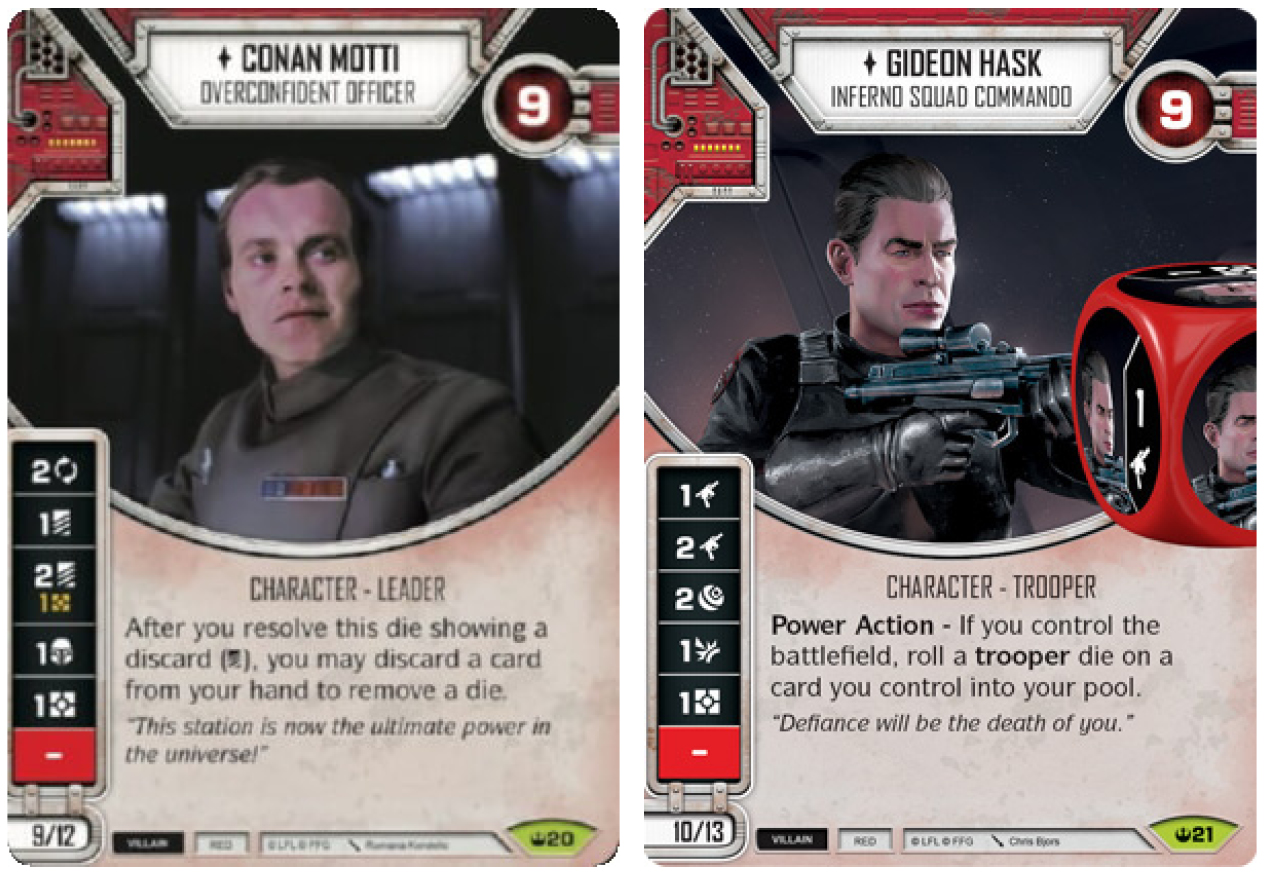 CONAN MOTTI (2/5)
A solid character boasting a point cost equal to health for a single die. Conan is that sort of character that you roll in and are likely to be happy with whatever you get. He has the potential to be a great mill character with a 1 and 2/1 Discard side and an ability that if you resolve Discard then you can discard a card to remove a dice turning any card in your hand into removal. Unless you can cheat in Conan, your opponent will see it coming and can play around it. Mill seems to get hit a little in this set too and that is the deck he’d be the best in.

He’d see way more play especially in support decks if we didn’t have Wat Tambor already at the same point cost. The usefulness of his ability though will see him make it into play on occasion maybe even alongside Wat but I’d stress that it’s still unlikely. He’s very similar to Wulff Yularen and we haven’t seen him at all at the competitive tables.

GIDEON HASK (3/5)
I personally really like Gideon a lot. There is a lot going on for him. We have a Trooper which already has a lot of support from Convergence. He also has 50% damage sides that are all base sides of which two are a 2 side. At 9 health he is certainly a little squishy but the longer you can keep him alive the more chance you have of using that Power Action and rolling a trooper dice in which could be an Iden Versio die, a Vader’s Fist die or even his own die if his partners have fallen foul of your opponent’s game plan. I can see him make it into 2wide and 3wide decks. Any more health on this guy and I’d have put him at a 4. The design team got this just right I feel.

MUDTROOPER (4/5)
I’ve not heard much chatter about this guy just yet. People seem to see him as a replacement Stormtrooper if you have 8 points left to build your team and not 7. While this is true, he brings much more than that. FREE REROLLS of BLANKS when he or a leader is activated. I don’t care how good a player you are, but you’ll roll Blanks and this saves you throwing away cards to re-roll. It won’t be long before you sit opposite 2 of these and an elite Snoke, that’s 3 free re-rolls of your Blanks until a character is defeated. That’s never a bad thing.

THRAWN (2/5)
This is a difficult character to evaluate. The theme of Thrawn knowing what your opponent will be up to next and using it against you oozes out of this card and it is a very useful ability. The issue I have with it is that to use those cards you’re going to need extra funds for it on top of playing your own cards and if you can’t make use of what you see then that part of his ability is essentially useless. There is however a lot of 0cost cards seeing play in most deck’s event suite such as Forsaken, Hidden Motive, Logistics and Sinister Peace to name but a few. His ability has to be seen as a potential bonus which means that he has to be good without it and I think his points are too high for this to be true.

With only 11 points left for his partner, looking at what we have at 11 points at the moment none of them seem to cut it. The massive bonus is you are going to know almost exactly what is coming at you next turn and theoretically could have stripped out a useful event and left a clogged-up hand of upgrades and supports for your opponent. It still doesn’t mean you’ll be able to stop what you see. A lot of people are going to try Thrawn out but I don’t think he can make a huge impact.
3. RED VILLAIN DOWNGRADES:

PRIORITY TARGET (1/5)
A very odd card being a bounty but in red. Getting to take control of the battlefield and use its ability again when an opponent’s character is defeated. A lot of battlefields could give you 1 resource but then you can play Wanted instead and get 2 resources from the bounty. I can only see this being useful in a deck running Mean Streets or in a Vader deck that is on Fighting Pits.
4. RED VILLAIN EVENTS:

COUNTERINTELLIGENCE (5/5)
Who doesn’t want to look at their opponent’s hand and put an event back on the top of the deck. It’s an instant first play of the round and an auto-include for any deck including a Red Villain and a Leader. Did we need another reason to be playing Aphra and Sentinel Messenger. They are about the only counter for this.

CRUSHING ADVANTAGE (0/5)
Never touching a deck list. Too expensive and too situational. Very unlikely to get its full effect and if you are ahead on all those dice possibilities then you’re already winning or your opponent hasn’t rolled in yet.

EXECUTE ORDER 66 (3/5)
This will see a lot of play, certainly in the early meta until it can be determined how good it actually is. I’m on the fence at this point but will most likely be giving it a go early on as I think it has the potential to be a foundation for a pretty mean deck. There is DJ waiting in the wings ready for his day to shine. This card may just help him get there.

RALLY THE TROOPS (1/5)
Well this is pretty much a Red Villain Sound the Alarm but has extra add-ons. It would need to have Ambush for you to be considering using a re-roll for matching subtypes of your own characters. You can do that already for all dice remember. Resolve two of your dice could be decent – Focus into something else but you can have a much bigger impact with a Tactical Mastery or Seize the Day where the dice number isn’t limited. Fairly useful in draft matches though.

TO VICTORY (1/5)
It’s cute and may see some play. Especially if these low health characters become popular in competitive play but I can’t see that happening. I’d prefer to just throw down a Bounty and get 2 Resources for killing the one character off.

WARNING SIREN (3/5)
It’s a solid 1cost removal option and will be online a lot of the time. Only issue is that it may well be online but not for the dice that you really want to remove right now. It is at least able to hit non-damage sides so I think it will see plenty of use due to it’s utility.
5. RED VILLAIN SUPPORT:

CULTURAL RECORDS (1/5)
I want this to be good, I really do but I can’t convince myself. You need it turn one for it to have maximum effect and then you need to roll the 33% chance to get the special for its effect to kick in. I’d prefer to have the immediate benefit and dice of Senate Chamber at the same cost.

HOSTILE TERRITORY (3/5)
This is great in a lot of decks. Extra guaranteed damage turn after turn if you can secure the battlefield by being faster gets two thumbs up from me. 2wide decks are going to love this extra bit of punch and I have an inkling that they could be coming back strong.

SEPARATIST EMBARGO (5/5)
If there was ever an auto include for a deck then this is it. Stop your opponent playing a key piece of their game plan or something they have that could hurt you. No longer will your key Support or Upgrade be Vandalised if you don’t want it to. It’s a shame that you have to be Red Villain only to use this but I think if it got anywhere near Hero then the Shadowcaster re-set would be back stronger than it was before. It makes perfect sense to be where it is but it does feel like the villains get all the best toys. 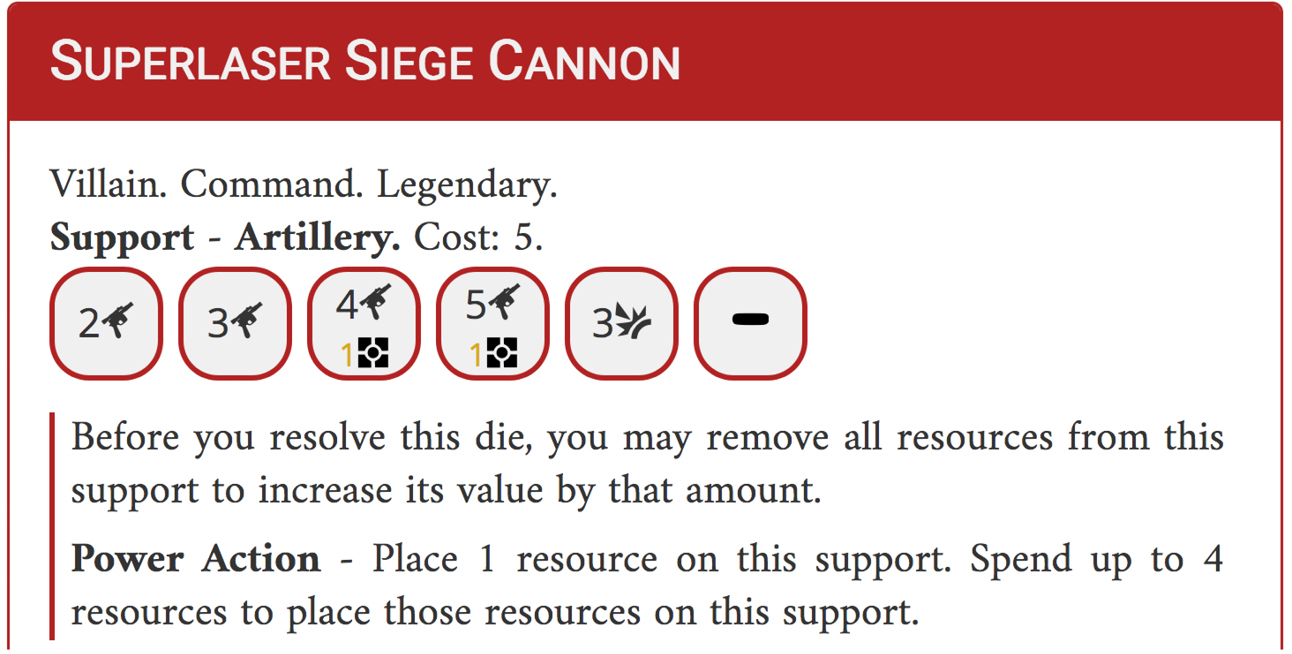 SUPER LASER SIEGE CANNON (2/5)
It’s no Vader’s Fist or even Megablaster Troopers but it could do some damage while you build up a bundle of resources on the card to cheat out a killer blast but that’s about the best you’re going to get from this and the investment is unlikely to be worth it over other options.
6. RED VILLAIN UPGRADES:CRIMSON STAR (1/5)
Seems a bit of a pointless card. You have to defeat someone first so you’re already doing okay. By that time you might get 2 opportunities to use this. It may see minor usage in a deck that has Red Villain characters where Bacta Therapy is also being used but other than that you’ll find better cards. It gets better if the low health diceless characters become popular.

MASTERMIND (4/5)
Now this is what you want from a 1cost upgrade. Very solid card. Certainly improves if you have seen your opponent’s hand somehow. Thrawn and Wulff Yularen especially love this but you could quite easily have a fairly educated guess at a card with the Special anyway dependent on what character line up your opponent has or just call out a card that would hurt you at that moment. If you don’t get the special it boasts two Focus sides and a Resource which are always handy to have.

TL-50 HEAVY REPEATER (2/5)
It’s a better version of the Repeater that came in the Rivals Draft kit. The Draft Kit Repeater never saw any constructed standard play time. This will see a little more thanks to the Power Action when on a Trooper as focus abilities on cards really are handy. Probably only going to see play in Trooper decks due to the cost but definitely more playable over the other 3cost guns like the Auto Cannon.
LINKS TO OTHER REVIEWS:
BLUE VILLAIN REVIEW
YELLOW VILLAIN REVIEWBLUE HERO REVIEW
RED HERO REVIEW
YELLOW HERO REVIEWBLUE NEUTRAL REVIEW
RED NEUTRAL REVIEW
YELLOW NEUTRAL REVIEWGREY CARDS REVIEW