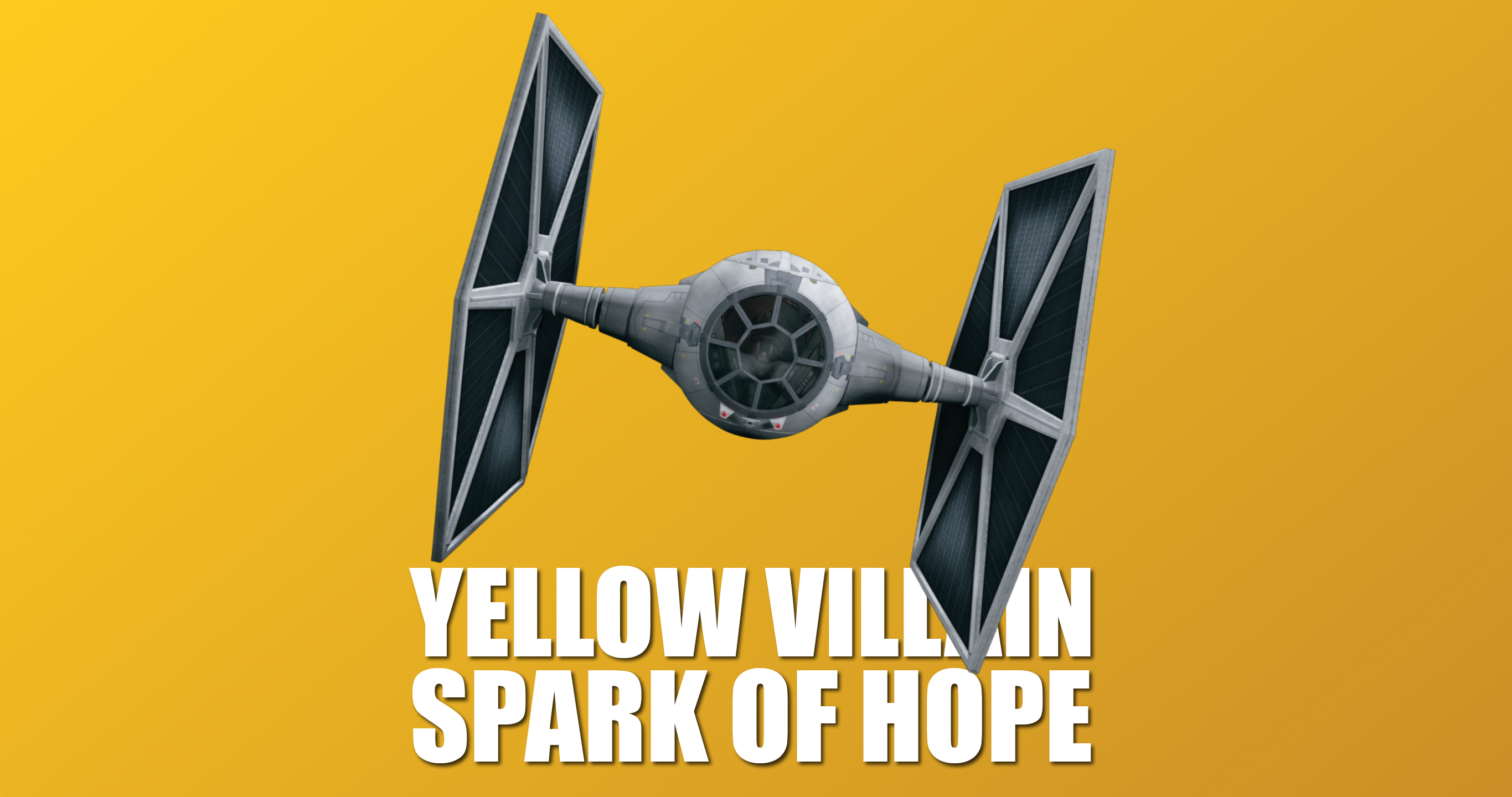 There are links to all the other parts of the set review at the end of this article! (The links are not currently active until the entire set review has been published.)
1. YELLOW VILLAIN CARDS:Written by LAKE QUITTMEYER

Spark of Hope is coming in with a bang for Yellow Villains. With a heavy focus and enhancement on the Bounty Hunter subtype, Yellow Villain is really looking to create a unique identity for itself. This is of course in addition to regular additions that Yellow Villain brings: Namely strong events.
2. YELLOW VILLAIN CHARACTERS: 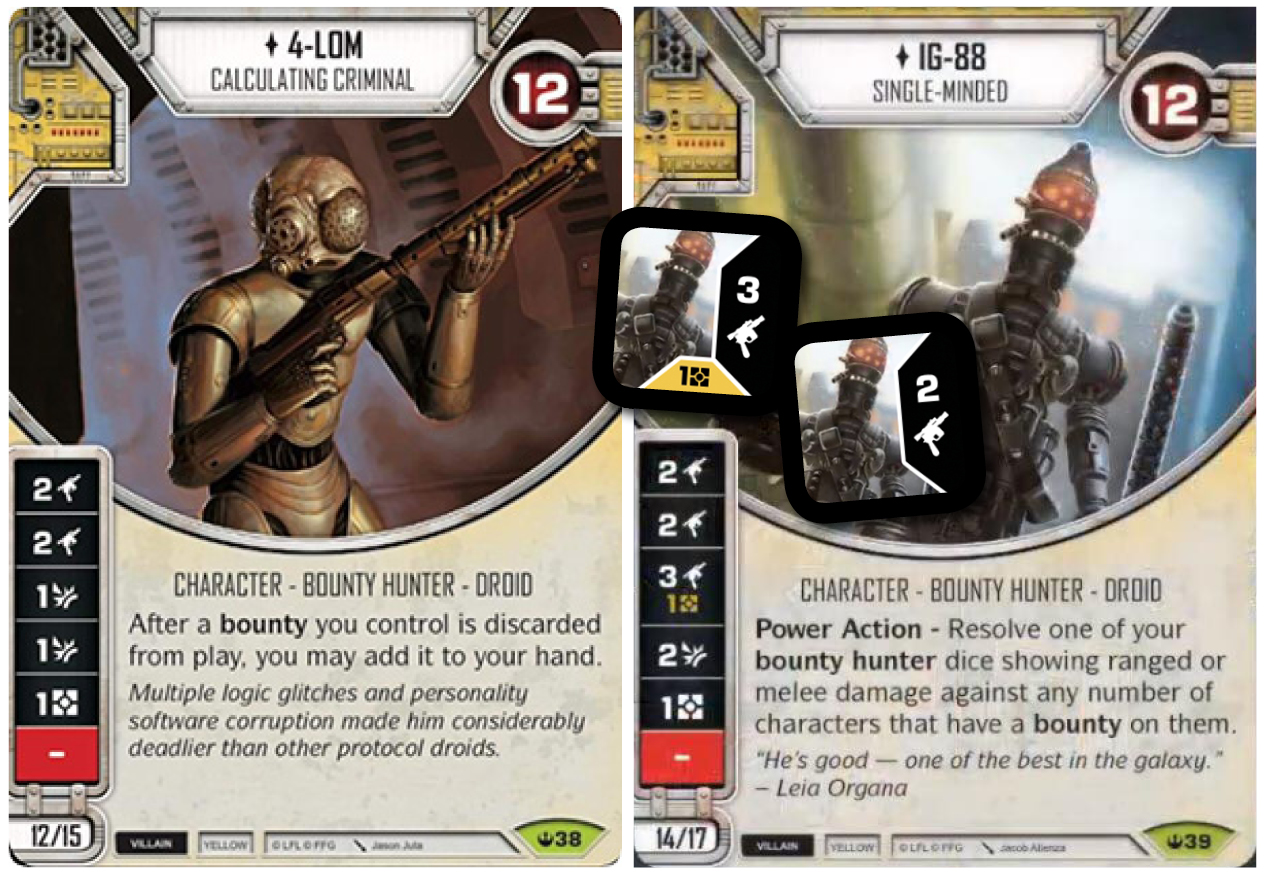 4-LOM (3/5)
Let me lead off with saying I have very high hopes for Bounty Hunters this set. This is important to mention because it will raise my overall stock in Bounty Hunter cards past what they look like on the surface. So, now onto 4-LOM. I see a high hit point character for 15 points (why is it so high? 4-LOM looks kinda scrawny), with decent die sides and what I predict will be an acceptable but not amazing passive ability. The passive ability should get better vs. 3+wide lists, but worse against say Big/Little lists. This guy’s playability is going to come down to character pairings, but I should say that I think there are other Bounty Hunters that are going to step up to bat before he will. Overall, I think 4-LOM is so-so with his hit points being his largest draw.

IG-88 (3/5)
I really like IG-88 - Singleminded, and it’s not just because the original IG-88 was the first character I played in Destiny. IG-88 sports a high amount of health, 50% damage sides (real sides, no 1’s *cough* Jango), and an incredible Power Action, which can be massive if allowed to fire off against several characters. Yellow alone has 3 playable bounties by my count, and a Tutor engine for them in the form of Bounty Board so I don’t see finding Bounties to be a problem for his Power Action. Only problem might be his high cost 14/17e, but he should be able to have plenty of character pairing options. 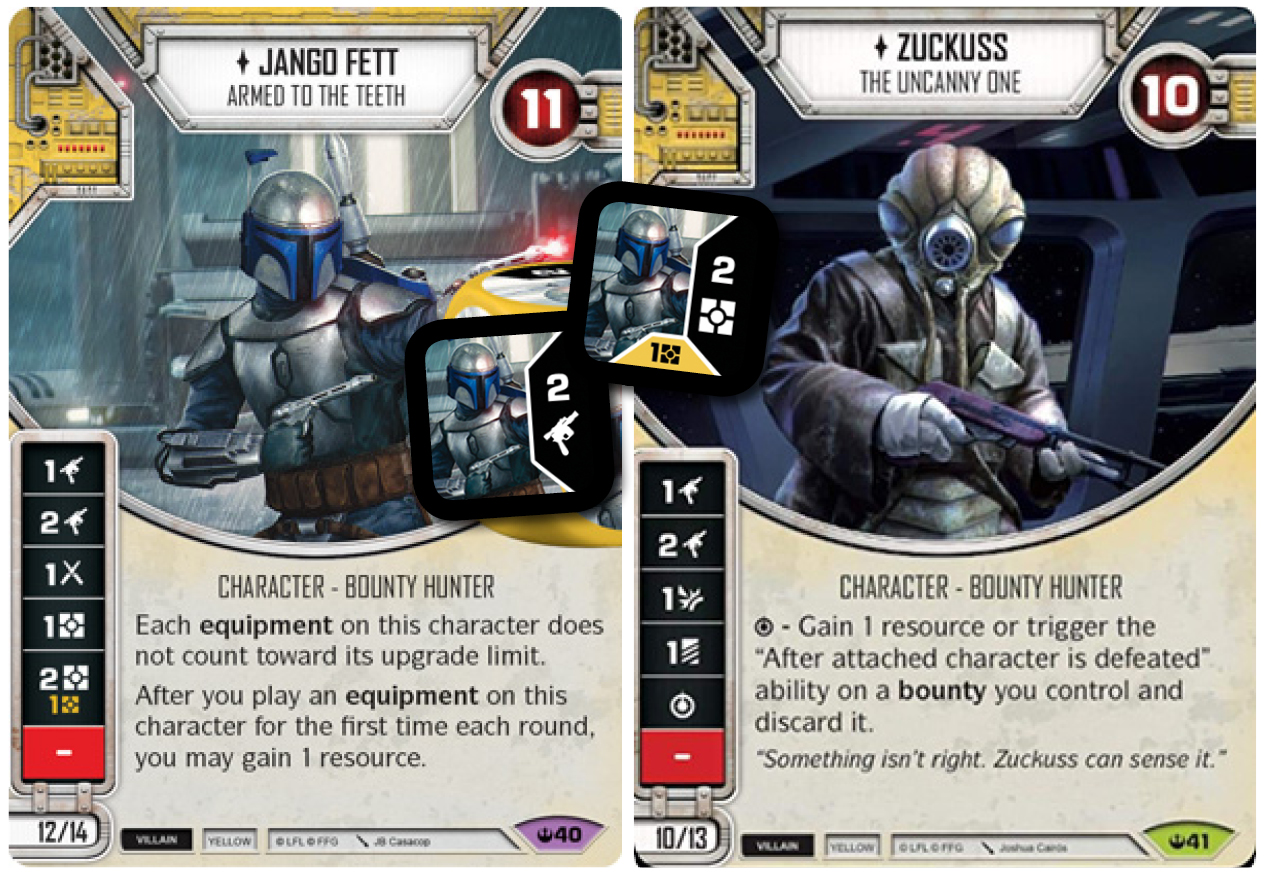 JANGO FETT (4/5)
I have mixed feelings about Jango Fett. He has plenty of character pairing choices at just 14 points, and could even be squeezed into a 3wide deck, and 11 hit points is a relatively healthy amount. He is also a Bounty Hunter, which as I mentioned earlier I like a lot. He also has a solid passive ability (hello Armor Plating and Mandolorian Vambraces!), but his die sucksssssss. Actually, the sides are fine, but the values are the problem.

Having two Resource sides is great, and three damage sides sounds good until you see that there are a pair of 1’s in there. Jango Fett is going to be reliant on his free equipment to help boost his damage, and/or give him enough tankiness to help him grind out games with his less than average damage sides. I'm going to be optimistic and give him a (4/5), but I could also see him not seeing much high level play at all.

ZUCKUSS (2/5)
I don’t really like Zuckuss. The best part about him hands down is his subtitle, the rest is underwhelming. His die is pretty meh, including the Special, which albeit is really nice with Enticing Reward, fairly good with Wanted but then after that it is sort of whatever. I don’t think its enough to fix the rest of the die though, and I can’t imagine too many good pairings for him at either point value outside of the cookiec-cutter Zuckuss/4-LOM team.
3. YELLOW VILLAIN EVENTS:

ARMED TO THE TEETH (0/5)
Armed To The Teeth, which is a reprint, is VERY expensive burst damage. If it’s not closing the game for a win, it’s probably completely useless. There are better burst options these days, namely Fight Dirty for Yellow.

DESPERATE MEASURES (5/5)
Praise the Emperor, we finally have a no questions asked way of killing supports. I expect the existence of this card alone to send FAT Vehicles to the abyss, and honestly I’d much rather take 5 Indirect damage than let a Vader’s Fist run wild. Taking 2 damage to stop Anakin Skywalker’s Podracer seems great too. Do I need to keep going? I expect a lot of decks to run this, ESPECIALLY at first.

MISINFORMATION (0/5)
Don’t play this. Unless you are stopping some sort of Discard Pile shenanigans you are just hurting yourself by letting your opponent… draw cards that they already wanted to draw enough to put in their deck? Sure you could put cards that have invalid spot requirements once things start dying but… I think I have already spoken too much on this card.

TIRELESS PURSUIT (3/5)
As long as Bounties pan out, and I think they will, this card is solid in aggressive decks that want to “correct” some Indirect damage they have spread out to help burst down their primary target.
4. YELLOW VILLAIN SUPPORT:

BOUNTY HUNTER'S GUILD (1/5)
I can’t really see this being an important part of any Bounter Hunter deck. Sure, it adds speed by allowing you to activate a character after playing a Bounty, but it seems a bit superfluous, while raising the downgrade limit is probably never going to be a real need.

IMPOUND (4/5)
The design team essentially put Ketsu Onyo’s passive ability on a 1cost support. It is a very strong passive, but it unlike Ketsu this can’t grab Redeploy weapons as they do not get discarded. I think this card will be very strong, with the caveat that weapon/equipment upgrades need to be viable this set.

MIST HUNTER (2/5)
I like this new move that is making supports roll in automatically at some point during your turn. Historically support cards have had trouble getting into aggressive decks because of their massive tempo loss. Now they are more analogous to Redeploy weapons. That being said Mist Hunter is worse than several of the current Redeploy weapons so I can’t rate it too highly even with its flavor interactions.

PREDATORY BANKER (0/5)
I don’t really get this card. Generally speaking resource rich decks move pretty slowly, and are not likely to have control of the battleground. Which I suppose relegates this to support mirrors. If that is its purpose I think it is a bit late given that Snoke’s nerf and the departure of chance cube have really put the hurt on both villain support decks and the amount of support decks that are running around. I’m going to give it a 0, it’s just a bit too odd for me.
5. YELLOW VILLAIN UPGRADES:

PROTOCOL MATRIX (4/5)
While not super strong, this upgrade is very efficient for its cost. It also has a surprisingly high amount of targets in villain so it should not have too much problem finding a home. Im down with 5 damage sides on a 1 cost upgrade, which is the perfect cost for me to overlook 1 sides. It might end up doing nothing, but I’m pretty optimistic about this one.

ARMOR PLATING (3/5)
Look who’s back! I expect it to see slightly more play than last time thanks to Force Illusion’s departure. I think people slowly learned from Riot Shield that cards like aren’t real replacements for Force Illusion and aren’t auto two of’s in Force Illusion’s absence. I do think the new Jango will take these every time though if he is able to take flight in the format.

GAUNTLET ROCKETS (2/5)
Those are some attractive sides, and the action side should frequently help it fix itself to the 2 side. It is a bit expensive though so that is going to hurt it a lot. Jango won’t care quite as much and I think this card is closer to a 4/5 if he is in your list. As a side but related note in Jango’s case, why are Gauntlet Rockets considered equipment, but Wrist Rockets are weapons?