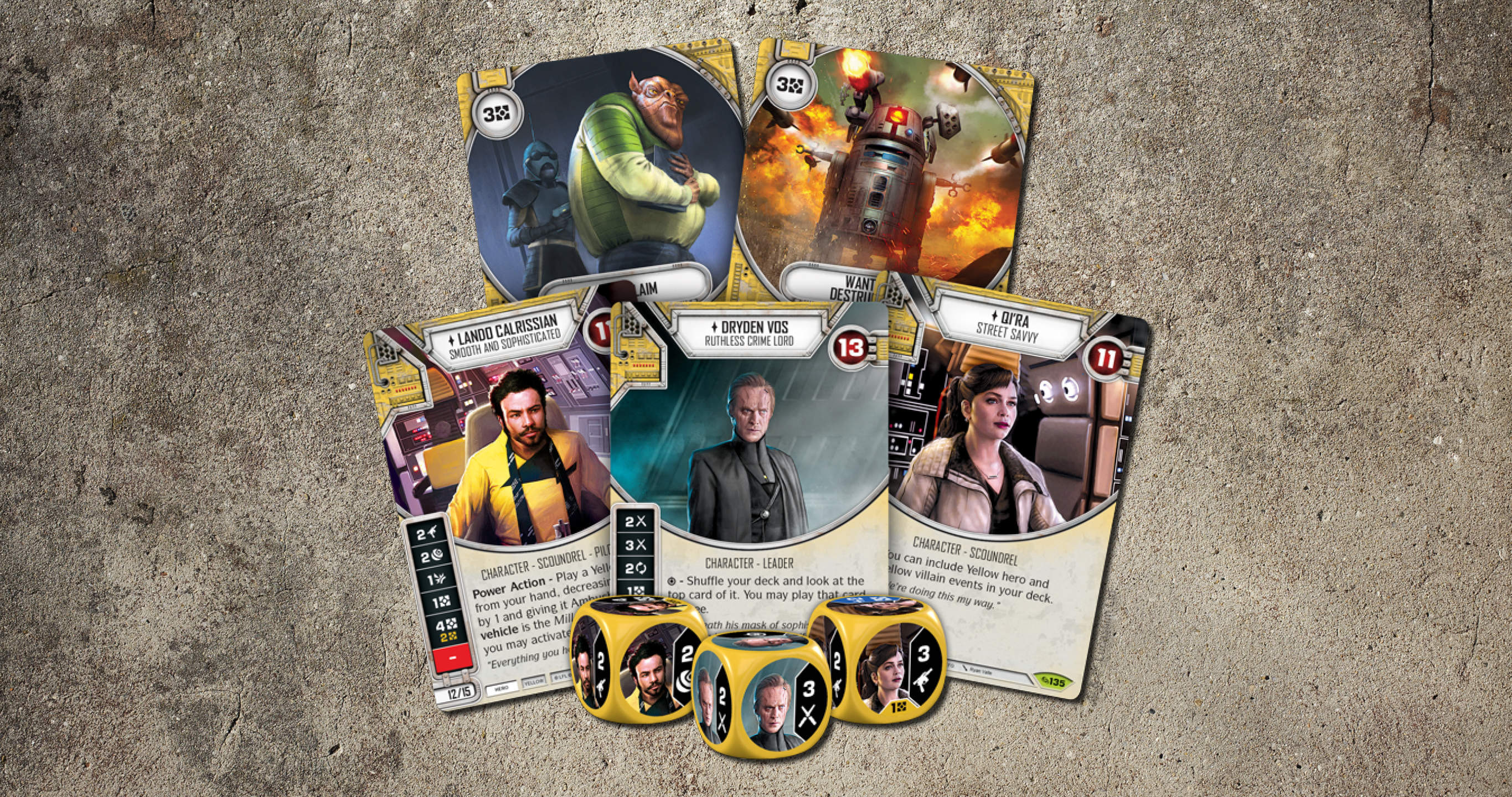 1. SPOILERS - FINALLY!Star Wars Destiny players everywhere have been screaming for spoilers for the 6th expansion: Across the Galaxy for weeks now ... earlier this week we finally got it!

Check out the spoiler article from Fantasy Flight Games here!

Disappointed? Excited? Or just M'eh!??
2. THE NAME OF THE GAME IS: NEUTRAL!When Across the Galaxy was first spoiled the biggest tease of them all was the promise of negative plots. Of course, FFG has previously been making promises of big impact cards or mechanics that would change the game, and not exactly been delivering what was promised, but at a glance it does look like the hype could be real.

Neutral characters have so far been scarcely played and not because they are neutral, but because they have thus far been horrible value. Neither the Jawa Scavenger, Lobot or Ketsu Onyo have seen ANY play outside of janky casual decks, and unless something radical is going to happen with the next wave(s) of releases they'll die in the darkness of your binder.

And even Anakin Skywalker and Hondo, who have seen some play are not really good value either. They've been utilised in specific decks, but didn't really seem to fit most places. All of this could be about to change! 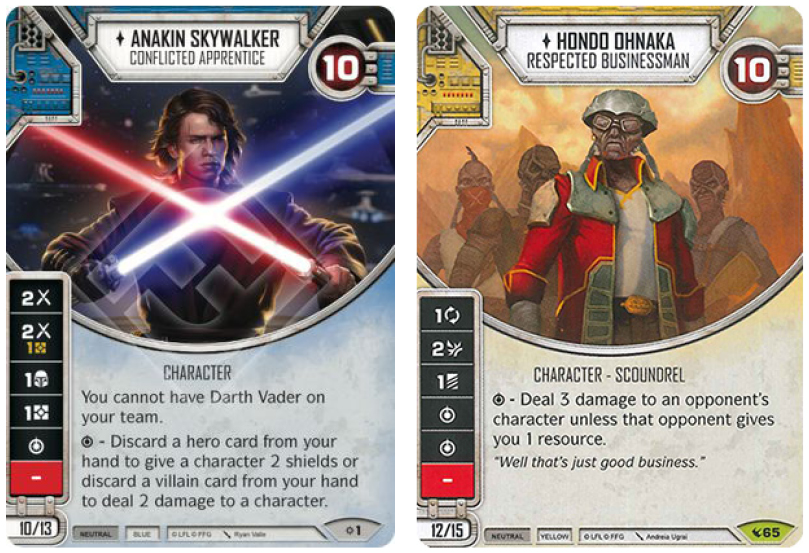 NO ALLEGIANCE, apart from displaying some pretty dope artwork, is not only the first negative plot (that is the first plot to allow you to field a character team exceeding the 30 points character limit), but also the first real aid to assist Neutral only character teams, which previously has been looking pretty lame ... well, honestly, it still looks pretty lame, but I think it would be fair to assume that this set is going to see the release of more neutral characters (apart from Han Solo and QI'RA) to give Destiny more thematic flavour and add a bit of bite to neutral character teams.

It definitely adds more choices to character teams that now includes some crazily tanky 3wide line-ups such as rainbow Anakin/Lobot/Han Solo (33hp) or the straightforward Han Solo/Qi'Ra (24hp), which also looks alluring despite the fact that it's mono-yellow. You gotta hope though that other neutral characters are going to show up that will make the No Allegiance viable outside of a mono-coloured environment.

Qi'Ra is an interesting build with her big damage sides, although it is a bummer that the 3 Ranged damage is a payside, but the +2 Resource side definitely peaks my interest. Using Han Solo together with Qi'Ra opens up for some cool plays where Han's Special not only deals damage, but also helps finance the big Ranged damage side on Qi'Ra (revealing a hero card).

Whether or not it will be possible to make neutral-only character teams, apart from the characters at your disposal, is going to be the quality of the neutral-card pool. Not having access to either villain or hero cards is inevitably going to reduce not just your options, but comparatively to other decks, also the strength of your deck. Qi'Ra solves part of this problem by allowing you access to the entire yellow card pool of events, which obviously also works nicely with Han's Special ability. Having access to both Easy Pickings and He Doesn't Like You is just nice!

3. OTHER CHARACTERS:The other 3 characters spoiled in the set all have their own distinct feel to them ...

LANDO CALRISSIAN has a super funky die, with the 4 Resource side emulating that of the Hound's Tooth, and while it looks pretty powerful it also feels somewhat limiting. Maybe Lando would have been better off had he retained the 3 Resource side from the previous build. His Power Action could potentially be great if we get to see more yellow 2 cost vehicles released. Using the Power Action in conjunction with the Millenium Falcon could make for some crazy fast plays though, either using Maz Kanata or going all resource crazy with Yoda and Rose, although both would be 3 dice starts and probably not where you want to be with a hero vehicle deck.

L3-37 is an odd character. The dice sides are fine, but it's the ability that makes it stand out. Keeping the die on the table even after L3-37 is defeated is pretty awesome. And suddenly the 2 Focus side looks pretty solid!

DRYDEN VOS is the upgraded Bo-Katan, and packs a punch. Players are already drooling over the prospect of being able to play a Darksaber or a Pirate Speeder Tank for free in round 1. At 13 health he looks pretty menacing, and if you can densify your deck with upgrades or supports, so as to reliably draw them with his Special he could be pretty mean. Biggest hurdle is the fact that you will have difficulty scraping together a 4 dice start. There might be a funky Dryden/BattleDroid/Calling in Favors deck floating around.
4. SUPPORTS: 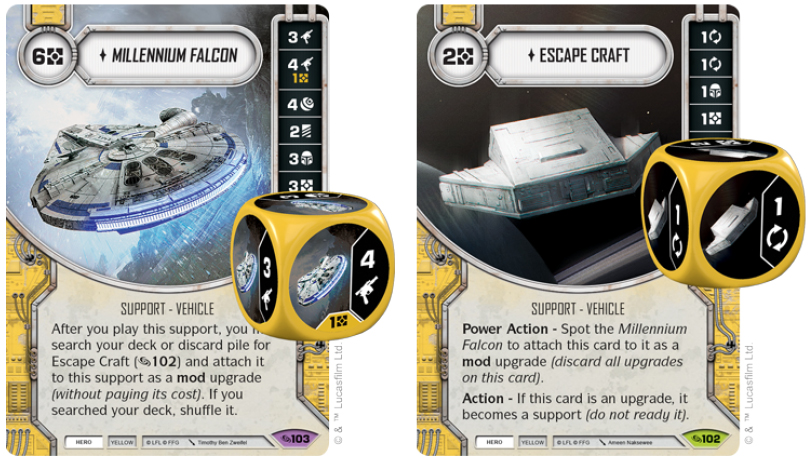 We already had these supports spoiled at NOVA 2018 and the synergy between the two is obvious. The new Millenium Falcon is not really impressive, even with some phantasmagoric die sides. Finding those 6 resources is prohibitive for the card unless a hero version of Delve finds its way into the set.
5. EVENTS: 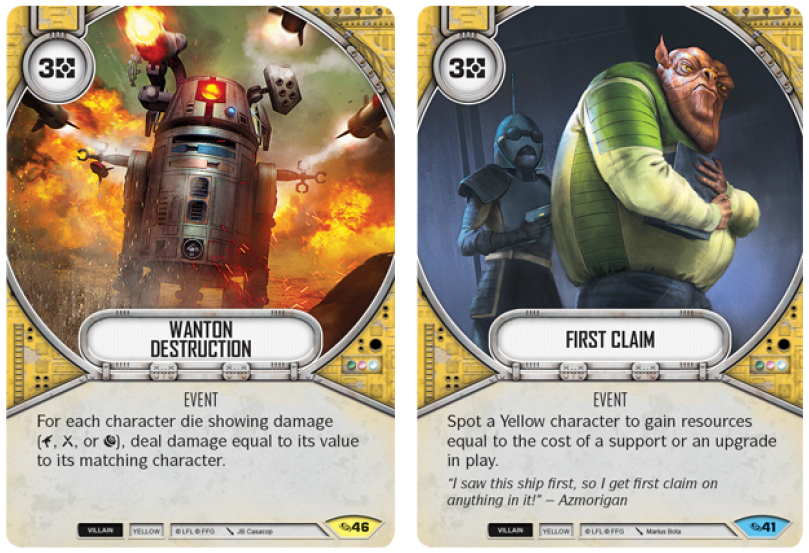 WANTON DESTRUCTION is pretty massive and the name is aptly chosen. It basically deals damage to every character (including your own) equal to its character dice showing damage. It's also pretty expensive, and probably won't find its way into a lot of decks. It also doesn't remove any dice. It goes into the same category as Reversal and Bravado, and they don't see a lot of play.

FIRST CLAIM makes it possible to net 3 resources, unless more expensive supports are released. I suspect this will often be a dead card in your hand unless you get an insane resource generation going early on. It is designed in line with Closing the Deal, although with less of a negative impact.

That's it for our quick rundown of the latest spoilers, which have been looooooong overdue and I do expect the next month to be brimming with new cards!