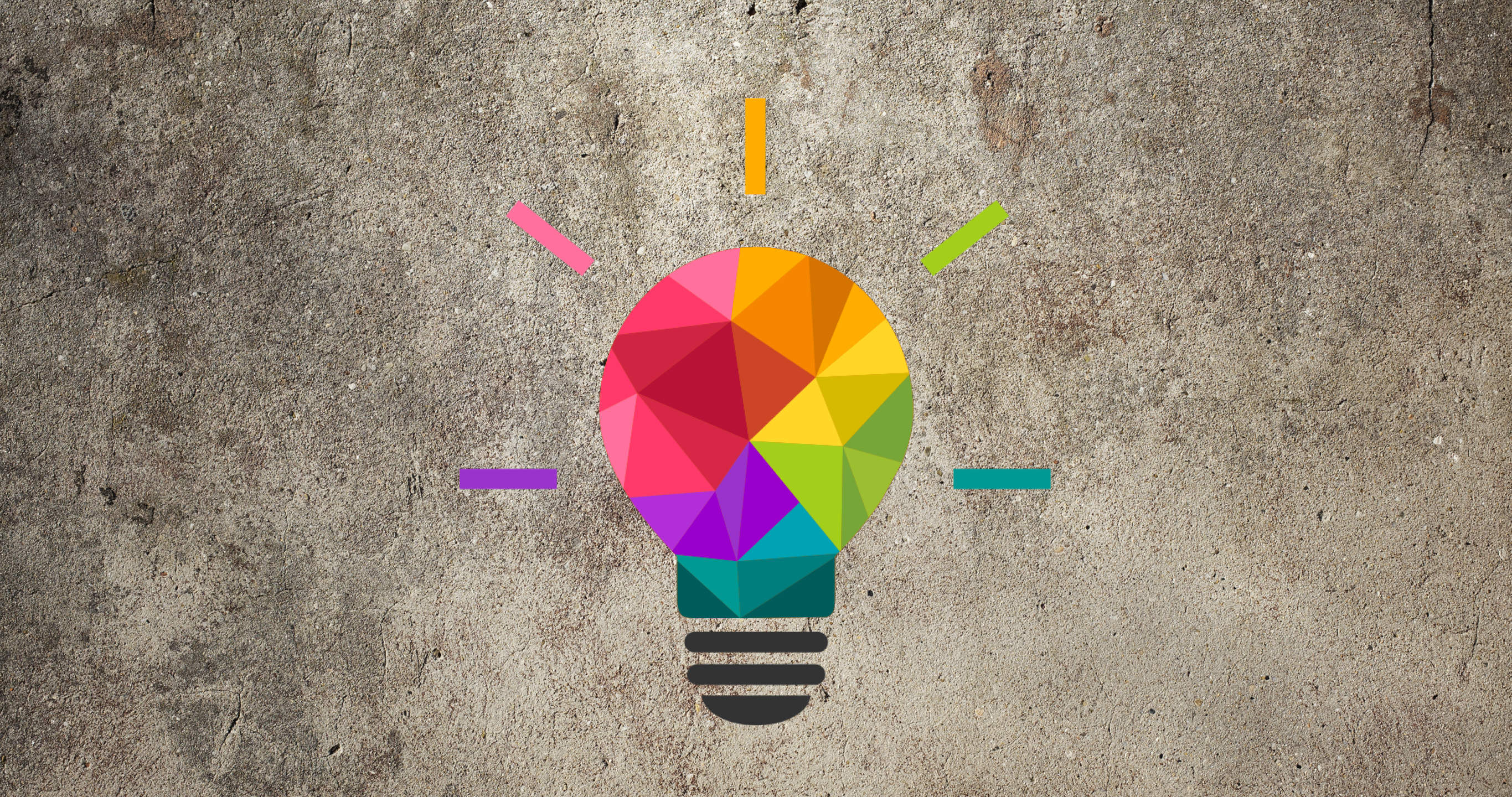 THE POWER OF NO MERCY
(and the forgotten cards [Awakenings edition])
In this article I'll be discussing the consistency and merit of some of the "forgotten cards" of Star Wars Destiny. Some of these cards used to see at least some play in past metas, due to a smaller card pool and availability, but rarely see any play today. They are however, in my mind, still GAME CHANGERS!

I define game changers as cards that, if used at the right moment, will win you the game or at least heavily facilitate your win condition.
NO MERCY:This card has been one of my favourites since the release of Awakenings. It can be absolutely devastating against your opponents, and most of the time you will want to see it in your opening hand, possibly destroying a character round 1 (If you are greedy). In my Worlds 2018 run (7-2 record: 23rd place) using No Mercy in Kylo2/Talzin, I was able to kill Yoda round 1 in my first game, and in my second match I hit Sabine Wren for 11 damage in the first round, eventually winning the game in round 2.

Most of the time your opponent won't even know what hit them! More often than not, you'll hit for X+4 damage for just 2 resources (in monoblue decks). It essentially means that if you hit for 4 damage with your first character, any character with 10 health (or less) is in the danger zone! Hitting another 4 damage with the consistency of Mother Talzin is not that hard (Mother Talzin might actually just be the best No Mercy character in the game). Getting that early kill is obviously going to be massive swing in your favor!

This is the list that I brought to WORLDS 2018 (and managed to take to 23rd place. 4-2 day1 and 3-0 day2). The deck is probably one of the most aggressive and consistent decks in the current meta. 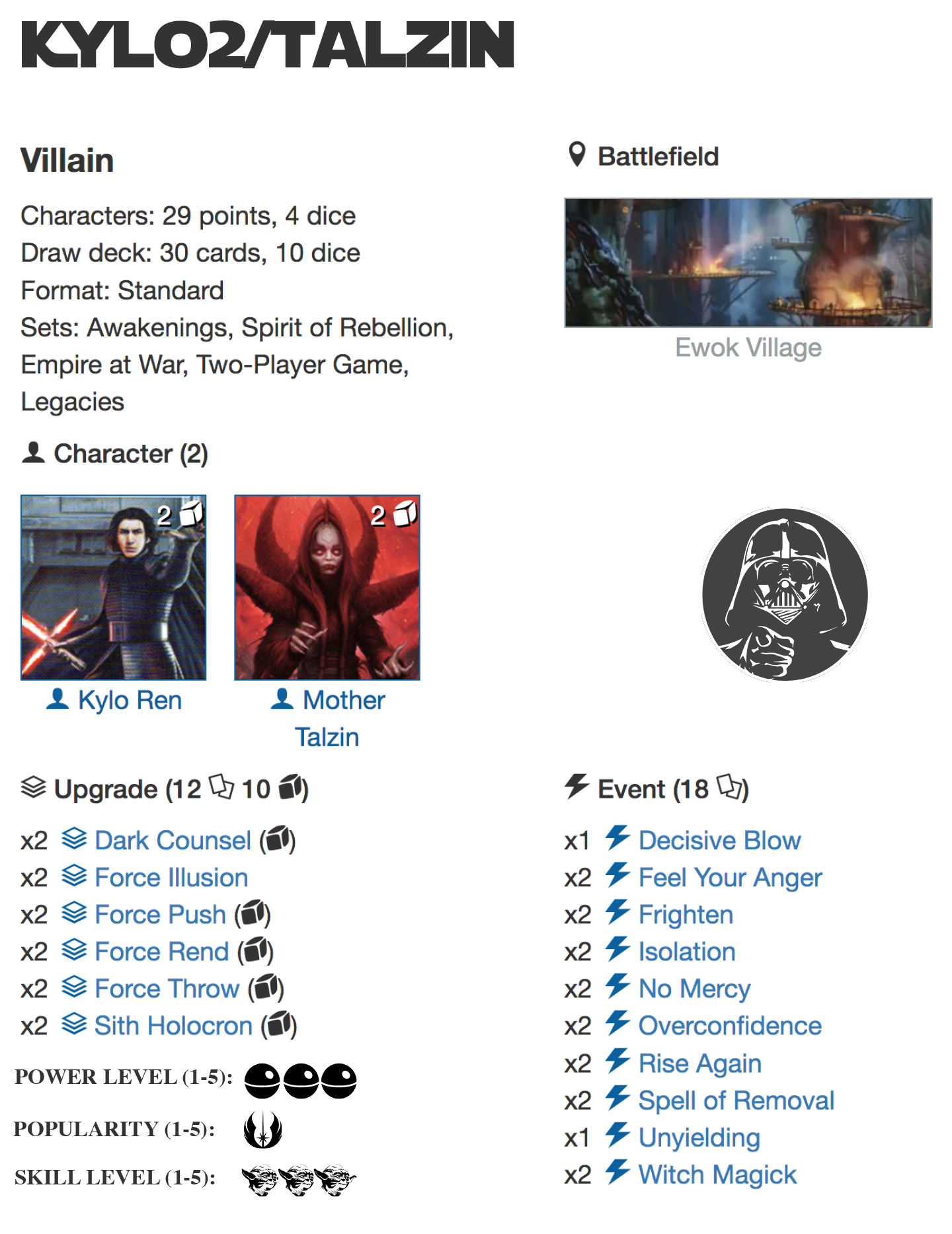 If you are playing against a blue monocolor villain deck, do be on the lookout for those lethal No Mercy plays.
FAIR TRADE:

This is one of the cards that I really believe can be powerful in a vehicle heavy meta or against decks that generate a lot of resources in order to ramp (e.g. Thrawn/Talzin). I used this card in a bid to revitalise the old Rey/Han Solo deck at EUROS 2018.

The card is tricky to get to work consistently, but it is amazing when you get to play a Vibroknife (triggering 2 more actions) on Rey (Awakenings version), activate Han-Solo, hit a Resource side, then use Fair Trade and steal away the the 2-3 resources your opponent has accumulated, and you now have even more resources for upgrading your characters.

Fair Trade can’t be compared to any other card in the current card pool , and it's a card that is so effective at stealing resources from your opponent. You will of course need to hit the Resource side, but exchanging 1 resource for 2-3-4-5 of your opponent's is such a massive swing that on many occasions it means winning the game.

Obviously this card is the nemesis of resource reliant decks and probably soon with the new Anakin Skywalker (Way of the Force) and his 50% chance of hitting a Resource side, we are going to find a lot of nasty opportunities to destroy mid-range decks. I bet that we will see this card hitting some more gaming tables very soon.

This is an example of a fun deck that utilizes this "forgotten" card, Fair Trade, to great effect, and it offers you another chance of playing Han/Rey again (Zack Bunn - I hope you are reading this). 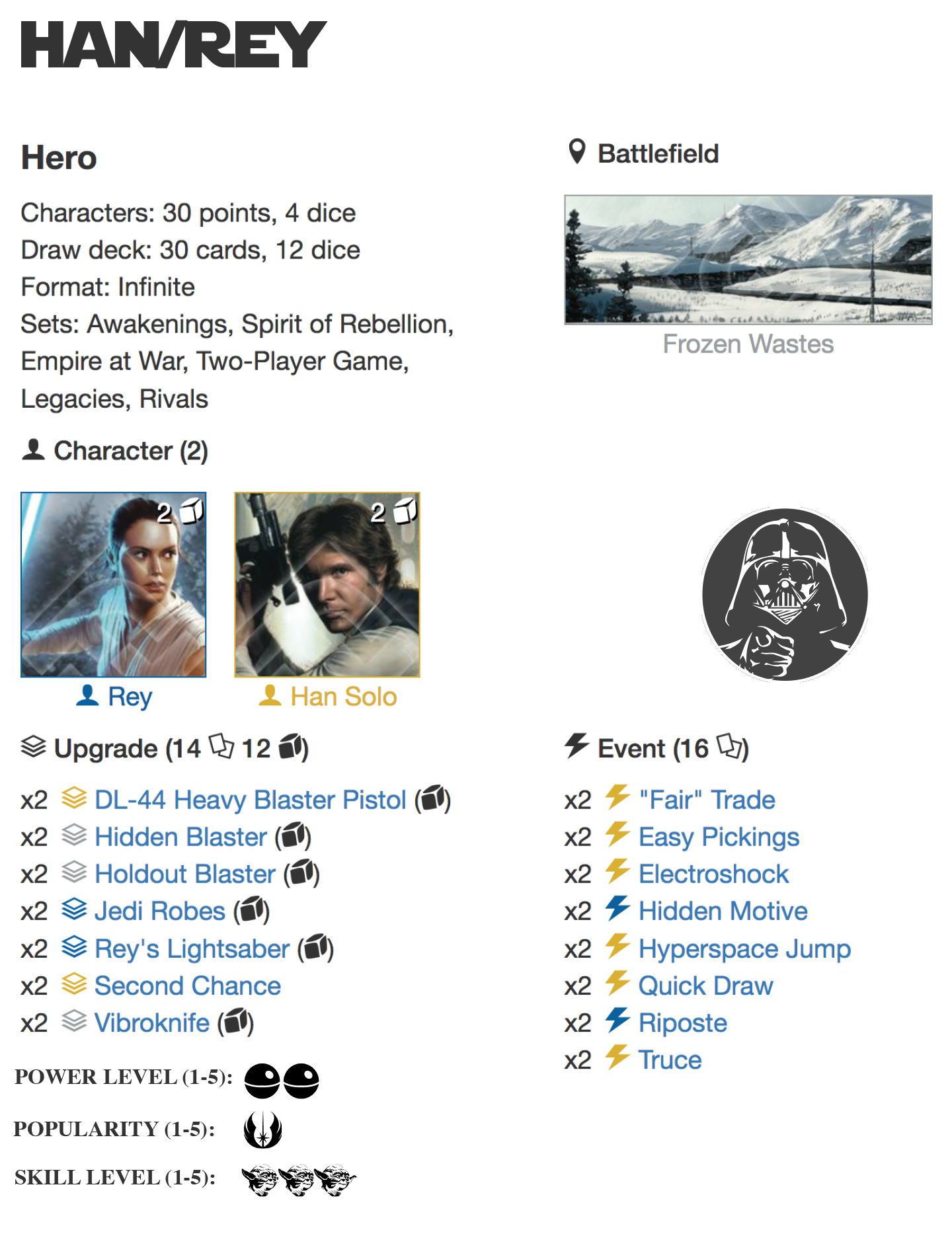 ANTICIPATE & DARING ESCAPE:These are both cards that haven't been getting much love. Anticipate in particular have seen practically no game time since the early days of the game, and the vast majority of Destiny players have probably never used either of the two. But with Yoda, and all the new characters that generate tons of resources, both slot in well as much more aggressive alternatives to Mind Trick. It's just an amazing feeling to see your opponent rolling a bunch of sub-optimal sides and then forcing him to resolve or remove all of it.

While Mind Trick is a card that serves to divide your opponent's dice and is good against decks that accumulate dice in the pool, it is sometimes ineffective when pitted against an experienced player who resolves his dice before rolling too many into the pool. Anticipate on the other hand gives you the possibility of taking advantage of your opponent's bad rolls, and make those rolls destroy his entire turn. Having a chance to destroy his weak dice before he is able to fix them with re-rolls can be absolutely massive.

For the most part, Daring Escape works the same way as Anticipate. Not only do you punish the worst rolls (blanks), you might also have the fortune of turning some of the good rolls into mediocre ones. The combination of soft mitigation AND removal is what makes this card shine.

The best place for these cards are in "slow" decks or decks that are good at generating resources. Here they should slot in nicely, and are good ways to shift the balance of the game in your favor.

So, I want you to remember all of those forgotten cards in your collection, maybe revisit them and see if some of them can be used as the meta starts changing, and maybe even change Your Destiny in your local metas!

BTW. Remember that you can come and hang out with me on the YOUR Destiny Podcast Discord Channel by becoming a Patreon!