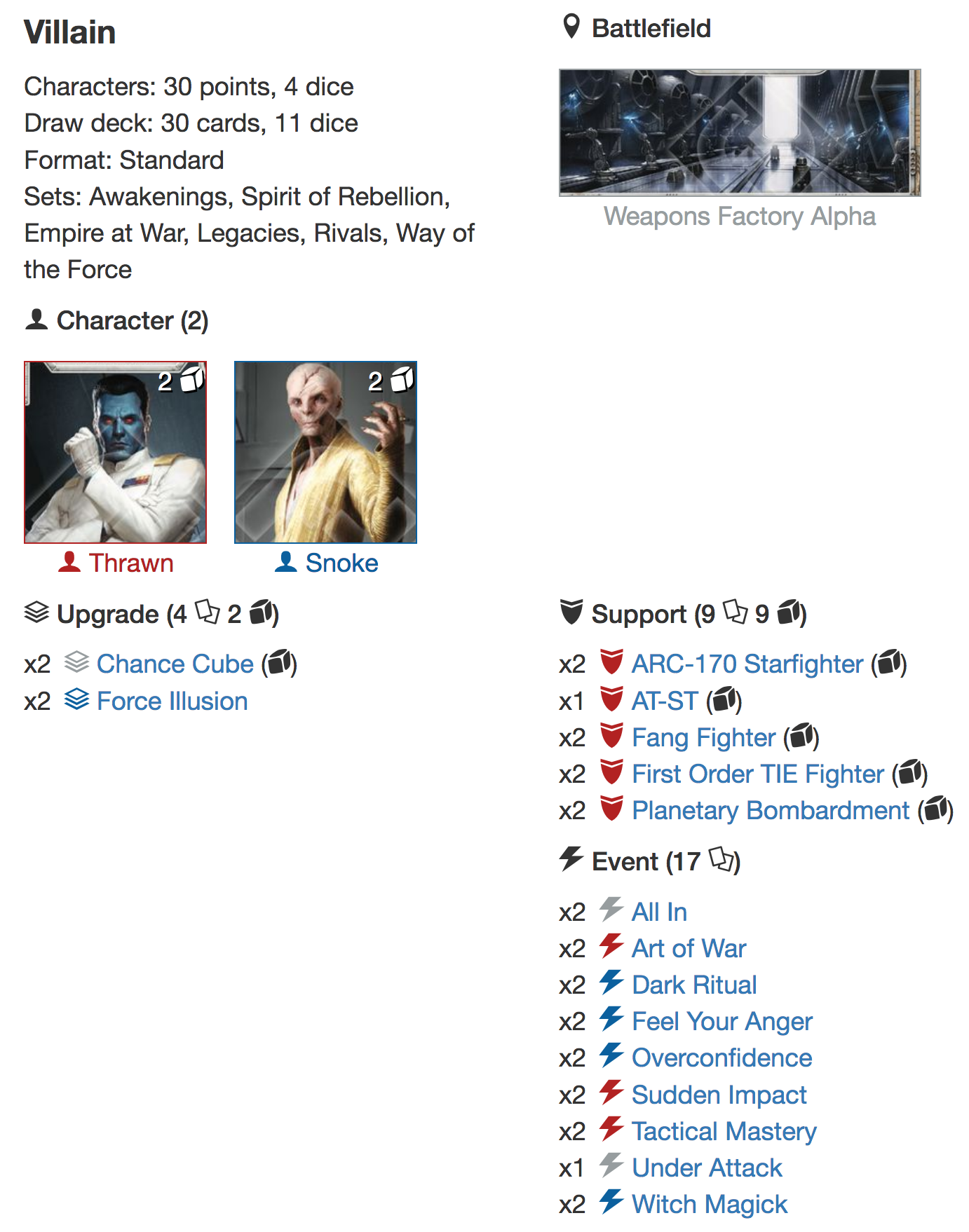 1. CREDITS:
In the Your Destiny article about Grandmother (eThrawn/eTalzin) by Tobias Winter, he briefly mentions a vehicle version of the deck that reached top16 at the European championship 2018. I already played the upgrade version of Grandmother with the addition of two Fang Fighters in two online Leagues (and managed to reach 1 final) and at the Stuttgart Galactic Qualifier (with a final score of 4-2), so the deck immediately intrigued me. After Snoke was spoiled as the perfect fit for Thrawn, I just had to try it out. 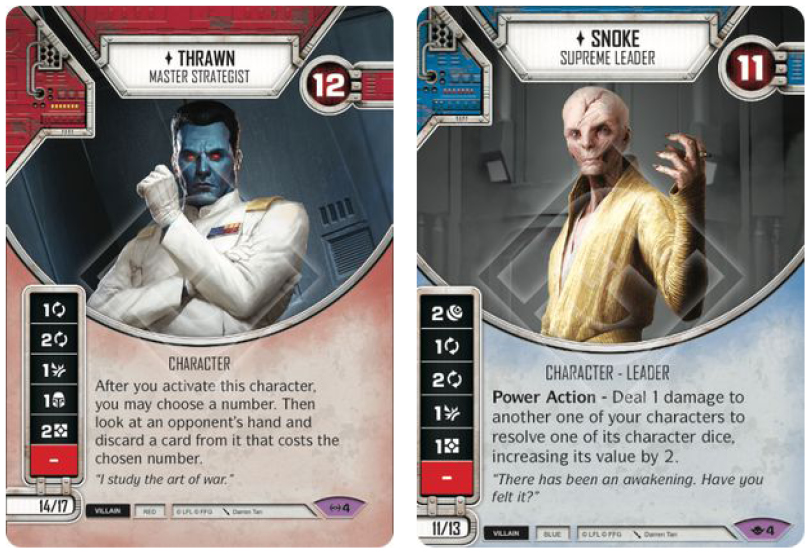 So, on our way back from the Galactic Qualifier in Stuttgart, David Levy (the winner of the GQ) and I threw together a first version of Thrawn/Snoke. We named it: SUPREME MASTERS.
2. GENERAL COMMENTS:If you want Yoda's resource generation to look like that of the wrinkled old man he is and summon an armada of imperial firepower, while you know every option your opponent has in his playbook, then this is the deck for you!

Like the Grandmother deck, this deck requires mental stamina, since you have to map out both your own and your opponent's deck. Before you continue, you should read Tobias Winter's analysis of how to get the most out of Thrawn.

In short, the strategy of the deck is to produce tons of resources, play around your opponent's removal, survive (hopefully) and summon some big ass vehicles to crush them in round 3 or 4. Because of the massive amount of resources you can generate, you also have the tools at your disposal to surprise your opponent with some speedy plays.
3. CHARACTERS:Both your characters are super efficient and single minded in purpose. Generate money and use their vast health pool (12+11hp) to stay in the game.

THRAWN
Thrawn is bound to change your play style and approach to Destiny. Knowing what your opponent has in hand and disrupting it at the same time, is an enormous advantage. In most cases, you want to activate him first in order for you to map out your turn as effectively as possible. The goal is to pick out one removal card with the Thrawn trigger, and play around the remains. If your opponent is any good he will have done everything in his power to have more than one piece of mitigation in hand in this matchup. If not, he is gonna find himself on the wrong end your deck pretty soon.

NEVER GUESS WITH THRAWN BEFORE YOU HAVE SEEN YOUR DICE!! Check your opponent's Discard pile and ALWAYS call for their removal, which is usually 0 or 1. If your opponent has no resources, you usually call 0. But don't let them fool you – a good player will protect his cards by baiting you. You need to outsmart your opponent.

If you roll the 2 Resource side, resolve it immediately with Snoke's Power Action. The value of 4 resources in round one is unbelievably overwhelming. Look at Mads Utzon's article on resource management for the math behind that. But don't just produce resources blindly. There can be times, when a 3 Shield, a 3 Disrupt or a 3-4 Focus is the better choice. Try not to use Thrawn's Focus sides in the first rounds, since Snoke provides them too.

READY TO BECOME A MASTER STRATEGIST? (part 1)
Lets try the test from Tobias Grandmother article again to see, if you are ready to be a master strategist (remember the setup!). You are starting the round and have a Chance Cube, Planetary Bombardment, Art of War, Overconfidence and an All In in your hand. You roll a 2 Resource and a 1 Focus. 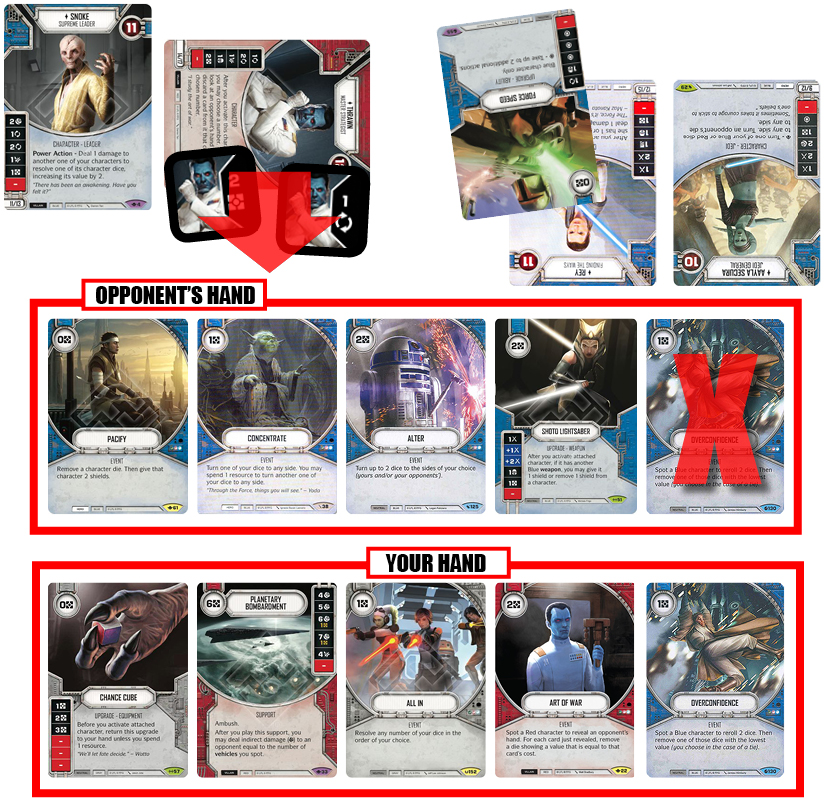 You decide to call 1 with Thrawn's ability and see your opponent's hand consisting of Overconfidence, Concentrate, Alter, Pacify and a Shoto Lightsaber. You discard the Overconfidence.

SNOKE
With the supreme leader you have a 13 point elite character with 11 health and a superb die. And as if that wasn't enough, he also boasts a game changing Power Action. Increasing another character die by 2 for just one damage (which can be blocked by shields) is tremendous. In this deck you will usually use it to get 4 resources out of one of Thrawn's dice. Later you can even decide to do a quadruple Focus or 3 shields. I even used it on a Disrupt side against a Hyperspace Jump/Second Chance deck. 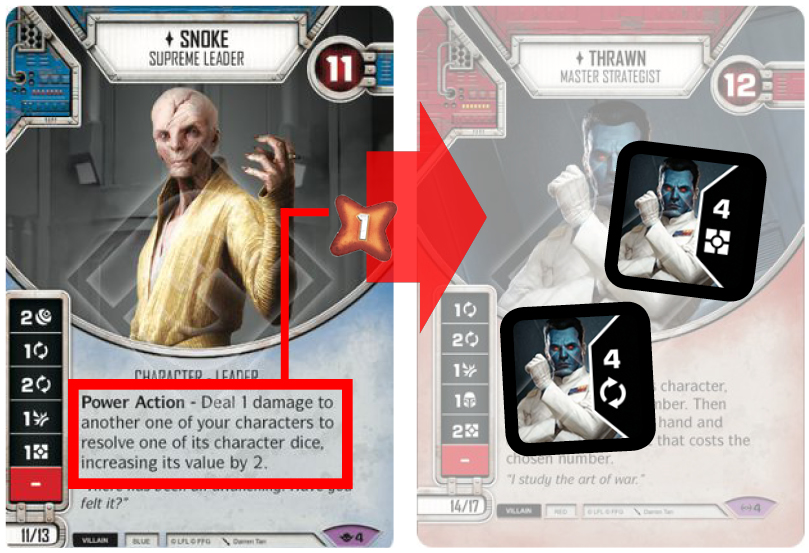 Where Thrawn gives you control of the game and an advantage in resources, Snoke just compliments all the strengths of Thrawn (well ... basically any character he is paired up with). With the two Focus sides on his die, he offers a level of consistency comparable to Mother Talzin without suffering from having the whole deck built around that ability (the split between even and odd costed cards). The Resource and the Disrupt sides I only used in very rare cases – and then it's mostly to play around an Easy Pickings or to stop a specific card from being played by disrupting the resources. Normally these two are considered blanks and should be fixed with focuses.
4. CARDS:In the first build I focused on odd cards only, because the mindset was still very attached to the original build of Grandmother. After a few test games I realised, that it is not necessary and a Witch Magick healing 2 was still fine in the deck.

GIVE ME RESOURCES!!!!!
One of the most important cards in this deck is the chance cube. In addition to the Battlefield, Weapons Factory Alpha, this is your only ramp card. I see it as the most efficient from the ones that are available. You always want one in your starting hand! Your opponent's possibility of mitigating it will be limited if you Thrawn-call correctly. If your opponent does mitigate it, most of the time he wont't be able to remove your Thrawn dice as well. That should ensure you the essential early resources.

SURVIVAL / REMOVAL:
since the removal suite is relatively small, it is focused on cards that affect multiple dice.

Feel Your Anger and Overconfidence are obvious choices, while Art of War is the best possible removal card for this deck since you know your opponent's hand and should be able to remove at least 2 dice with it. The resource cost (2) is not a problem in this deck.

I recently added Under Attack as a flex card. If your opponent rolls just 1s and/or +1s on his roll out you can decide to eat it into the character not being focused down by your opponent (usually Snoke). 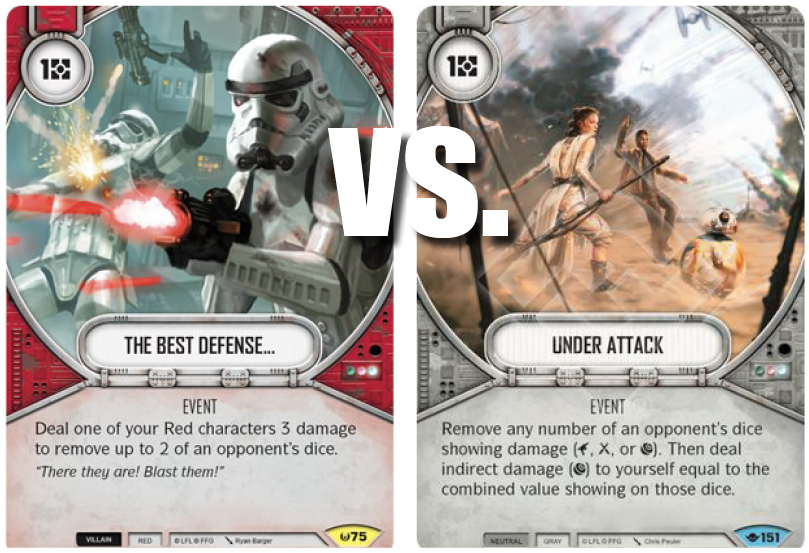 For example if Rey has a Shoto Lightsaber and an Ancient Lightsaber, rolls out and gets a 1 Melee damage, a +1 Melee damage and a 1 Melee damage, then you remove 3 dice for just 3 damage on Snoke and 1 Resource. That is in many regards a better version of The Best Defense. Depending on your meta, you can always consider adding more conditional mitigation like Dodge, Dive, Block or Defend. I prefer the „safe bets“ for my archetype of this deck.

Force Illusion, Witch Magick and Dark Ritual are the survival cards you need, in order for your vehicles to continue firing on all cylinders. While the first two are tried and tested in other decks, I found Dark Ritual to be a perfect fit in a vehicle based deck. It's similar to Rise Again, but can be used on both characters. And you do not have to fear the character dying before you can use the card. You will always get maximum value out of it. The only thing you need to consider is to resolve dice before your character dies, because it is returned to play exhausted. With these 6 cards your health pool ends up effectively being between 30-40hp!

VEHICLES:
Planetary Bombardment: Being able to play this in round 1 is HUUUUGE. If you play against a standard 2 character line-up (20-22 HP), 7 damage a round means a win in round 3. In combination with Sudden Impact it also can wreck massive havoc on 3 or 4 character decks. Unfortunately, it is not a vehicle, so no discount from your battlefield. 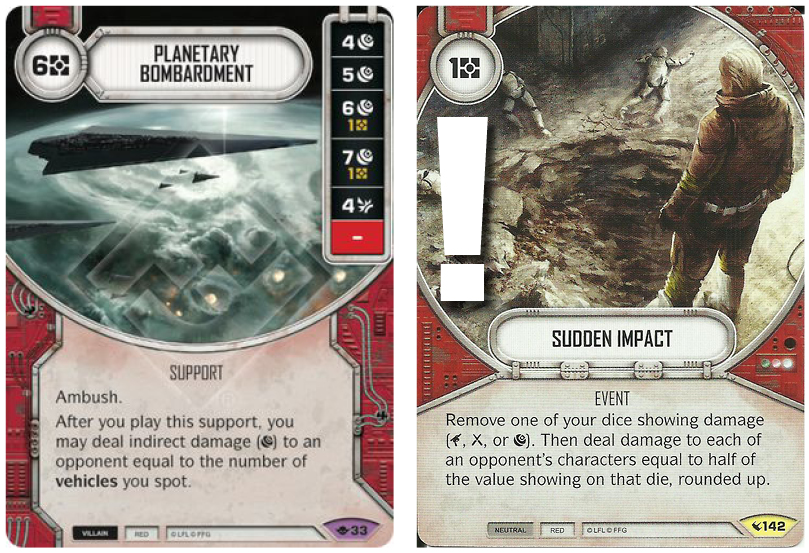 AT-ST: You need BIG damage sides, and the AT-ST offers exactly that. I prefer it over Vader's TIE Advanced, because its die is just better. I wouldn't recommend resolving the Special unless you absolutely have to or if you get to remove a 5+ support.

Fang Fighter: Has a free 3 Ranged damage side. The Discard side can be interesting as you already know the exact composition of their hand. The Ambush action can be used for some very interesting plays like Fang Fighter into Tactical Mastery into an All In can be quite devastating. 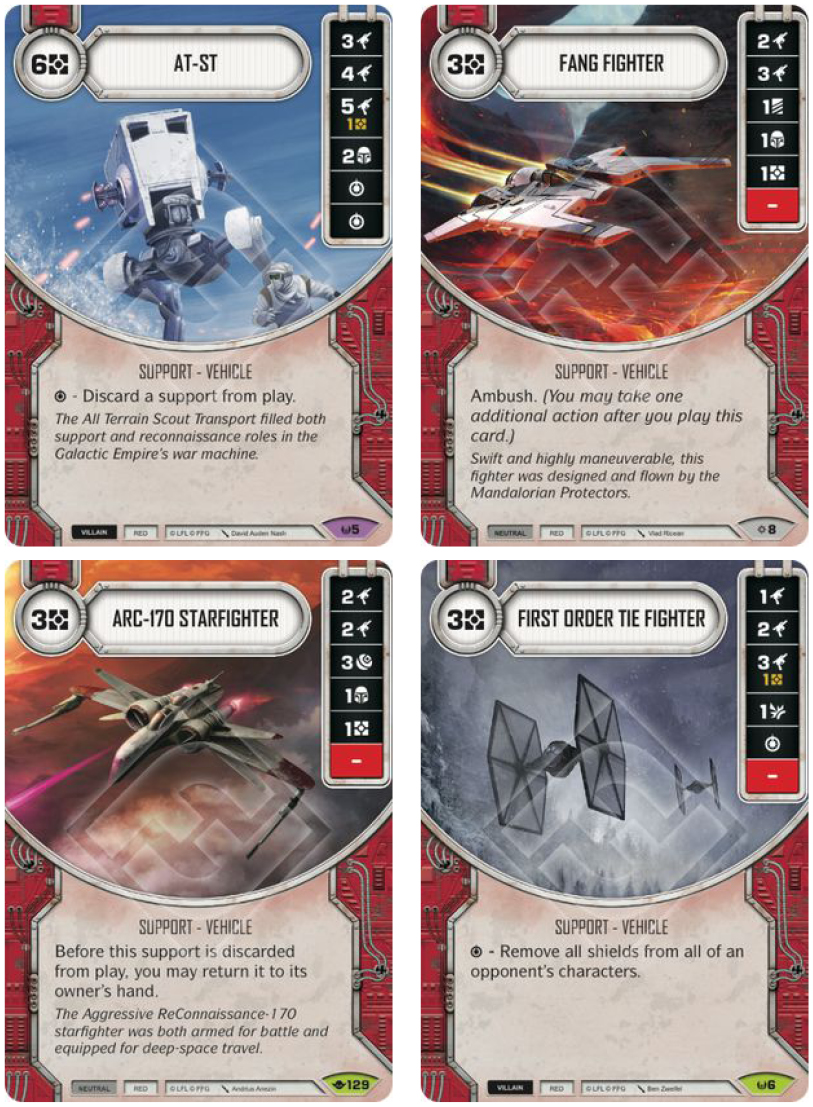 ARC-170 Starfighter: Three damage sides with good values makes this one as good as the Fang Fighter.

First Order TIE Fighter: Its another 3 cost vehicle with a 3 Ranged damage side (although one is a pay side). We are expecting more shields in the upcoming meta, so the Special could become very helpful. The TIE is however one of the first cards to cut, should you need room for something else.

The vehicles that didn't make it into the deck because they were even costed are the Hailfire Droid Tank, Droid Commandoes and the Ground Battalion. All these cards have good dice, but are misfits with Witch Magick.

TECH CARDS:
The Tactical Mastery into All In combo is a well known and effective choice in a focus heavy deck, while Sudden Impact is a meta based card to get rid of 3+ character decks. Sometimes you need the speed of All In or a well timed Tactical Mastery to play around the removal of your opponent. 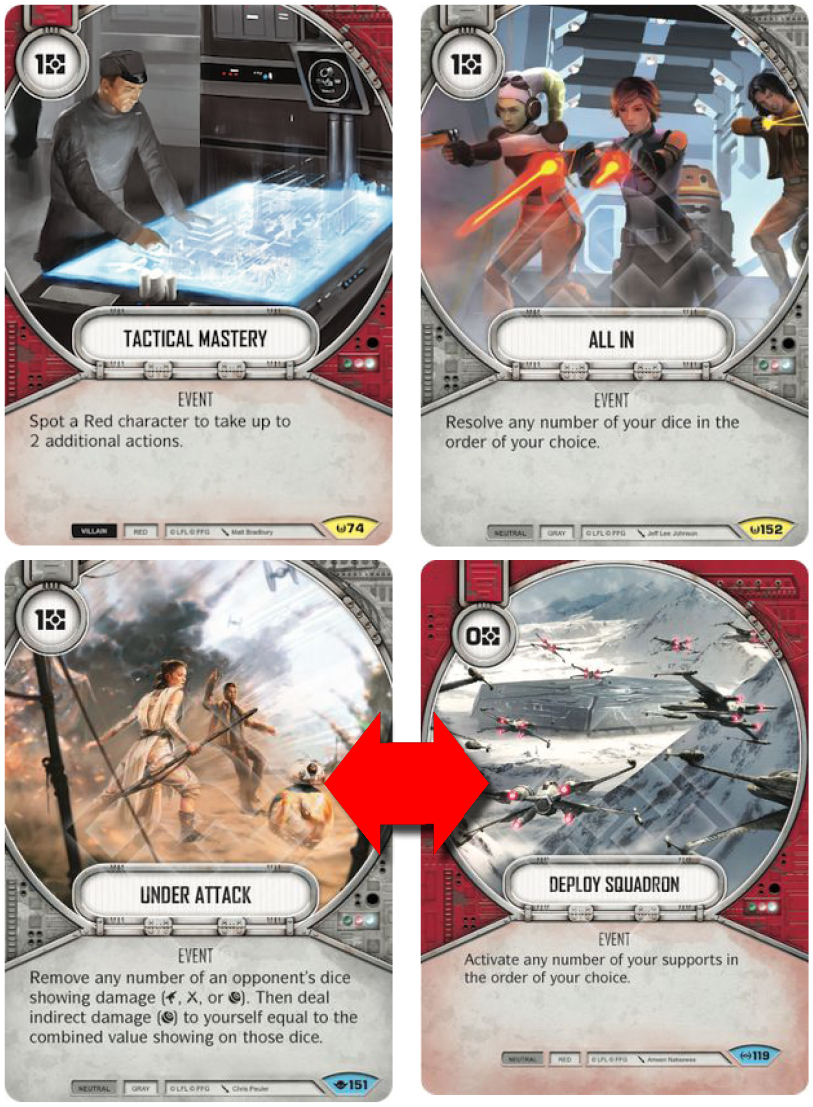 Deploy Squadron was cut for Under Attack, but you could consider reversing the switch. It does offer a potential backbreaking combo of Tactical Mastery into Deploy Squadron into All In. Hard to setup, but nothing survives it. The deck also offers you the resources to play Three Steps Ahead, but there seem to be no room for more tech cards.
MULLIGAN STRATEGY:Your starting hand should include at least one vehicle and one Chance Cube. You don't want any of the tech cards in your starting hand, except Sudden Impact vs 3 or 4 wide decks. The recommended mulligan strategy is to keep just 1 vehicle and search for that Chance Cube with the other 4 cards. (Read more about general mulligan strategies here).READY TO BECOME A MASTER STRATEGIST? (part 2)So your game progressed, your opponent put the Shoto Lightsaber on Rey, activated her and rolled a +2 Melee damage on the Shoto, a Force Speed Special, a 1 Melee damage and a 2 Melee damage. How do you proceed? Answer to be found below. 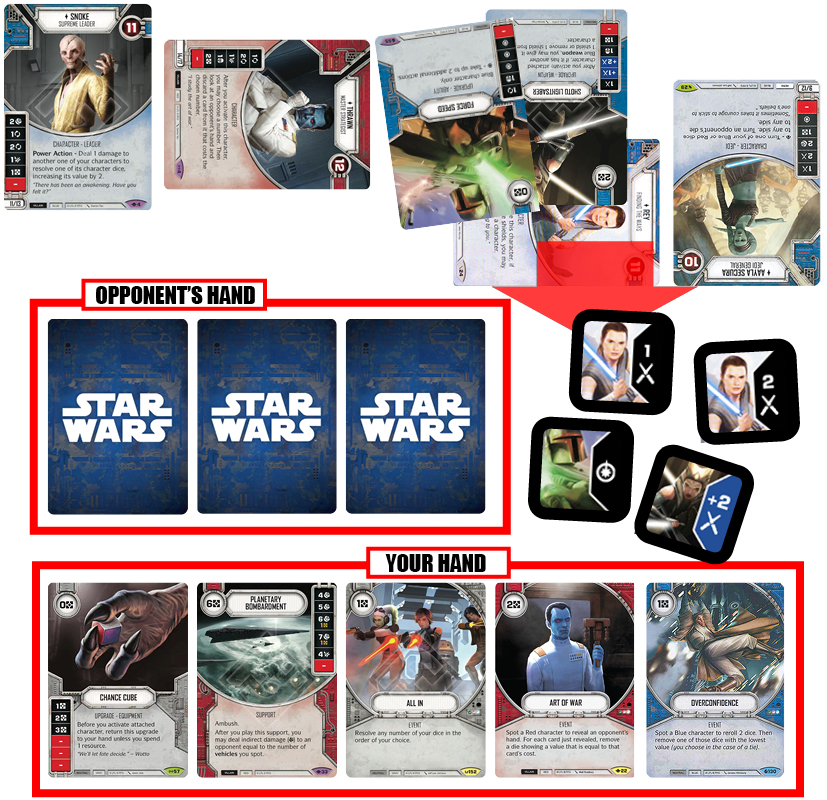 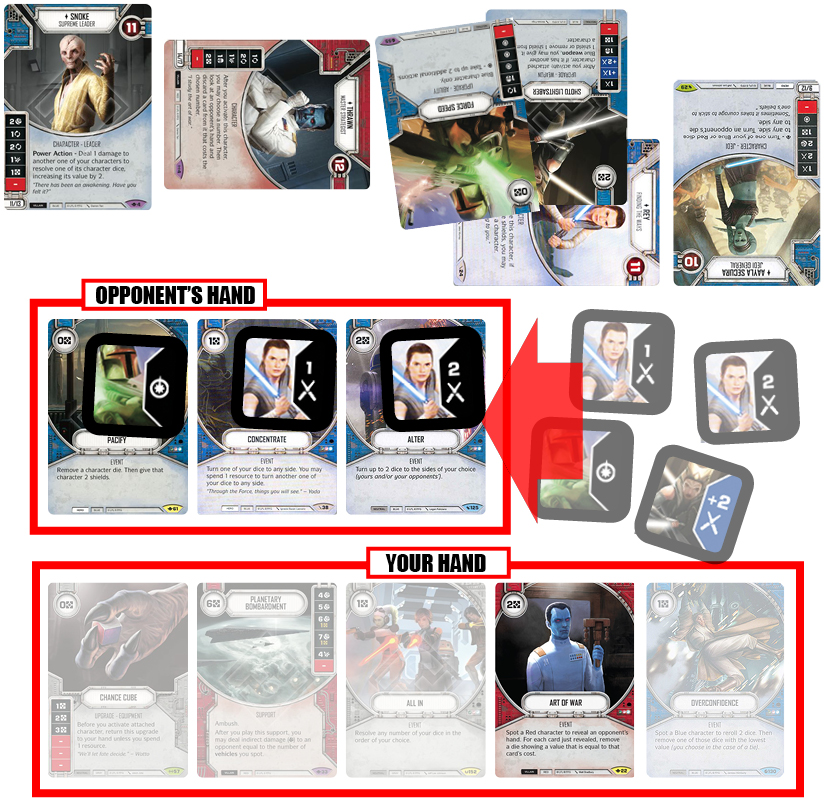 You should play Art of War to remove three dice ... but you of course knew this already because you saw you opponent's hand and remembered it!
CLOSING THOUGHTS:As this is just a first glimpse at what is possible with such a powerful character combination, it felt very strong in all the games I played, even with just 4 Indirect damage showing on your starting dice. In theory it can stand up to any deck out there.

Problems I encountered during testing were not drawing vehicles the first two rounds and having an opponent who is able to mitigate Thrawn's dice. A good strategy against this deck is to kill both characters in one swing to prevent the Supreme Masters from reviving with a Dark Ritual.