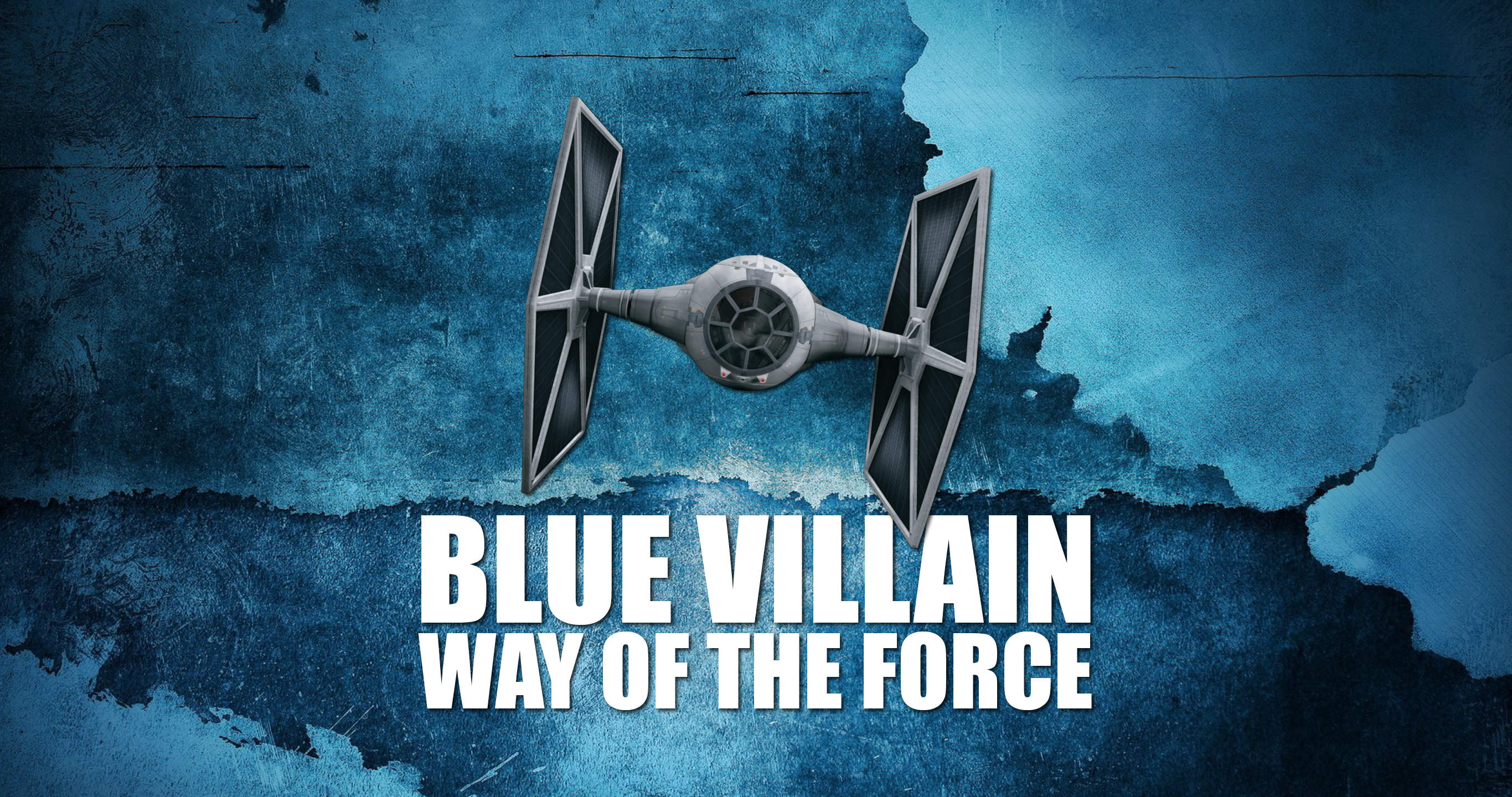 There are links to all the other parts of the set review at the end of this article!
1. BLUE VILLAIN CARDS:Blue villains have definitely been spoiled in the Way of the Force expansion set. Not only did they receive arguably the best character of the set (although old man Luke might disagree - also looking at you Cassian Andor), but they also bagged a few extremely powerful events that really opens up for what blue villains are capable of.

On top of this there are a few nifty combo cards that will piece nicely together with already existing cards in decks that might not be tier1, but could be tier2.
2. BLUE VILLAIN CHARACTERS: 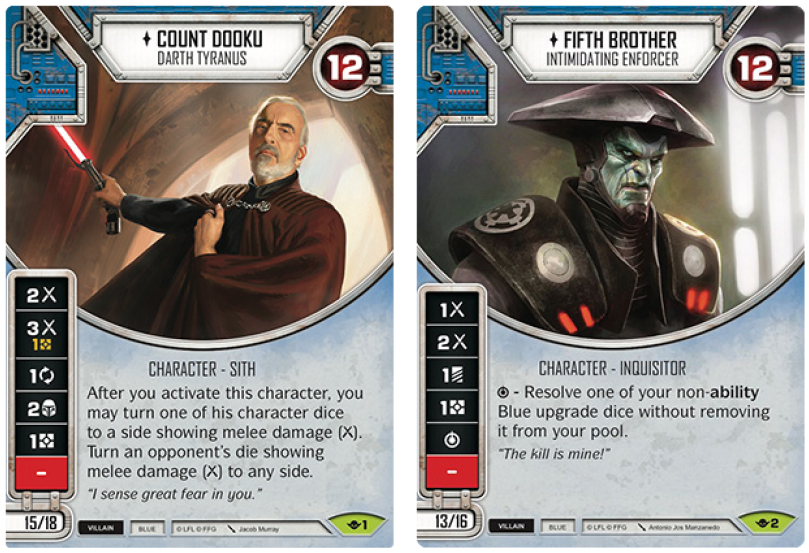 COUNT DOOKU (3/5)
We already did an extensive preview article on Count Dooku, when we originally spoiled the card, but having seen the entire set, it's fair to say that he doesn't disappoint, although he's not going to be your favorite blue aggro character. His 12hp makes him suitable for big/little decks, but partners are not easy to come by. Looking at the rest of the set though, it is obvious why they needed to bump his points cost to 15/18e. I fear that he'll only appear in the fringes of competitive play, and in those instances probably focusing on Leadership re-activations to maximize the effect of his special ability as well as possibly mitigating twice (could we be looking at a revamped "One Turn/Round Kill" deck?).

FIFTH BROTHER (3/5)
Looking solely at his die, Fifth Brother is pretty mediocre, and although he has gone through the same bodybuilding process as every other Way of the Force character to boast a healthy 12hp, he's still me'h. The only thing that saves him from a lower rating is his special that could lead to some crazy power plays and then the fact that he is bringing his Lightsaber to the party as well. There are still some good potential character combinations out there, but battling it out with a character like Kylo2 for first pick as your blue aggro main man was always going to be difficult. 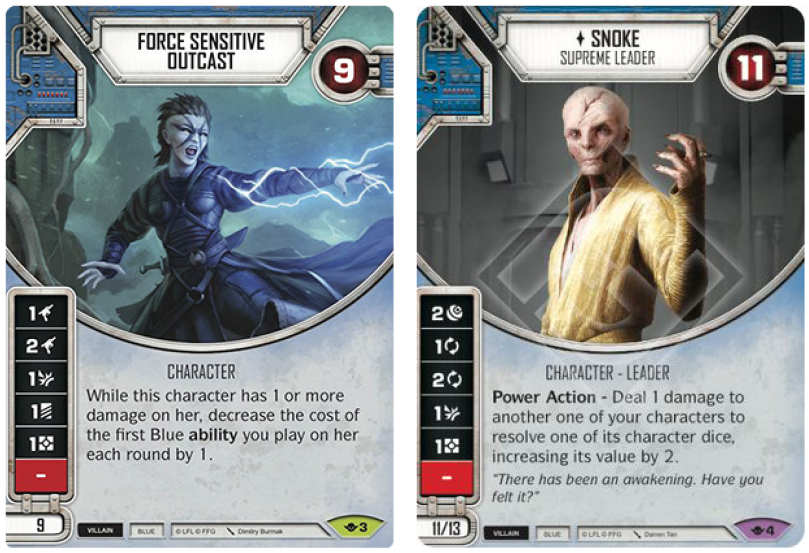 FORCE SENSITIVE OUTCAST (3/5)
I like the die of the Force Sensitive Outcast, sure I could have lived without the Disrupt side, but the two Ranged damage sides are neat, and they'll combo well with Mother Talzin or Arihnda Pryce for some nice aggro shenanigans. I'm curious as to whether it would be worth creating a deck around the ability, using Sith Holocrons as well as Force Abilities, and if dipping into red characters as well, you could bring the awesome DH-17's and do some nice Leadership based plays. Firmus Piett comes in at 9points which could make for an eTalzin/Outcast/Piett deck.

SNOKE (5/5)
So, this is probably one of the reasons why Count Dooku with his special ability simply could NOT be priced at 17e. Because O M G!! Snoke is bonkers!! Whether or not his impact on the meta is going to be as massive as we hope/fear is way too early to tell, but he's pretty damn mean. We already wrote extensively about the power plays that Snoke can facilitate in our Thrawn/Snoke and Cad Bane/Snoke Deck Analyses, but his Power Action is insanely powerful! He is the ultimate enabler and we'll see him featured extensively on top tables around tournaments. He slots perfectly into vehicle decks, aggro decks and would even make for a great support character in a mill deck. The number of characters that he pairs up with is breathtaking. We might just be looking at the best character in the set. I'm a fan!
3. BLUE VILLAIN EVENTS:

CRUSH HOPE (1/5)
Looking at all the ways Blue villains can do damage out of hand, then Crush Hope seems like a very weak card. The 2 resource cost and the play condition are also extremely prohibitive and the cap of 4 Indirect damage just makes it worse. Even if it had been direct damage I find it unlikely this card would ever find its way into a competitive deck.

DARK RITUAL (3/5)
Behold! First there was Endless Ranks and now there's Dark Ritual, the first full blooded resurrection card for unique characters. Even though they'll enter play at half health (rounded down) and exhausted, it's still incredibly powerful to be able to bring back any character. As the health of characters generally grows bigger, so does the power of this card. 5 resources as we have seen lately is not that difficult to amass. Not with Chance Cubes, Thrawn and Snoke around. Where Rise Again was limited to unique blue characters, but did come with the upside of a free upgrade, Dark Ritual is incredibly useful and can be a huge blow to your opponent's plans. I could definitely see this card being tech'ed in quite a number of decks most likely replacing Rise Again in most.

LACK OF FAITH (3/5)
When I first saw the card I was all smiles, then I realized that it was only character dice, and although the card is still fine, I think that there are better options out there. It's a great card against the godroll, but in most instances you can live with just removing one of potentially 2 character dice. It's still great though if you can afford the 2 resources. I do think that blue villains have other more powerful cards at their disposal. 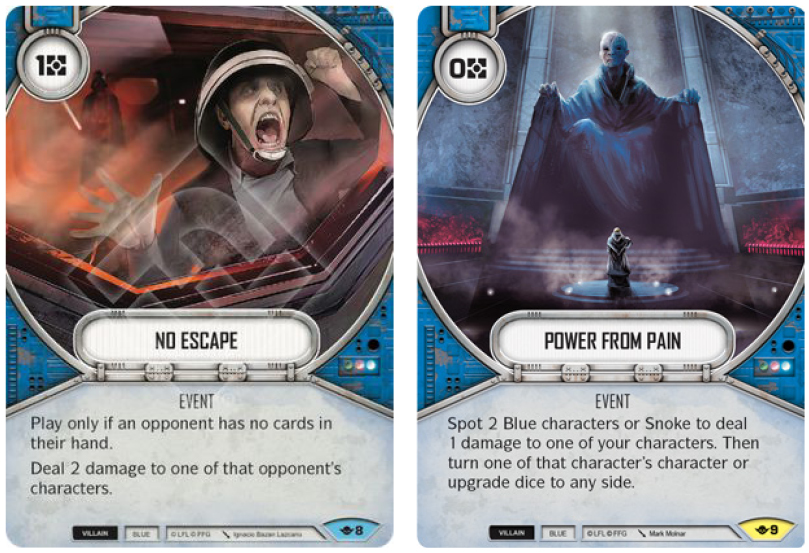 NO ESCAPE (2/5)
Unless you can facilitate the play condition of this card by being able to discard their hand, which is not really the strength of blue villain, then this card will be sitting as a dead card. Damage out of hand is great, and villains are really having their arsenal bolstered in Way of the Force, but I'm not a fan of cards where you have to rely on your opponent making specific decisions for it to trigger. You gotta appreciate the amazing artwork though!

POWER FROM PAIN (3/5)
This just has Snoke written all over it! And it goes well together with Torment. A lot of cool plays can be facilitated by Power from Pain, and if you play Snoke and/or Torment, I'd actually rate it (4/5). You should obviously be a bit careful with using Power from Pain and Snoke's Power Action too shortsighted, but I can see this card being used for great lethal maneuvers. I also think this card really rewards skill. 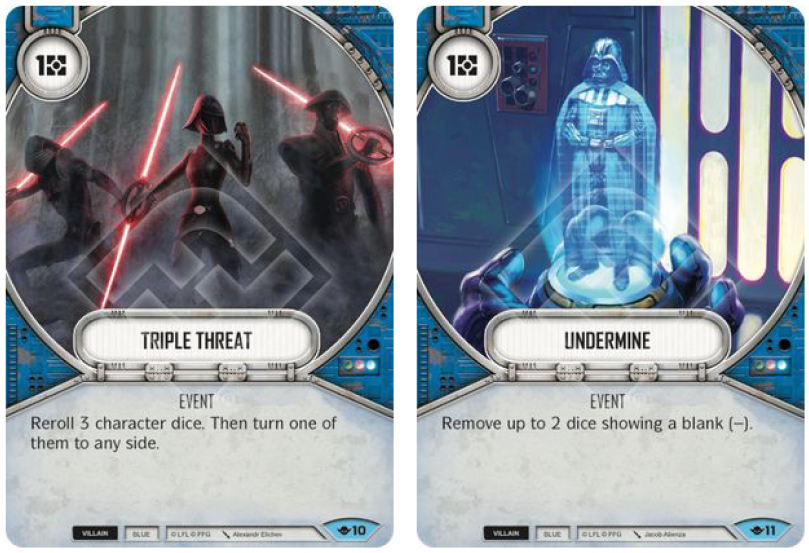 TRIPLE THREAT (4/5)
Bolstering the arsenal of any 5dice Villain deck, and the 1 resource cost will suit Mother Talzin very well. The fact that it can be used as either mitigation or improving your own dice or both is really the upside here. You re-roll, then you turn after having seen the results. This card will most likely find it's way into a lot of villain decks and will be a great alternative/replacement for the more expensive, but slightly more reliable Alter.

UNDERMINE (1/5)
Why anyone would play this card instead of Feel Your Anger is beyond me. It has a cap of 2 dice and it can only remove blanks. I guess the rating will go up a bit once rotation hits, but until then it's pretty much a dud.
4. BLUE VILLAIN SUPPORT: 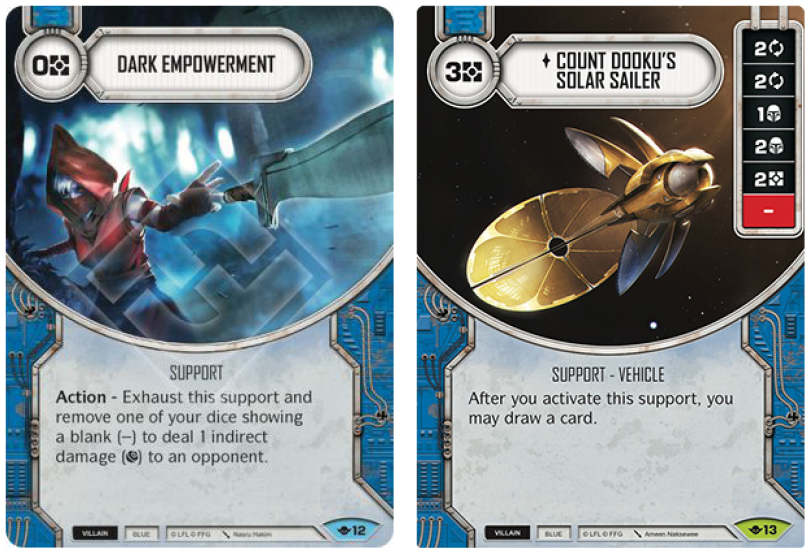 DARK EMPOWERMENT (2/5)
Good news is that you'll get something out of your blanks and the support is for free. Bad news is that it's going to cost you an action, a die (albeit a blank) and it will only net you one Indirect damage. Dark Empowerment sort of goes into this long line of Blue villain supports like Nightsister Coven, Insidious and Dark Presence, with the first two also being obsessed with blanks, that all have pretty decent effects, but are just not good enough. Sure, it can remove a Sith Holocron blank when you have no Force Abilities in your hand, but if you hadn't included Dark Empowerment in your deck, but another Force Ability instead, maybe you would not be stuck with this problem!

COUNT DOOKU'S SOLAR SAILER (2/5)
Finally environmental friendly space traveling! We already gave an in-depth analysis of this card in our spoiler article, and my evaluation of it hasn't really changed. The Solar Sailer has an amazing die, it really does, but I'm just not really sure where to put it. As it looks right now, just coming out of the official release of the set, the only truly viable support deck for villains is Thrawn/Snoke and here you are looking for supports that deal enormous amounts of damage. We are talking Planetary Bombardment size damage. And the lack of a single damage side is really the downfall of this vehicle despite its obvious upsides.
5. BLUE VILLAIN UPGRADES: 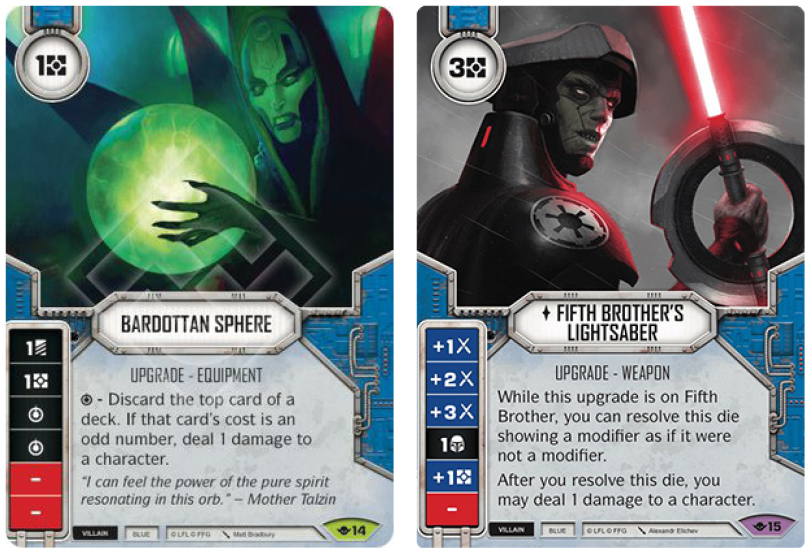 BARDOTTAN SPHERE (3/5)
It's not really a surprise that the Bardottan Sphere is a part of the whole Nightsister Coven narrative and goes hand in hand with Crystal Ball and Mother Talzin. Whether or not it will be good enough to muscle its way into Mother Talzin deck is to be seen. My gut feeling is that there's a limitation to how much filler stuff you can have in a deck with Talzin and that it'll be difficult for the Bardottan Sphere to claim a regular spot unless it replaces either the Crystal Ball or Dark Counsel, both of which are really good, but most likely the former.

FIFTH BROTHER'S LIGHTSABER (3/5)
I think most players will be looking at the Fifth Brother's Lightsaber understanding that they are looking at something which is not really as good as it pretends to be. In a one-on-one comparison, Fifth Brother's Lightsaber is nowhere near the power level of Maul's Lightsaber, even post-nerf. That's how good Maul's Lightsaber was/is. Make no mistake, on Fifth Brother himself this weapon is bonkers and probably earns a (5/5) rating (we are going over some of the plays with this particular combo in our article on Arihnda Pryce). It's disgustingly good on him, but in a vacuum blue villain/neutral are spoiled for choices and this lightsaber would not make the cut. Maybe if it had one base damage side! 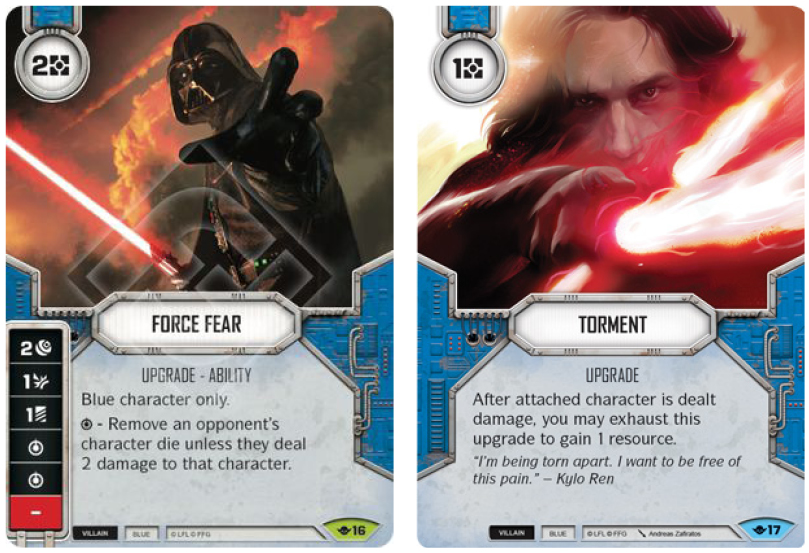 FORCE FEAR (1/5)
This is a bad Force Ability upgrade, and it annoys me since I thought we would get a new Darth Vader (I know, I'm a born optimist) when I first saw the image spoiled. Not being able to guarantee the damage is a serious downside, and you are leaving your opponent the initiative here. On top of that the die is weaker than Force Choke which doesn't see much play either.

TORMENT (4/5)
Torment is amazing. Blue villains have always been bad with their resource management, and while Enrage solved some problems, the arrival of both Snoke AND Torment is godsend. Now, even monoblue villains are odds-on for scraping together enough resources to play both upgrades, use mitigation and resolve their pay sides. Incredible! Kylo and any other high health character will absolutely love this upgrade, that could easily net you 2-3 resources over the course of a game.RED VILLAIN REVIEW
YELLOW VILLAIN REVIEWBLUE HERO REVIEW
RED HERO REVIEW
YELLOW HERO REVIEWBLUE NEUTRAL REVIEW
RED NEUTRAL REVIEW
YELLOW NEUTRAL REVIEWGREY CARDS REVIEW
Written by
CLAUS STAAL