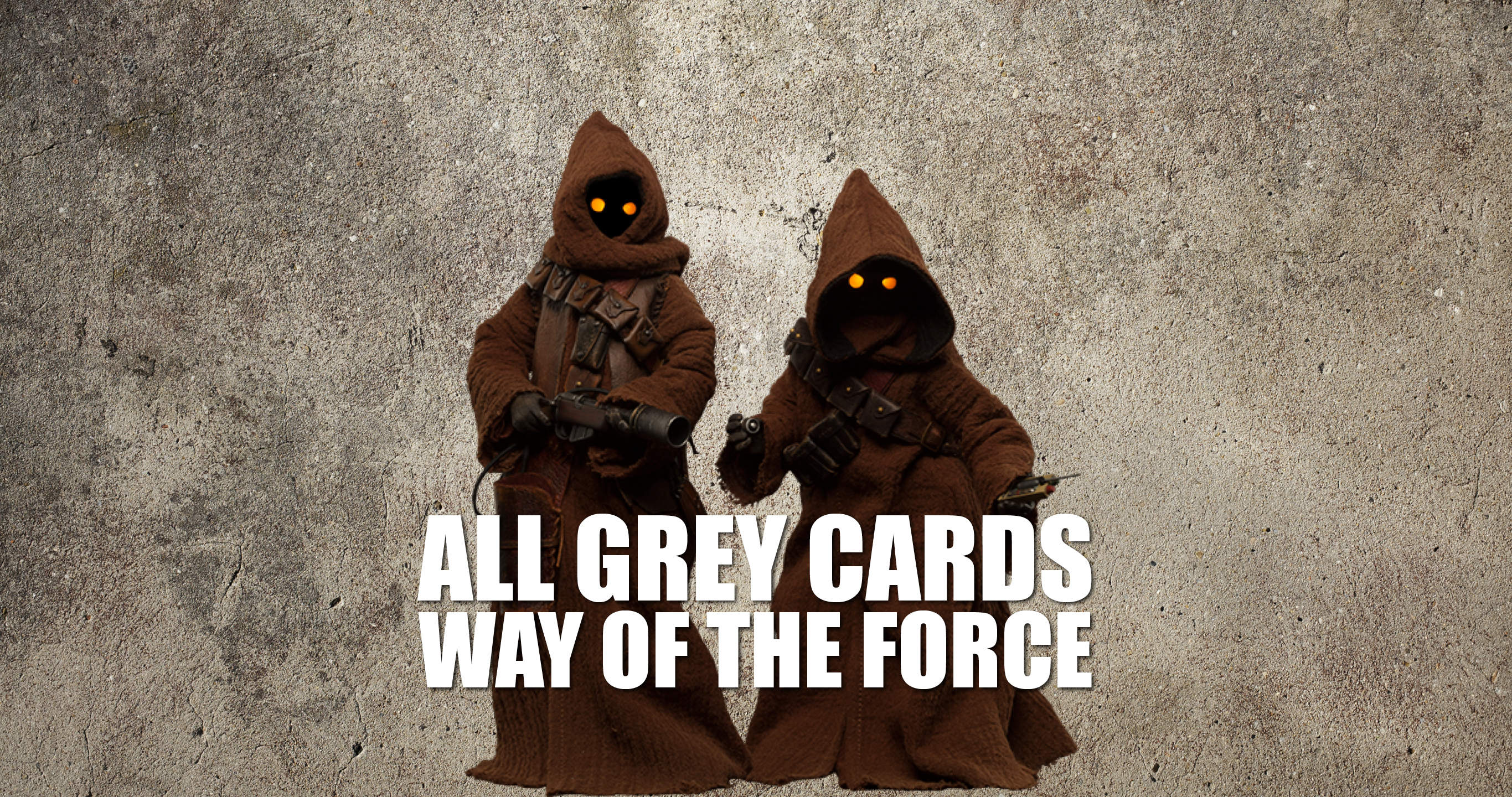 There are links to all the other parts of the set review at the end of this article!1. GREY HERO/VILLAIN CARDS:

WAY OF THE DARK (2/5)
VILLAIN
This card seems really bad. I mean, rolling a die into your pool is fine, especially if it's a powerful character die, but it just seems as if you're at place in the game where a powerful character has been defeated, you would have more urgent things to spend a resource on than a halfhearted random roll of a character die.

WAY OF THE LIGHT (3/5)
HERO
This is actually a better than removal card than it leads on to be. There are quite a lot of powerful neutral dice, like Ancient Lightsaber, Dagger of Mortis, a lot of vehicle dice, etc., and then of course all the Villain dice to boot. In particular monored hero decks are starved for good mitigation in which case Way of the Light could be an alternative.

EXTRACT (3/5)
Extract is in many ways a superior version of Fond Memories, unless of course you are avoiding to be milled out. It can be an answer to powerful Rebel plays, avoid recycling of supports like Suppressive Fire, Honor Guard, etc., and the best thing is that it's a free event. If Sabine Wren was still running wild, this card would be even greater, but she's not!

FREE FALL (2/5)
Cheap removal, although you might not hit what you want. You are in fact more likely to miss. It does have ambush, but I'm not certain that it will see a lot of play unless you are left with no other alternatives (in which case you are probably a Jawa).

MADE TO SUFFER (2/5)
This is a great mill card against vehicle decks or a Gungan Army. Mill decks usually have very favorable match ups against the slower vehicle decks, so a tech card like this just doesn't feel as the strongest route to take.

NATURE'S CHARM (3/5)
Re-rolling two dice at no cost is actually not such a bad deal, and if Kylo2 keeps running rampant in the Way of the Force meta it might be an idea to mix your regular mitigation with grey mitigation. Obviously, if you are using the Nature's Charm to only re-roll your own dice it is a bit funky since any card can do that for you!

QUELL (2/5)
Ends the cycle of powerful, but highly situational 2 cost mitigation, except that it as opposed to Dive and Defend does not have Ambush, but instead removes all dice showing Indirect damage. Could be a blowout card against vehicle decks.

UNDER ATTACK (3/5)
Under Attack can potentially be a great mitigation card that can remove several dice and distribute damage evenly amongst all you characters or divert damage from a focused down character to another character. It's particularly useful before your opponent fixes his bad rolls, or gets to resolve them i.e. two Kylo2 dice showing 1 Melee and 1 Melee and an Ancient Lightsaber showing +3 Melee, removing both base Melee sides and distributing it amongst characters.
3. GREY NEUTRAL SUPPORT/UPGRADE:

LOTHO MINOR JUNKERS (3/5)
Lotho Minor Junkers is an interesting way of getting rewarded for discarding cards. If you have a way of reliably hitting the Special, it could be worth including. It could potentially pay for itself round 1 and start tallying up resources in round 2.

PODRACER (2/5)
The podracer has a horrible die, but it is also just one resource. It could be a way for Mother Talzin decks to add more dice in the pool either for Indirect damage or a Free for All play. It is even odd costed so should slot in nicely with Witch Magick and her ability.

MACROBINOCULARS (2/5)
Interesting die, although the Special is essentially just a Shield with an added bonus. I generally have no interest in looking at an opponent's hand unless I can disrupt it, i.e. Friends in Low Places, Scruffy Looking Nerfherder, Thrawn, etc.
4. GREY NEUTRAL PLOT: 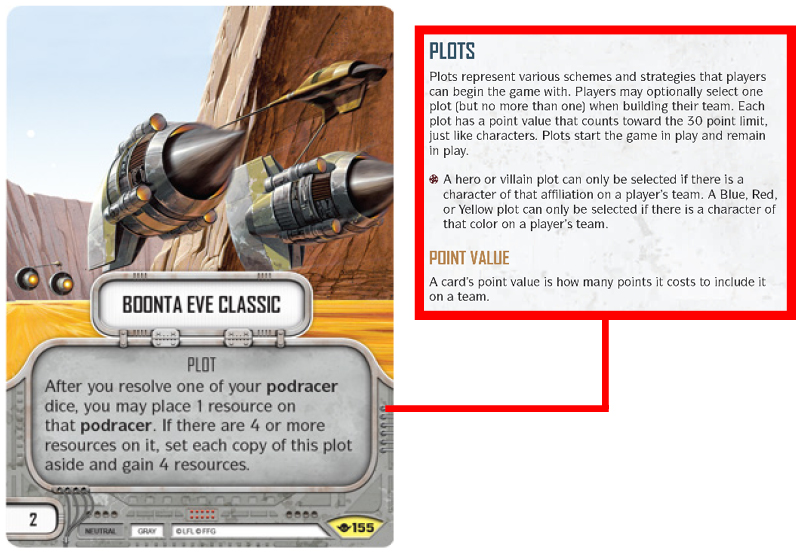 BOONTA EVE CLASSIC (1/5)
I don't believe podracer decks are viable until more podracers are added into the cardpool. This card will be unplayable until it happens.
5. GREY NEUTRAL BATTLEFIELDS: 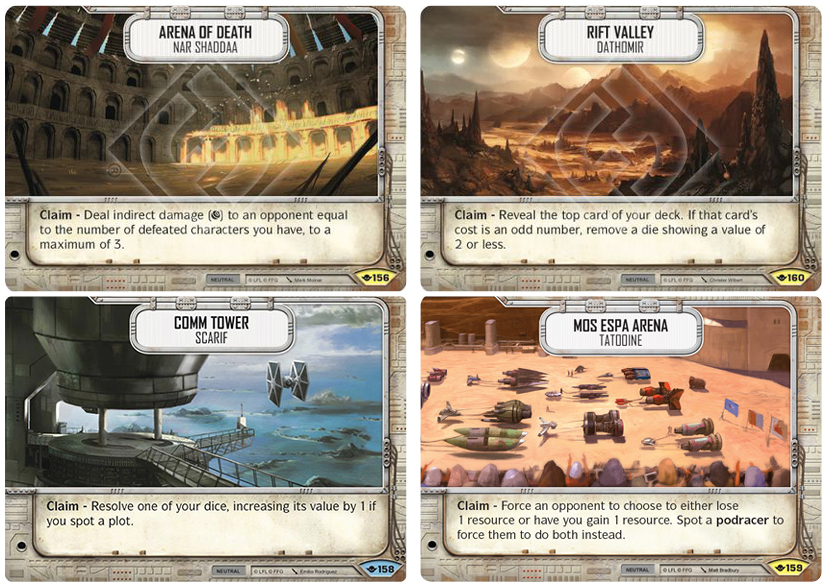 There is no evaluation of the Battlefields as they are so highly deck dependent and difficult to estimate in a vacuum.