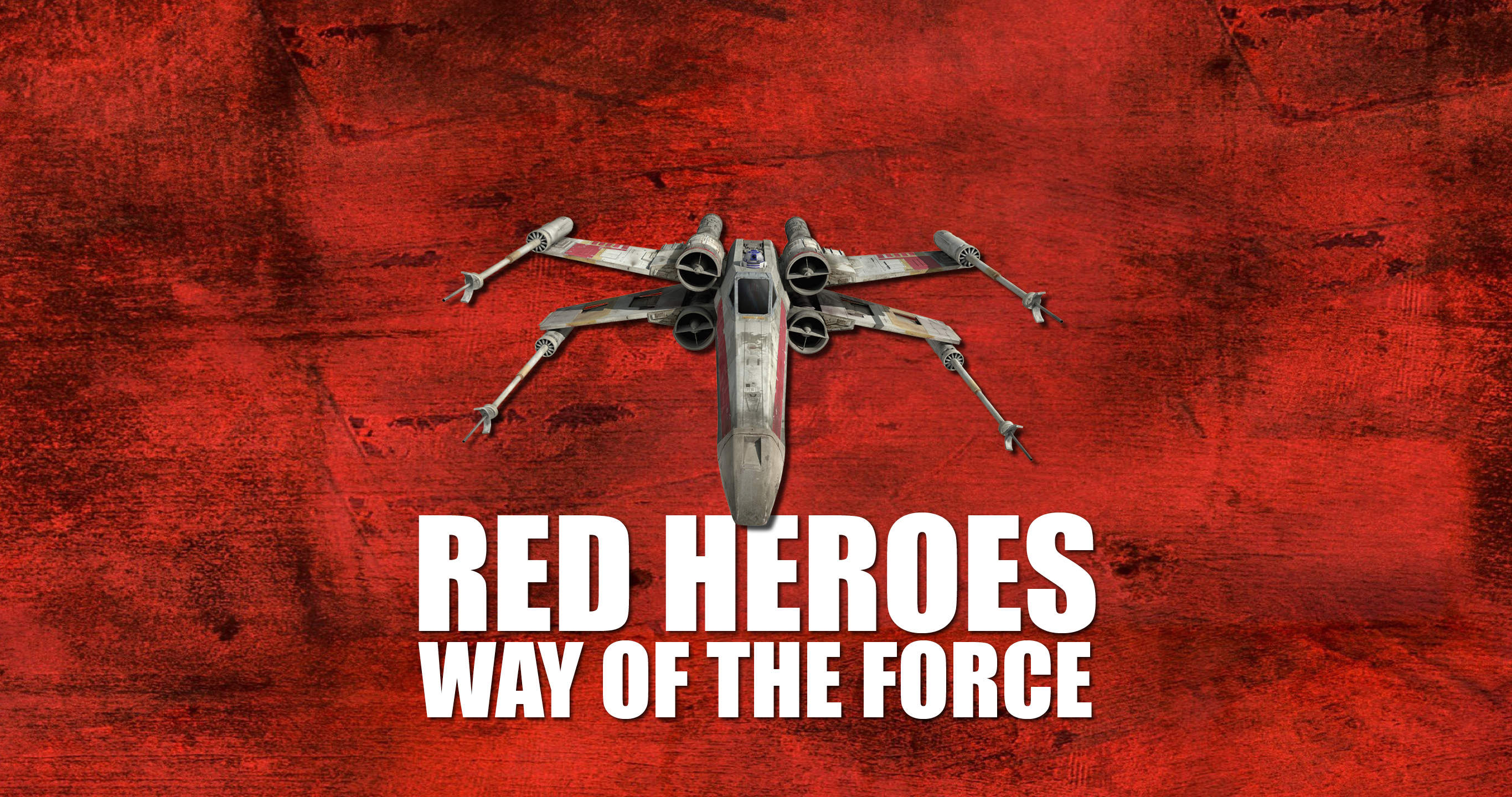 There are links to all the other parts of the set review at the end of this article!
1. RED HERO CARDS:Gungan Warriors and the whole Gungan Army shenanigans is hard to evaluate, and my ratings are not really reflective of how well the army potentially can work, but rather seen in context of the entire set, which then means the ratings are fairly low, which might seem a bit harsh.

Apart from that red heroes do seem to have received their fair share of love in this set with a few of the cards amongst the absolute best the set has to offer!
2. RED HERO CHARACTERS: 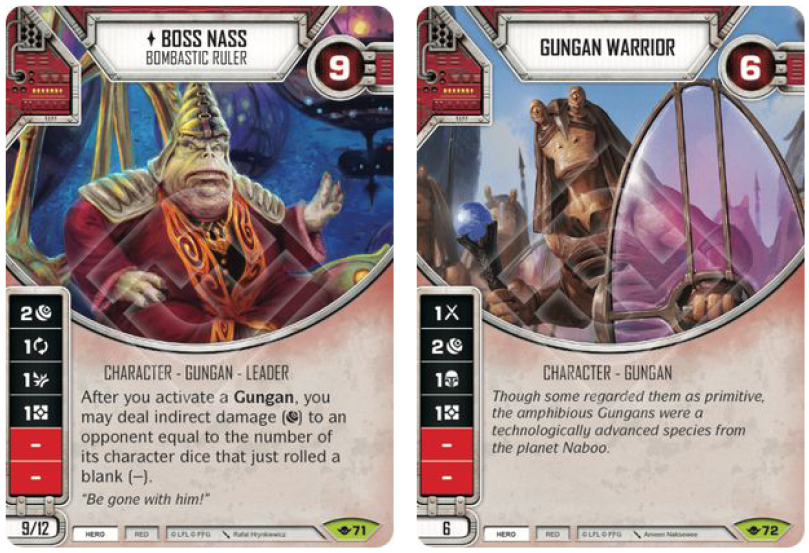 BOSS NASS (3/5)
Needless to say that Boss Nass' die is bad (although the focus could come in handy in a deck that otherwise has a million blanks), but that's not what mandates his point cost, it's his continuous ability which scarily enough actually makes Gungans "good". Thereby not saying that Gungans are good per se, but his ability sort of makes sure that there's quite consistent damage from them - even if they are not terribly good at it. He's a must in a Gungan army, but you're paying a lot for his special ability which is then not going to make him viable outside of that particular setup.

GUNGAN WARRIOR (2/5)
I am aware that a Gungan Army recently took a Store Championship. Alright, that said: Gungans are horrible, and honestly, I think it's a horrible design. They CAN put in some work though and in a concentrated Gungan army using cards like First Aid, Gungan Offensive, Gungan Catapult, etc., you might just be able to overwhelm your opponent with Indirect damage. 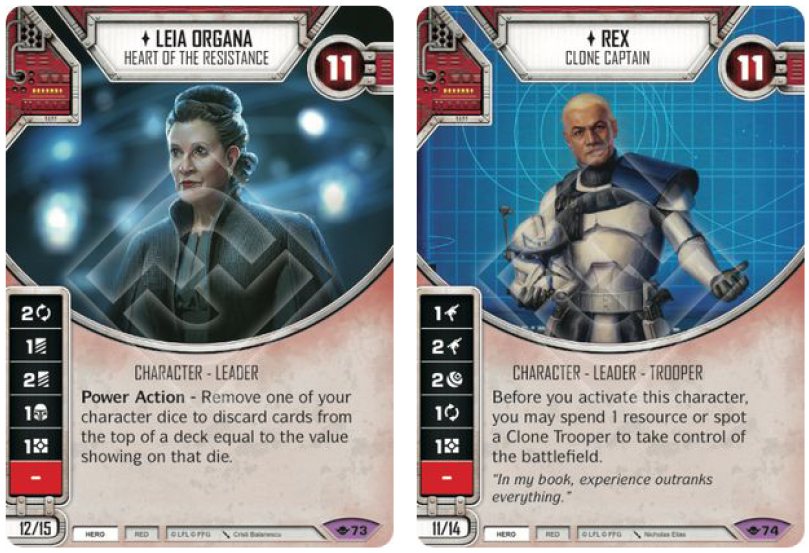 LEIA ORGANA (4/5)
I've already written a full article analyzing Leia Organa, but needless to say, she has been one of the most talked about characters in Way of the Force for one reason: IS MILL GOING TO BE TIER1!!

Everyone is asking the question and time will tell. From the outset it looks as if Leia has all the tools at her disposal to be the best hero mill character around either pairing up with Cassian Andor (red/yellow) or Yoda (red/blue), which will be the better is really up in the air.

One thing is for sure, the addition of hand mill to hero decks is going to be massive and cards like Commando Raid, Rebel, Motivate are going to put some work in!

REX (4/5)
Rex was for a long time talk of the town! He's not only a great support character boasting 11hp, but also comes with an incredible die. Most importantly he opens up for some excellent Battlefield control and really puts life into cards that have rarely seen play, while making red stalwarts like Defensive Position (arguably the best mitigation card in the game) and Dug In incredibly consistent. Whether used in a 3 wide Clone Trooper setup or in a 2 character build he's going to be a significant strengthening of red heroes, who have not really seen characters used consistently apart from indomitable Poe Dameron.
3. RED HERO EVENTS:

BLAZE OF GLORY (3/5)
This card really feels like going down in a Blaze of Glory. It can be used in two ways, to divert damage from another character or in a suicidal mode where you remove all an opponent's dice and kill off a character. You can deal that character more damage than he has health remaining.

DESPERATE HOUR (3/5)
Final Moment was a horrible card. Losing the game after the action phase without any insurances whatsoever of being able to eke out a win was too heavy a price to pay, and the card remained gimmicky at best. Desperate Hour on the other hand has a totally different potential. Being able to heal up a character after readying them using Field Medic or Dex's Diner actually makes this card playable. I'm not sure it's going to make it into a wide range of decks, but it will definitely see play.

FIRST AID (4/5)
Your second Field Medic, although limited to red characters only. It does have a huge potential though, and healing 4 damage in the first round of the game is always going to be a major setback for your opponent. It's going to be essential in Leia decks, Rex/Clone/x decks and beyond.

GUNGAN OFFENSIVE (1/5)
If you are running a Gungan Army you'll obviously nee to include Gungan Offensive, which can also turn your Mortar Team die, which is also pretty mediocre. The rating when included in a Gungan Army is of course much higher.

MOTIVATE (4/5)
This card has Leia Organa written all over it, and while it can be used in 3 or 4 wide red decks as well is designed to improve the die sides of Leia, which then becomes pretty impressive. Milling your opponent's hand for 3 is huge, obviously, but it is a true utility card that can be used as a Logistics on a resource side or giving shields in a pinch. The only downside is the spot requirement and you don't want to draw into this too late in the game.

REPOSITION (3/5)
Red heroes are not spoiled for choices when it comes to mitigation and Reposition might not be the best you can get (it's not), even if it is free, but could become an include in many monored decks out of necessity. It can be used both offensively and defensively.
4. RED HERO PLOT: 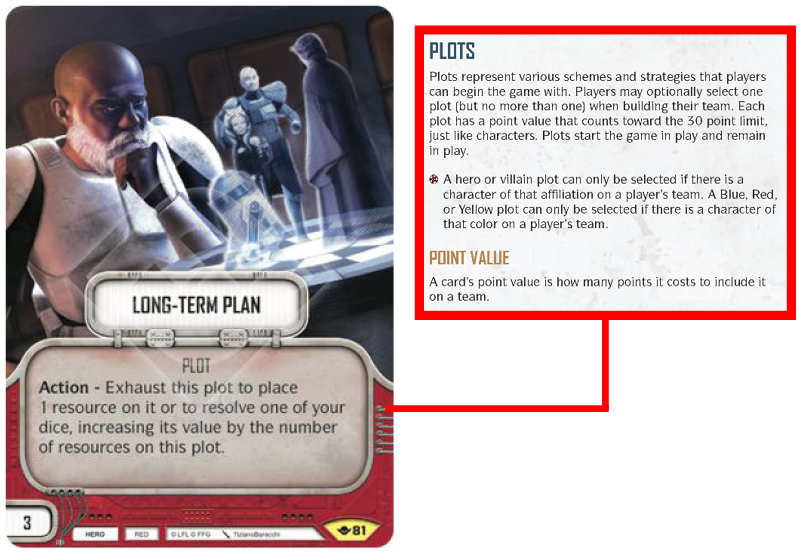 LONG TERM PLAN (3/5)
This is one of the plots I have the most difficulty finding out whether it's a waste of points or if that one decisive moment where you exhaust it to resolve a 3 Ranged damage as 6 Ranged damage, or resolve the Resource side to gain 4 resources to put down a Hailfire Droid Tank for the kill, is going to be a game changer. They didn't lie when they called it Long Term Plan.
5. RED HERO SUPPORT:

GUNGAN CATAPULT (3/5)
I've given most of the other Gungan Army crew and tools pretty bad ratings, but at least the Gungan Catapult is going to put in some work, and it better because a lot is riding on this to perform. The damage sides do look pretty menacing though. Downside is that the die is probably going to be rolled out first in order to get the re-rolls necessary to ensure the big hits!

RESISTANCE CRAIT SPEEDER (5/5)
Probably one of my two favorite red cards of the set! Resistance Crait Speeder is insanely good! All die sides are resolvable and it's special ability essentially makes the die out of this world. Add Rose to the mix, and you are looking at arguably the best support in the game, pound-for-pound. It would effectively be a 2R/3R/3I/2S/2RE/- for the price of two resources!! It is just terrifyingly good.

SUPPRESSIVE FIRE (4/5)
It is a unique design as it is the first reactive card in Star Wars Destiny, and allows for plays that have not yet been fully explored in Destiny. You could potentially claim out and still use the Suppressive Fire after the claim. Whether or not you'll want to recycle the support using Docking Bay depends on your deck however. Only downside to an otherwise incredible card is that it can only affect character dice and only on activation.
5. RED HERO UPGRADES:

ELECTROPOLE (3/5)
The pseudo redeploy on the Electropole is what saves the rating, but the fact that it only has one free base damage side is a huge downside.

INSPIRING PRESENCE (1/5)
For 2 resources you can turn a unique character into Captain Phasma from Awakenings. Problem is that nobody is playing her anymore because the Guardian keyword is not nearly as powerful as it used to be. Sure, in a 3 or 4 wide decks it will be useful, but rather than waste the 2 resources you could just bring Fort Anaxes instead.

REX'S BLASTER PISTOL (4/5)
Rex's Blaster Pistol is a pretty saucy gun. Three damage sides, all free, and although mixed they work really well with Rex, obviously, and in allowing to activate another character, i.e. a Clone Trooper, if you control the battlefield, you can re-roll your character die, whichever is the worst, and make sure to find the best possible outcome. It's as good if not even better than the Hidden Blaster and when played in a Rex/Clone/x character team on par with the ever so powerful DH-17 Blaster Pistol.BLUE VILLAIN REVIEW
RED VILLAIN REVIEW
YELLOW VILLAIN REVIEW
BLUE HERO REVIEW
YELLOW HERO REVIEWBLUE NEUTRAL REVIEW
RED NEUTRAL REVIEW
YELLOW NEUTRAL REVIEWGREY CARDS REVIEW
Written by
CLAUS STAAL