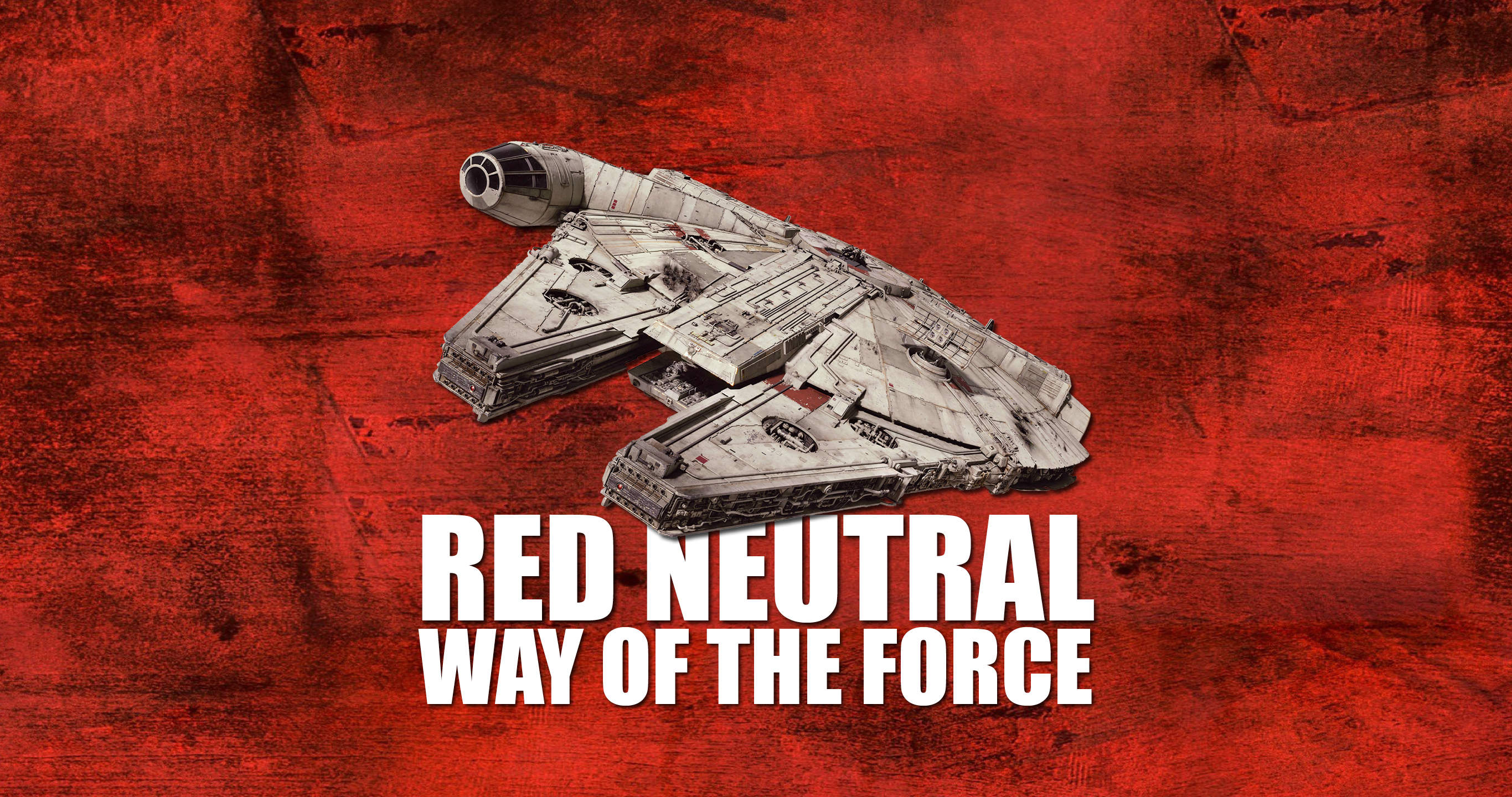 There are links to all the other parts of the set review at the end of this article!
1. RED NEUTRAL CARDS:I've gotten used to Red being overlooked or outpaced by the other colors, but this time around it looks like they can keep up. Way of the Force sees the addition of several cool neutral supports and quite a few useful events, with a few of the supports being stand outs in the set.
2. RED NEUTRAL EVENTS: 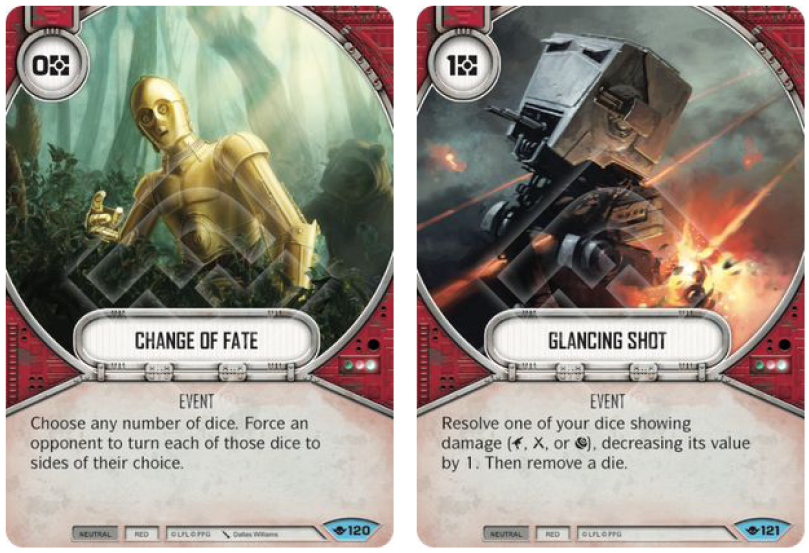 CHANGE OF FATE (3/5)
Change of Fate is a peculiar card because it looks as if it is designed to counter decks that use focuses to fix their dice rolls, or against decks that have very volatile dice and use re-rolls or card effects to improve their dice results, i.e. against an Obi/Maz deck that just used their last 2 resources on Concentrate to turn two Obi dice to 3 Melee, then you force your opponent to turn these dice to other sides, and since you have to actually turn it to another die side, they won't be able to afford the 3 Melee pay side. This might seem like a fringe situation but several situations like these occur often in games of Destiny. Although, I don't think this is the best soft mitigation card available, I still think it has got some game.

GLANCING SHOT (3/5)
Curiously enough, this die would be very useful in vehicle decks because their die sides, in particular their Indirect damage sides, are so big that they'll still be impactful AND remove a die, but then vehicle based decks already have Pinned Down as one of their premium removal cards. Glancing Shot will shine in a Cassian Andor (yellow/red, most likely Cassian/Leia) mill deck though. You get to resolve Cassian's Ranged Damage sides and remove an opponent's die, while still triggering the Cassian Special (milling one from the deck). Cards that remove any die are always good and Glancing Shot could even be an argument for also adding an Ascension Gun to Leia/Cassian decks.

GRAND ENTRANCE (4/5)
This can potentially be a great card. I could see it being used to great effect by a number of characters, i.e. Leia or Thrawn, for some plays where you need to hit certain die sides. Grand Entrance played off the back of a Force Speed special (Yoda/Leia mill) or a via Tactical Mastery in a Thrawn/Snoke vehicle deck or same play in a guns'n'fun Pryce/Cad Bane deck (although Cad Bane would probably prefer Take Flight for that kind of shenanigans). The main issue with the card is how to protect your dice. You don't want the sitting there in the pool being picked off by your opponent's mitigation. Securing that will be the key to success for this card.

HOSTILE TAKEOVER (2/5)
It's a bit of a meta dependent card, and does require control of the battlefield, so playing it with either fast decks or decks that are able to manipulate control of it is essential. My main concern with Hostile Takeover is the resource cost, which seems a bit steep, but in the right meta it can be incredibly powerful whereas in some match ups it will be a dead card in your deck and hand.

OVERLOAD (2/5)
Great way to rid yourself of cheap supports and becomes a way for red to kill cheap droids and  supports with action abilities or ongoing effects. It is limited in it's use and not nearly as powerful as yellow cards like Vandalize, but it is the only way for red decks to discard cheap supports from play and it's affordable. Interesting feature is that it can actually be used to put damage tokens back on your Ammo Reserves, although this combo is nothing but a gimmick. 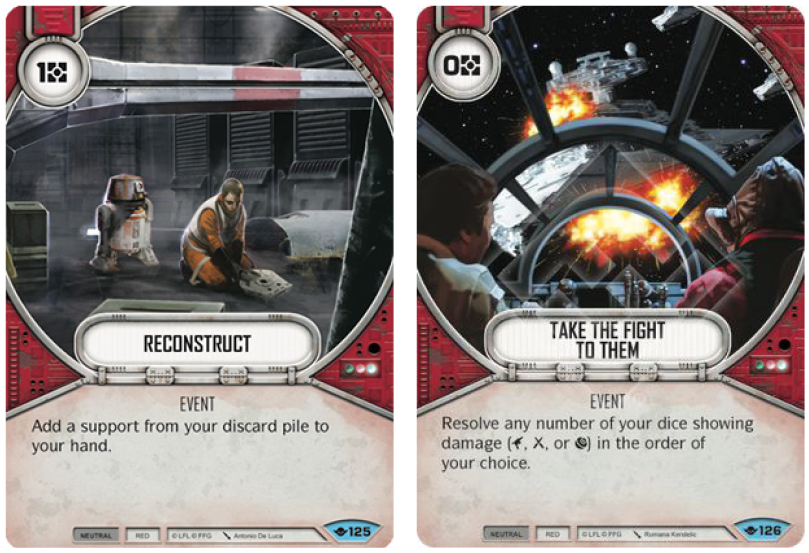 RECONSTRUCT (3/5)
If Overload is red decks equivalent of Vandalize (if weaker) then Reconstruct is the antidote to both. Having you all important C-3P0 discarded from play can be a severe blow to a mill deck or even a vehicle deck, or bringing back cards like Suppressive Fire or Suppression Field to shield up and mitigate out of turn, in either case Reconstruct might just be the answer red decks are looking for. It does feel like a good utility card.

TAKE THE FIGHT TO THEM (3/5)
A free All In that can only be used to resolve damage sides, and while this might seem weak compared to All In, it is quite good when dealing with mixed damage sides, whether it's vehicle decks with Ranged/Indirect damage or red/blue decks with Ranged/Melee sides. It can spring a surprise on your opponent as he might believe to have more time to sequence his plays.
3. RED NEUTRAL PLOT: 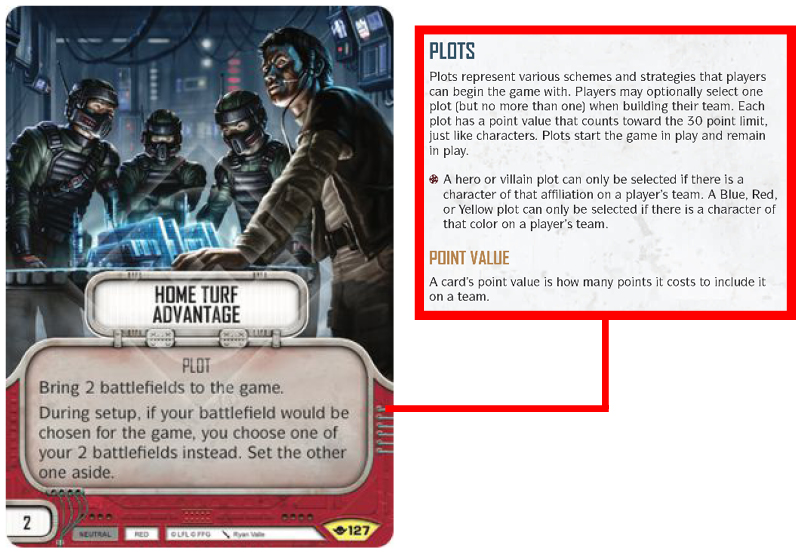 HOME TURF ADVANTAGE (3/5)
At 2 points Home Turf Advantage seems really good. Bringing 2 Battlefields to a game almost works like a small side deck. Bringing one Battlefield that will help against your bad match ups and one Battlefield that will be your preferred battleground could leave your opponent in a dilemma if he wins the roll off while giving you an advantage if you win it. If you on top of that have cards in your deck that will allow you to switch Battlefield during the game, i.e. New Order or Hyperspace Jump, that could prove to be a decisive advantage. I could see it come to great effect in various Rex or Pryce builds.
4. RED NEUTRAL SUPPORT/UPGRADES: 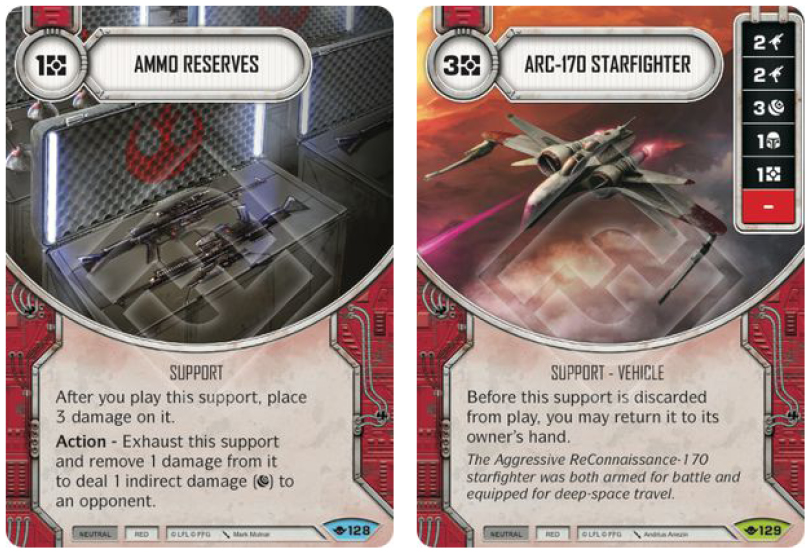 AMMO RESERVES (2/5)
A weaker version of Backup Muscle, and I think the keyword here is weaker. At a glance it looks almost the same, but it really isn't! Indirect damage is not 1:1 with direct damage, and this card feels severely underwhelming. Finn could be used to move the damage counters between characters and Ammo Reserves, or between Suppression Field and Ammo Reserves. Seems too gimmicky though and I'm not sure with options at hand that Ammo Reserves is going to see much play outside of janky decks.

ARC-170 STARFIGHTER (4/5)
Great addition to the arsenal of vehicle deck, and the ARC-170 Starfighter really comes with a terrific die eclipsing that of the Fang Fighter. The three damage sides look terrifying and the special ability is just icing on the cake. If discarding supports from play becomes a thing it will be a boost though. Even if the 3 resources lost is a blow, it could still be pitched to re-roll which vehicle decks tend to do a lot. The fact that it can be played round 1 with Weapons Factory Alpha in play is just great and makes it one of the best vehicles available for red heroes and villains alike. 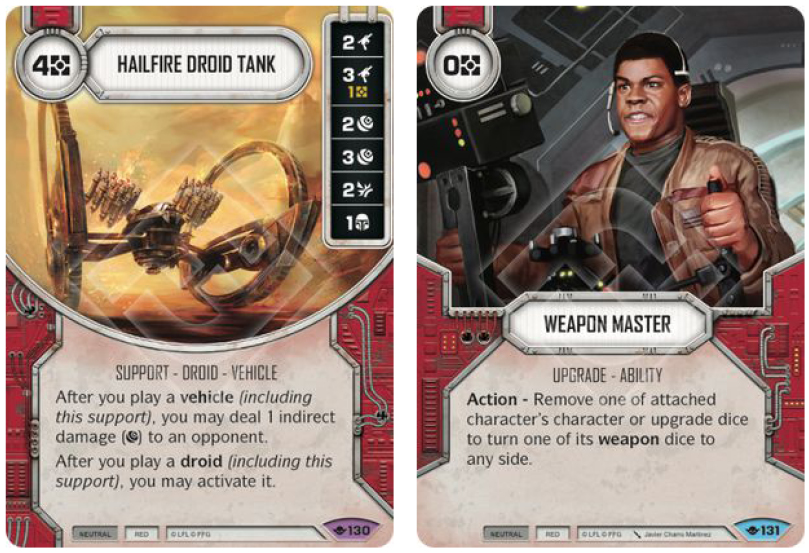 HAILFIRE DROID TANK (4/5)
Wow ... Just wow! No blanks on the die and two special abilities! That's amazing, and add to this 4 damage sides with just 1 pay side albeit the best side, then we are looking at one of the best vehicles in the game. It seems like a match made in heaven for Doctor Aphra vehicle decks, and I'm super excited to see what decks the Hailfire Droid Tank will find its way into. In any case, there's absolutely no doubt in my mind that it will become a staple in quite a few decks!