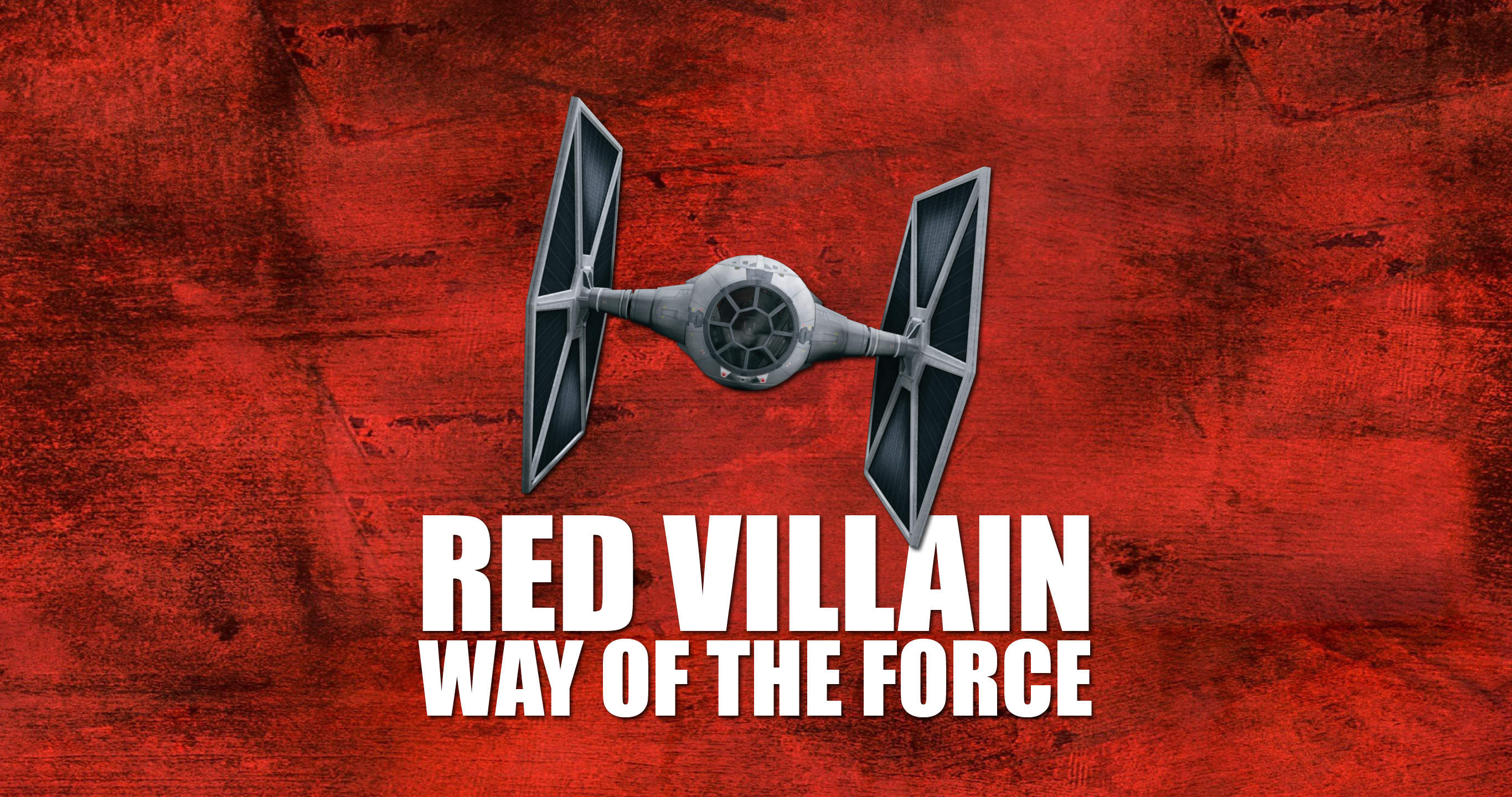 There are links to all the other parts of the set review at the end of this article! 1. RED VILLAIN CARDS:Red villains have definitely improved with the new set, although they seem to be below average compared to in particular blue villains that have come out on top in this set.

Villain players will be very satisfied though with having received not only Snoke, but also Arihnda Pryce, both of whom are probably the best support characters of the set. I guess there were bridges to gap after Legacies had brought heroes Yoda, Aayla and Rose, while villain players generally felt they had gotten the short end of the stick.
2. RED VILLAIN CHARACTERS: 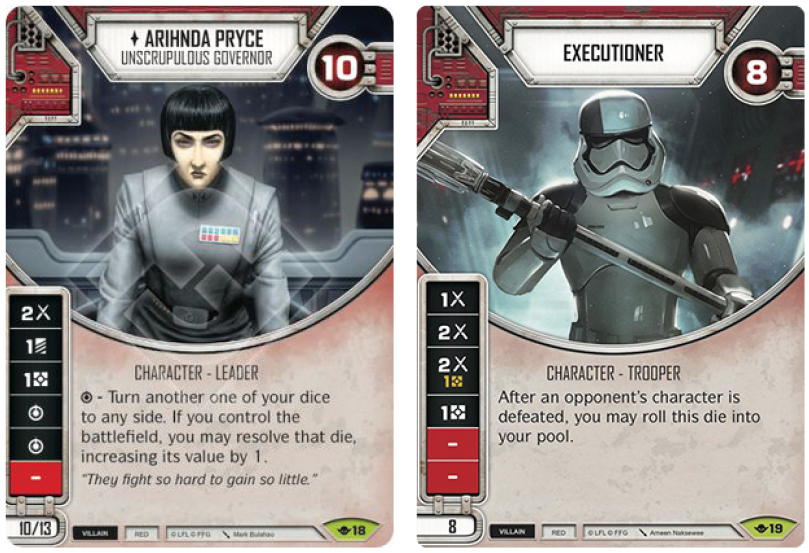 ARIHNDA PRYCE (4/5)
We already did an extensive character analysis on Arihnda Pryce, and although I'm not as excited as when I wrote the original article, I think Arihnda is still excellent value for her points. Her 10/13e cost means she slots in effortlessly with a plethora of characters such as Cad Bane, Vader - Dark Apprentice, Kylo Ren, Fifth Brother, etc. It's interesting that she is a melee character (and is thematically in line with several red characters in the new set: Executioner and Grievous) and therefor doesn't fit well with a lot of the best red upgrades available. But it does make her a perfect fit for blue villain characters and that's probably also where the best possibilities are outside of the  red/yellow Cad Bane team-up. It'll be interesting to see how hard the competition with Snoke is going to be for elite support character in 2 character teams. I don't think she'll be a very powerful 1die support character, here Snoke definitely takes the spot.

EXECUTIONER (3/5)
This one is really difficult, and the Executioner finds himself is in a weird spot. The die is identical to that of the First Order Storm Trooper, with Ranged damage swapped for Melee damage. The extra point (8 compared to 7 for the FO) buys you +1hp and a Special ability. Looking at it from a pure numbers perspective, that actually looks pretty decent, and compared to the Magnaguard with a similar die side (although one less blank, but two pay sides), you're are seemingly coming out on top points wise. The thing is that both the First Order and Magnaguard are usually there to shield one or two other characters, diverting pressure from a main character by virtue of The Best Defense or guarding away dice with Fort Anaxes. The Executioner is sort of in a different design space. You don't want the Executioner to die too early because then your investment in the Special Ability is wasted. All things considered I still think he's a cool support character, and he should be worth the investment if you can get to trigger the ability at least once. An interesting build could be ePryce/Executioner/Royal Guard? 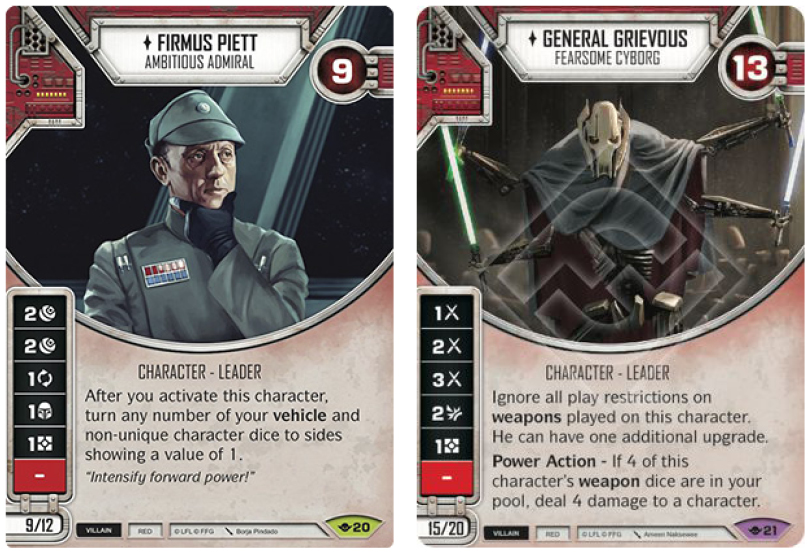 FIRMUS PIETT (2/5)
Firmus Piett is sort of all over the place. His die is quite good and the two big Indirect damage sides can easily come in handy. My main problem is that he's expensive and has a lame special ability. At 9/12e, he's competing with Snoke and Arihnda Pryce for support character spots and he's sort of losing that fight. Big time! I previously suggested him as a sidekick in an eTalzin/Outcast/Piett deck, but I guess that's more out of pity than of real use.

GENERAL GRIEVOUS (3/5)
Well ... old Grievous sucked and I'm not sure new style General Grievous fares much better. He will hit like a truck though, but is struggling to find good partners outside a 3 dice big/little deck. Getting 4 weapons on Grievous and triggering his power action is going to be VERY difficult, but at least we've found a home for the Crafted Lightsaber since we can't play FN-2199 anymore!
3. RED VILLAIN EVENTS: 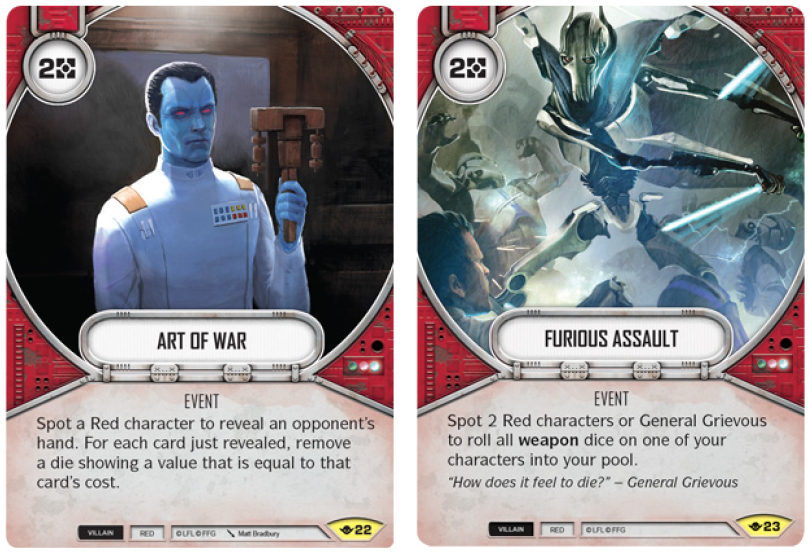 ART OF WAR (3/5)
This is an excellent removal card and if played in conjunction with something that gives knowledge of your opponent's hand, i.e. Friends in Low Places or Thrawn (and played with Thrawn the rating should probably be (4/5)), it has an absolutely massive upper ceiling. It can remove loads of dice. Even without exact knowledge of the composition of your opponent's hand, you'll never be completely blindsided as you can map it out fairly precisely. Remember that you are required to remove dice which could mean that you'll end up removing some of your own dice as well just to be able to rid yourselves of the best of your opponent's dice. Obviously, the bigger the chance you are taking, the less worth the card will be. Art of War does not favor the bold, but the smart.

FURIOUS ASSAULT (2/5)
If you expect to play General Grievous with 3-4 weapons regularly, then Furious Assault is going to be massive, but if not, then not so much. Worst of all is that the card will set you back 2 resources!

MACHINE REPLACEMENT (2/5)
The villain counterpart to Rearm (red hero), which allows you to play a red upgrade from your discard pile reducing the cost by 1, while Machine Replacement removes the play restriction, plays from hand and heals one. The soft spot for this card could be the fact that red villains do not have access to healing, which means that Machine Replacement really serves to separate functions. I think the jury will still be out on this one, but will probably end up in the negative.

OPENING VOLLEY (1/5)
This is an incredibly weak card. The evaluation of it is totally off, and to trade off 2 resources for 3 Indirect damage seems massively overpriced. Might be one of the worst cards of the entire set.

OVERRUN (2/5)
Battlefield control or manipulation definitely seems like a strategic avenue that FFG is exploring further (and will most likely continue to do in future sets). And there are some really powerful Battlefields out there. Normally Support based decks are resigned to having control of the Battlefield only once, when they start the game on their own Battlefield, never to see it again. There were early indications in Spirit of Rebellion with Lockdown (that worked with otherwise unplayable Director Krennic) and in Legacies with Ground Battalion that battlefield control was going to be a thing. What "that thing" will be exactly is still somewhat in the dark. The problem for most Support based decks is that they use Weapons Factory Alpha, and if they win the roll-off, they'll most likely choose their own Battlefield, but it has an ongoing effect, not a claim effect per se, which then makes the second part of Overrun obsolete. Unless there will be other positive effects of having control of the Battlefield, there is really no sense in playing this card. 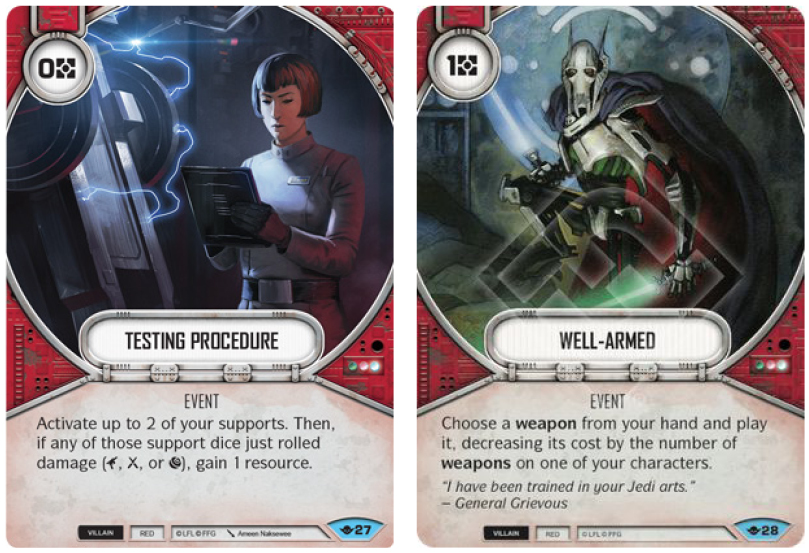 TESTING PROCEDURE (3/5)
This card is interesting because it's essentially a Logistics for vehicle based decks, which means that they can now ramp while getting dice in the pool. Normally you are not in a hurry to get all your dice in the pool, which is also the reason why a card like Deploy Squadron never was popular, but being rewarded for it with resources is huge for support based decks because it actively facilitates their win condition. I could see support decks gravitating around Snoke use Tactical Mastery into Testing Procedure into All In to devastating effect.

WELL-ARMED (2/5)
For the math on Well-Armed to make sense, you would need at least 2 upgrades in play when playing a 2 cost weapon or 3 weapons in play when playing a 3 cost upgrade. I don't see that situation happen often. In most instances I think the card will just balance itself out which means it's a dead card.
4. RED VILLAIN PLOT: 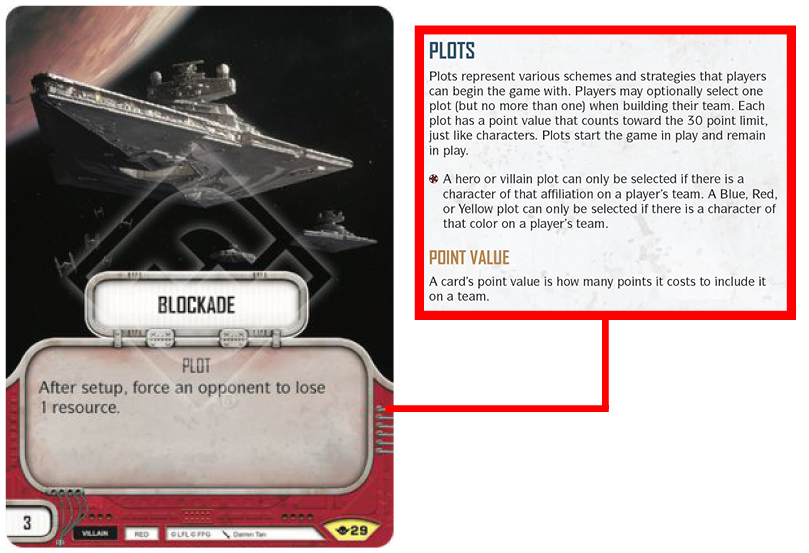 BLOCKADE (3/5)
The reverse Profitable Connections and only playable by red villains. It opens up some really interesting strands of play for 3 and 4 wide decks that normally suffer from characters who get upgraded too fast. Low health characters generally have a hard time against board states that mature too fast. I could definitely see Blockade put some work in against blue decks that will not appreciate having to pick up resources turn 1 BEFORE being able to play their first upgrade, and will also hamper the game plan of Cad Bane/Snoke, who is not resigned to not having an upgrade and therefor no action cheat. A new approach to control choke, maybe coupled with yellow for Salvage Stand plays and going all in on choke, maybe even the nerfed Imperial Inspection, which in my mind is still good.
5. RED VILLAIN SUPPORT: 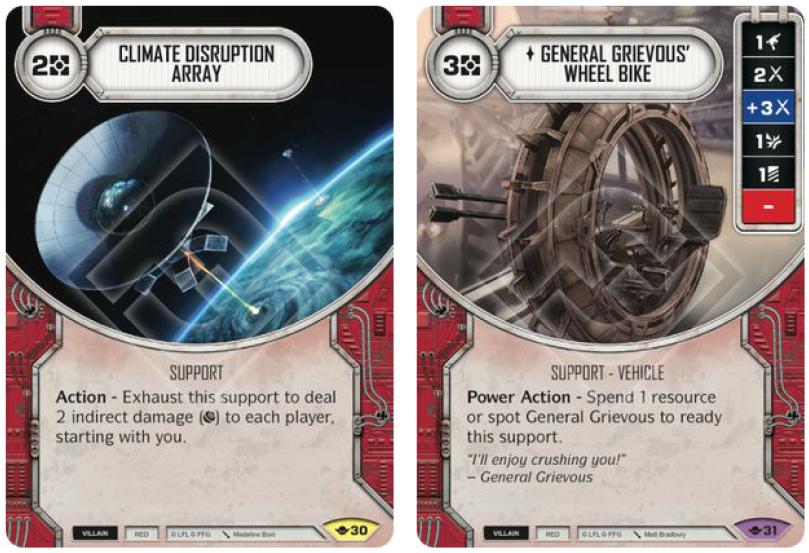 CLIMATE DISRUPTION ARRAY (2/5)
While Dooku goes all environmental friendly with the Solar Sailer, red villains pull in the opposite direction. Unless you can get rewarded from dealing yourself Indirect damage, i.e. Torment, or can consistently block the damage, I don't really see where this line of thinking is going. Maybe in some iteration of a 4 wide deck with Attrition, Endless Ranks, etc. it could be useful, but it also seems as if you are putting a lot of effort into making a bad support mediocre at best. I'm ready to be proven wrong, but for now, I reserve the right to put Climate Disruption Array on the bench.

GENERAL GRIEVOUS' WHEEL BIKE (2/5)
You will never play this support with General Grievous as the whole game plan is to put upgrades on him, and there's no way you will ever be able to afford both. So the Power Action will now cost you a resource, which makes it much less powerful. On top of that the die really doesn't fit other support based decks, and the Wheelbike will most likely be one of your least favorite legendaries of the set, although not the worst. 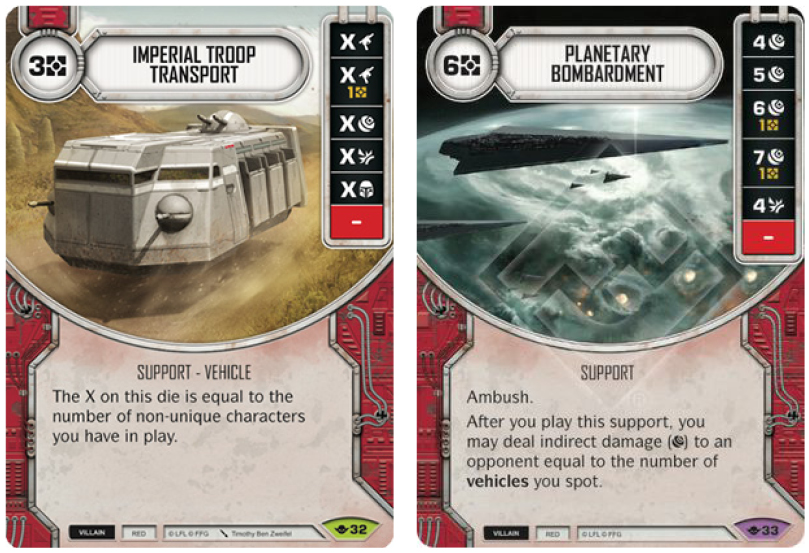 IMPERIAL TROOP TRANSPORT (2/5)
So 4 wide decks or 5 wide Battle Droids just got a bump. If only there were ways to make resources for the Battle Droids, this would be an ok card. All these "x-die" cards are just too unreliable to make their way into competitive decks. 4 of the sides are quite good though.

PLANETARY BOMBARDMENT (4/5)
Initially I believed Planetary Bombardment to be too expensive, but the decks that will utilize it will be flush with resources. And the die is BONKERS! I've never been a fan of disrupts, but when you can disrupt 4 resources then it's a different matter entirely. That's obviously not why you brought your Imperial Star Destroyer fleet to the party, I know, but just sayin'. Planetary Bombardment is really out of this world in Thrawn/Snoke, and as we talk about in the article, more often than not you'll be able to play it in round 1.
6. RED VILLAIN UPGRADES: 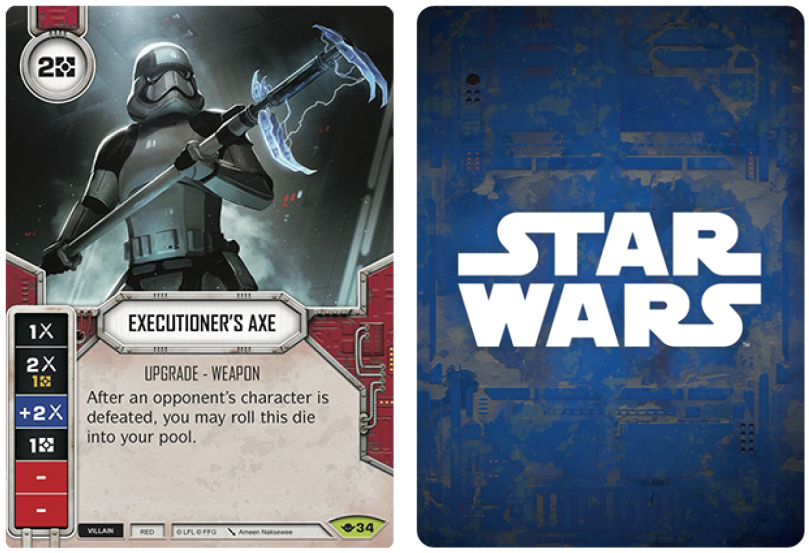