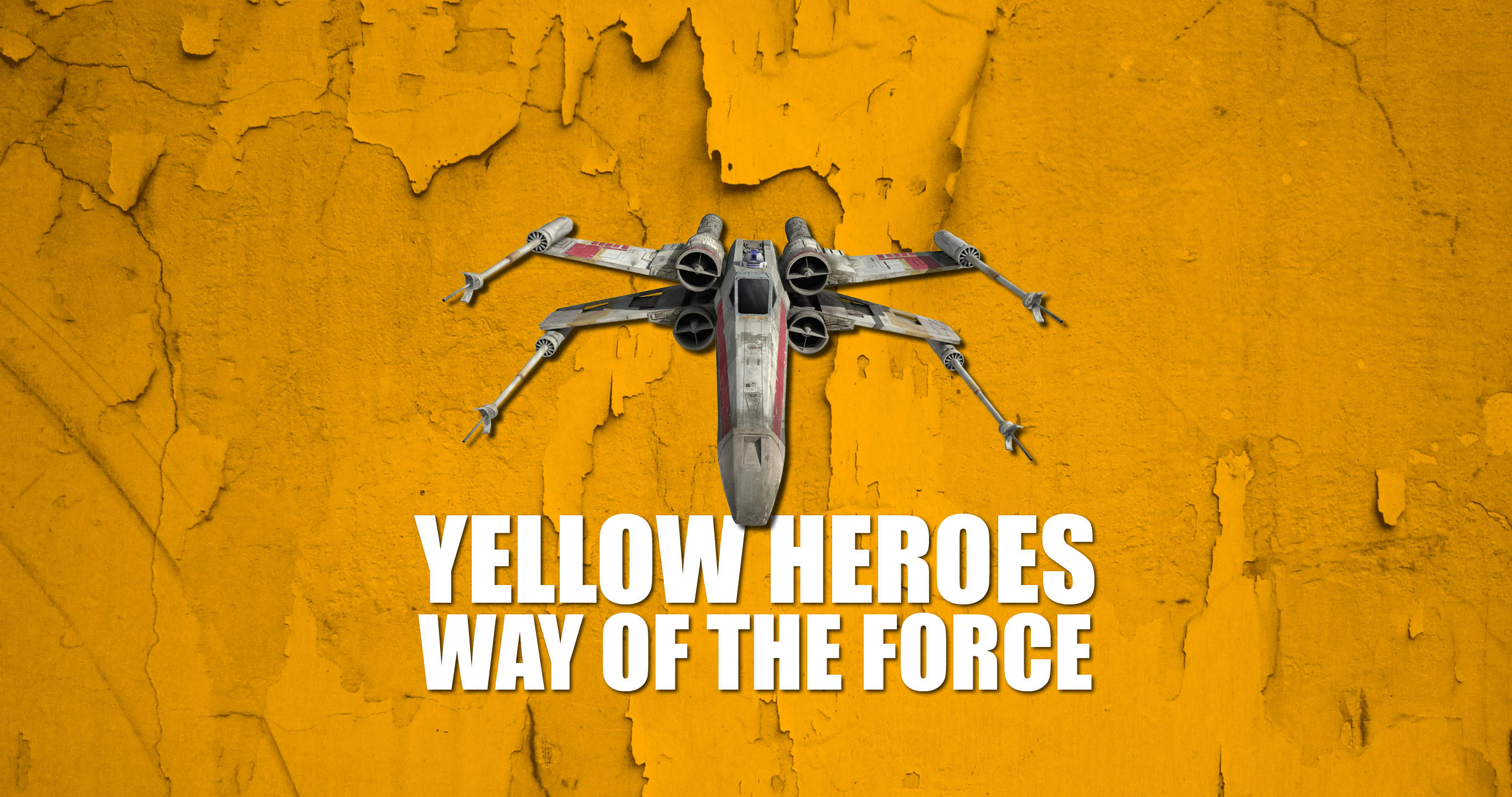 There are links to all the other parts of the set review at the end of this article!
1. YELLOW HERO CARDS:Yellow heroes look like they got shafted on the Events of the set, but it was made up to them by receiving two of the best characters of the new set. Generally speaking though there are definitely a few cards that will see a lot of play and a few that'll sit in mint condition in your binders for years to come.

Mill decks will be happy and a few of the cards should slot in effortlessly with existing or new mill creations.
2. YELLOW HERO CHARACTERS: 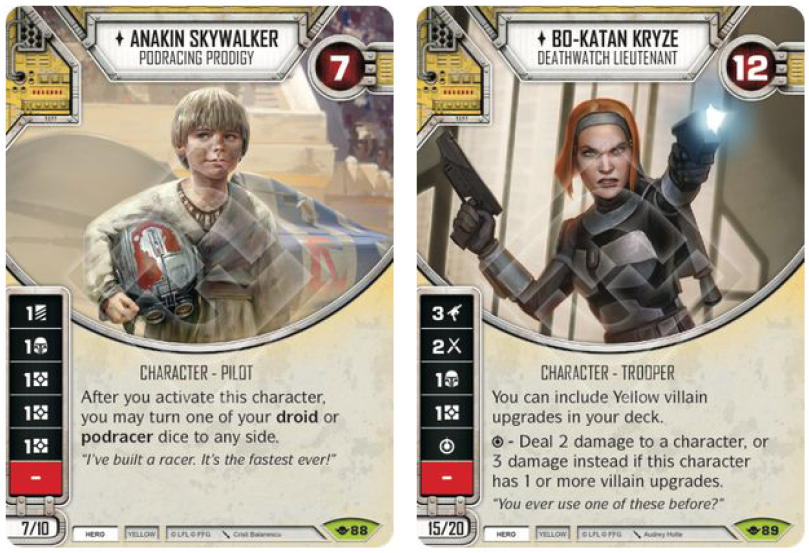 ANAKIN SKYWALKER (4/5)
Little Anakin is good ... as in REALLY GOOD! A character, although squishy, with 3 Resource sides is golden! An ability on top of that might be good in the right deck is just icing on the cake! His price of 7/10 means he slot nicely into a lot of 3wide decks and will probably be a favored support character for hero support previously occupied by Ezra Bridger. The ability to consistently ensure resource is amazing, and in rainbow decks he'll go along with Logistics for 2 almost guaranteed resources round 1. He's absolutely BONKERS in Trilogy Format.

BO-KATAN KRYZE (2/5)
I'd love to say something nice about Bo-Katan Kryze, but find it difficult. 15/20 points is just incredibly prohibitive, even if she does boast 12hp, and I fear she'll be a marginal character at best in Standard Format. Her three damage sides might just save her, but there are a lot of great hero alternatives where you only sacrifice little power compared to price. She might see play going single die together with a good support/main character. 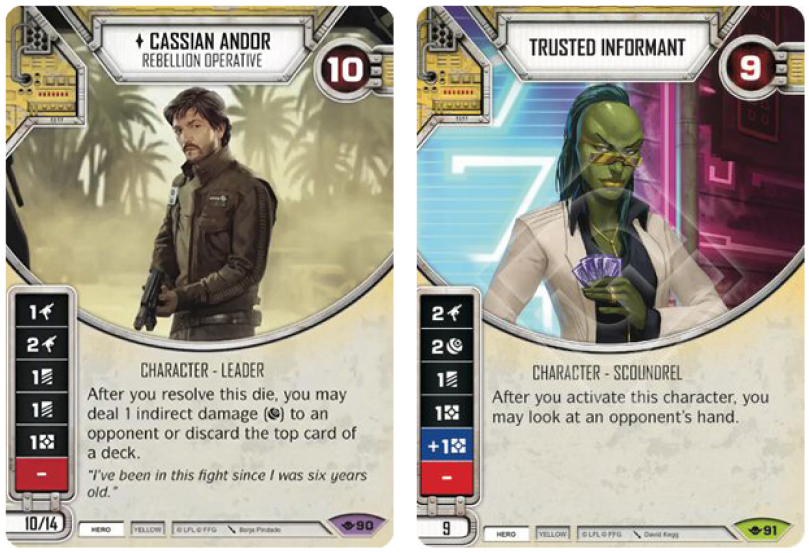 CASSIAN ANDOR (5/5)
With Cassian Andor we are definitely aiming for the gold. He's incredibly powerful and can be used both in aggro decks and mill decks. It's one of the worst kept secrets in Way of the Force that he slots in perfectly with Leia Organa for maybe one of the best mill decks in the game, although it is a bit premature to make a final call on that. His ability is absolutely out of this world, mimicking that of Emperor Palpatine, and enabling powerful mill plays with Jedha Partisans as well as being able to hit on two fronts, both milling and killing! His die sides have low face value (1/2/1/1/1/-), but are other than to die for! Already one of my favorite characters of the set, and definitely going to see lots of competitive play whether pairing up with Leia, Poe Dameron2 or someone entirely different. It just proves his versatility and usefulness.

TRUSTED INFORMANT (1/5)
Do not let yourself be fooled by the ability of the Trusted Informant. It SUCKS! Hand information is generally only good if it's coupled with hand disruption, i.e. Thrawn or Friends in Low Places. being able to see your opponent's hand, just to know what cards he's going to use to defeat you is silly. Definitely not a fan, and while the die is not bad, it's all over the place and offers nothing that would make it worth our while to include her. For 1 more point, you'd be able to get a single die Cassian or an elite Anakin Skywalker2!
3. YELLOW HERO EVENTS:

CLANDESTINE OPERATION (4/5)
This is a wicked card in a mill deck! Thing is that it allows you to resolve dice AND mill cards from the top of your opponent's deck. Played with Leia you can reliably resolve Resource, Discard or Shield sides, and Jedha Partisan's you can resolve Resource or Discard sides (and Ranged as well), and because you are resolving the dice Cassian Andor's special ability is still triggered. Your could potentially mill your opponent's entire hand and discard 2 cards from his deck in one swift action. In addition this remember that the good old Rebel just became exceedingly better because of the boost to hand mill, which means you could play this card several times during a game.

CLOSING THE DEAL (2/5)
Although I'm generally not in favor of cards that end your possibility of interacting without also ending the turn, i.e. Retreat or Hyperspace Jump, I do find myself liking this card. I'm not sure if the rating should be higher, but I'm still not entirely convinced of its merit. 5 resources is a lot (even if you're just netting 2), and if you can play it round 1, you're going into round 2 flush with resources, but you'll also be a sitting duck after having played it. It does fit in nicely with the new plot Calling in Favors though. You'd be able to play this event for just 1 resource essentially netting 4.

DEFENSIVE RACING (2/5)
It's an Endurance for vehicles, but there are too many conditions for me to really like it. Sure, it's great getting your vehicle die back in the pool, but it also has a spot requirement, and we know how people react to seeing a yellow hero character - they smell blood! They'll try and massacre that character as fast as possible, unless you play more than one, in order to turn off all your spot yellow cards, which is exactly what will happen to this card as well.

DUMB LUCK (1/5)
Well ... you are rewarded for bad rolls and a potential 5 Indirect damage is a lot of damage out of hand, but then you'd also be left with 5 blank dice sitting on the table. It's a thematic (because of the 2 blank sides on the Gungan Warrior and Gungan Catapult dice), but also silly card. You could fix up to 3 of your dice afterwards with a Gungan Offensive, but then you'd have spent 2 cards and 3 resources for a rather questionable outcome.

MECHANICAL INSIGHT (1/5)
This card seems a bit off when you can ensure the same main effect of finding a Podracer with the yellow neutral card Start Your Engines. Filtering through your deck is an added side effect, but that is not always desirable. So, unless your Podracers are so crucial to your game plan that you need four Podracer tutor cards, then I think, I'd just go with two Start Your Engines.

NARROW ESCAPE (2/5)
It's actually a pretty powerful piece of mitigation. Remove a die for 0 resources is good, but the condition that you cannot have any other cards in your hand makes it less than desirable. And with so much amazing yellow mitigation this is definitely on the top of my list - far from it. You could be forced into some very suboptimal plays, where you need to empty your hand merely to be able to remove a die. If that's your out it doesn't look good.

RIGGED DETONATION (2/5)
At first glance Rigged Detonation looks like a very situational card, but then looking at the possible development of the meta, we might be looking at decks that are going to amass vast amounts of resources (including all Thrawn and Snoke decks), and here we are looking at a card that's going to punish them for doing exactly that. It'll probably regularly be 2-3 Indirect damage for 1 resource, while the cap of 5 Indirect damage is quite massive. Needless to say that it would have been a whole lot better if your opponent didn't need to control the battlefield and thereby offering him a turn to get rid of some of the resources.

RIGHTEOUS CAUSE (2/5)
This a tricky card. It has a great deal of potential with both Ambush and being 0 cost, but the fact that it's just your own cards of the same type makes the card much more restrictive. I do see some nice plays with vehicles though, including the new Resistance Crait Speeder, but do think this whole combo thing is very limiting.

SCOPING THE TARGET (1/5)
Obviously, being able to defeat a character for 1 resource is quite amazing, but then look at the card again: 10 different symbols. There are currently 10 symbols in the game, which means that you need 10 dice in your pool. If you have that kind of dice available, I don't think you need Scoping the Target to defeat an opponent's character. Move along nothing to see here.

SHOOTOUT (2/5)
Shootout is very difficult to evaluate. Although it is very similar to Never Tell Me The Odds, it is in fact a different beast altogether. First of all you get to turn UP TO 3 of your opponent's dice to sides showing damage, THEN you can turn the same number of your own dice to sides showing damage. Turning your opponent's dice is of course not really in your own best interest, although the upside could be that you are able to mitigate big damage sides into smaller damage sides, and maybe even against mill decks turn dice from mill sides to damage sides. I think the main issue here is the cost of 3 resources, and you'd never to be able to dish out some serious damage for it to be useful - if at all.
4. YELLOW HERO SUPPORT: 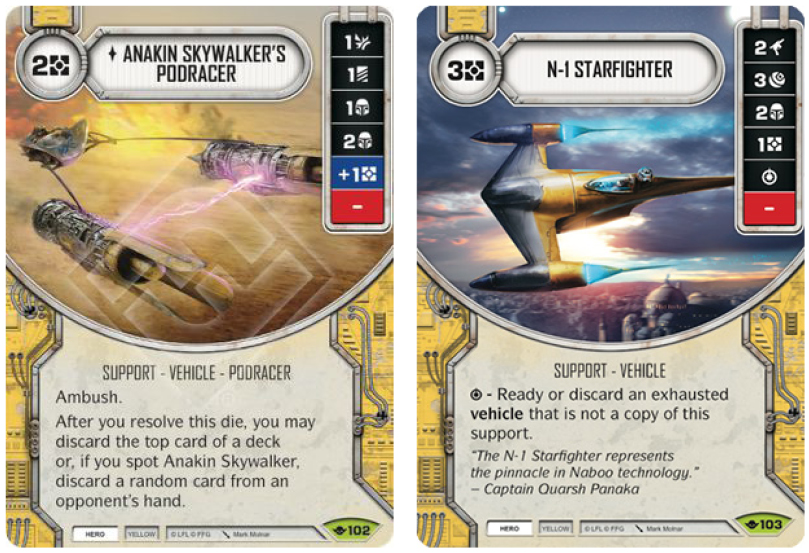 ANAKIN SKYWALKER'S PODRACER (4/5)
I think this is a great card and it fits very well into yellow hero mill decks. It covers one of the bases often lacking for yellow hero mill namely shield generation, and could be one of the puzzles to make Leia Organa based mill decks work. Leia essentially trades the Shield sides for Discard sides (compared to General Rieekan), but this is then offset by this little beauty. I like the Ambush, because Leia mill decks want to play fast, and with Anakin Skywalker's Podracer you don't lose tempo in the round you play it! It's obviously going to be great with little Anakin on the team discarding from hand rather than deck, and suddenly makes the +1 Resource side very attractive.

N-1 STARFIGHTER (3/5)
What a great die!! The Special is situational, but incredibly powerful if you can trigger the effect. Thrawn/Snoke will not be happy to see this beast sitting across from them. I'm not sure if the N-1 Starfighter will have what it takes to out compete support staples for Rainbow Hero Vehicle decks, but it's not far off the mark.
5. YELLOW HERO UPGRADES: 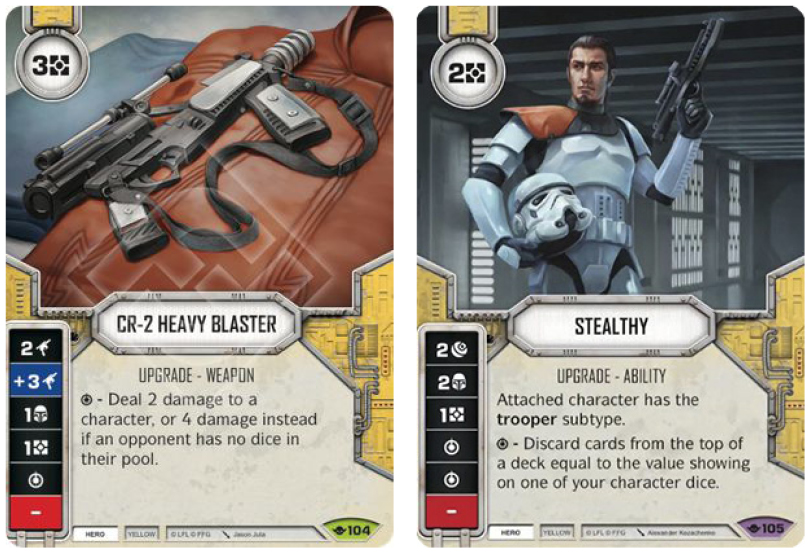 CR-3 HEAVY BLASTER (3/5)
Yellow hero is generally not blessed with great 2 cost guns. You can blame Sabine Wren, although the nerf to her might change things in future sets. The CR-2 Heavy Blaster is also not a 2 cost upgrade, but it is a pretty decent gun. I'd rather have seen another black Ranged damage side, but the Special can be nasty. If you can get the gun on Poe Dameron2, and activate with Hit and Run, it could be 4 damage right off the bat. It's not overly impressive though, and don't get all hot over the Special: Treat it as a 2 damage.