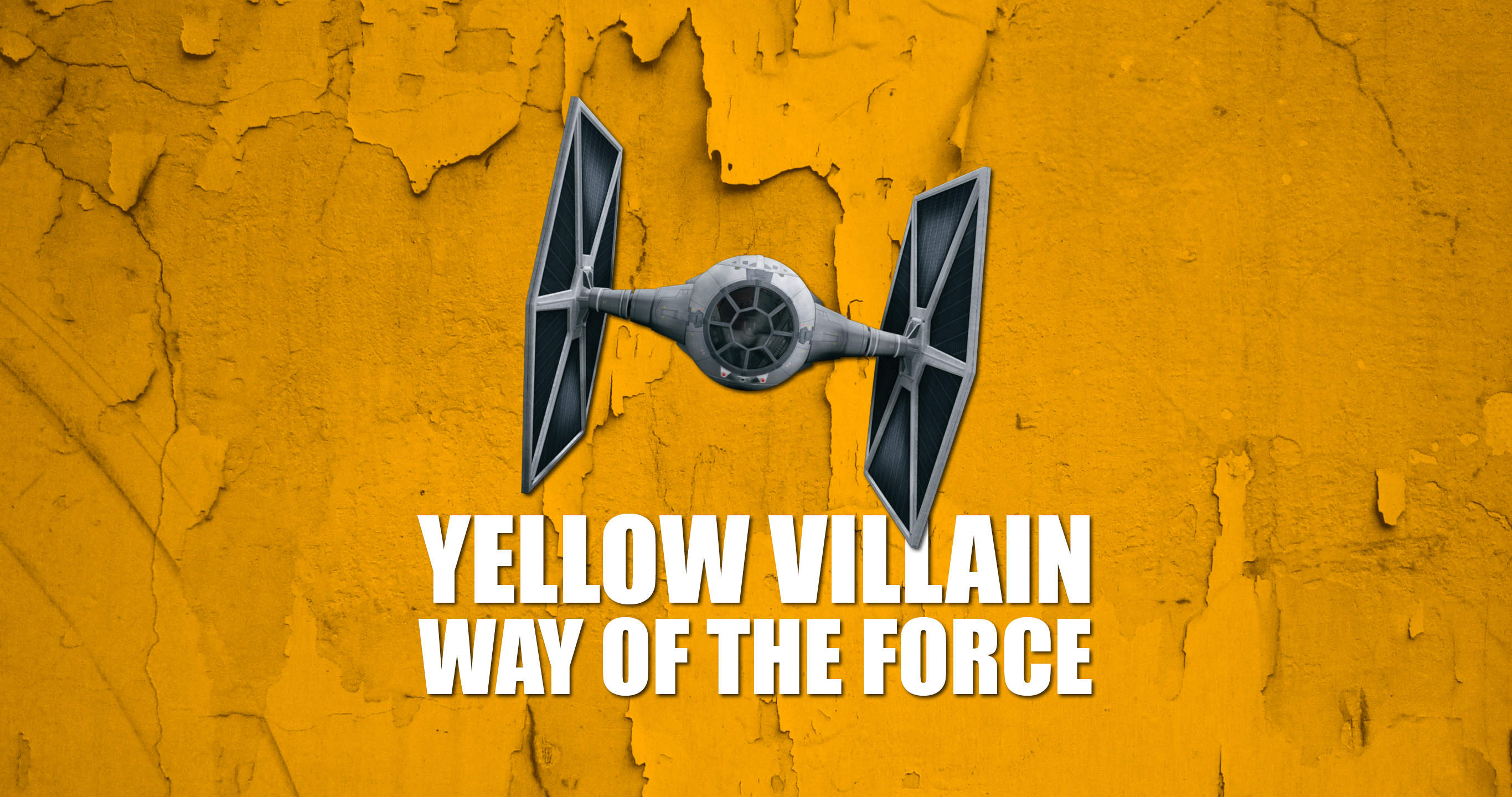 There are links to all the other parts of the set review at the end of this article!
1. YELLOW VILLAIN CARDS:It honestly feels like yellow villains got the short end of the stick in the set, with one of the Legendary cards being absolutely rubbish. Yellow villain cards are generally speaking extremely thematic, which is great from a casual perspective, but horrendous from a competitive perspective.

It does have a few highlights though and while I'm not overly satisfied, at least Doctor Aphra got new toys to play with!
2. YELLOW VILLAIN CHARACTERS: 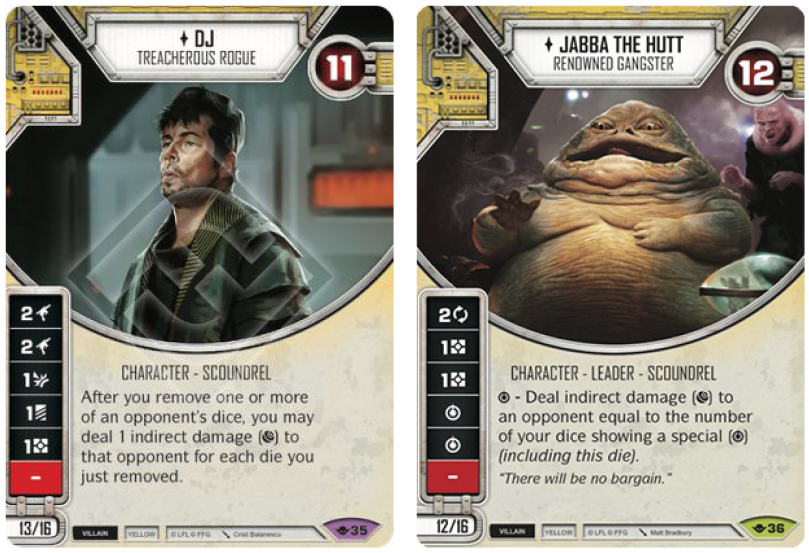 DJ - TREACHEROUS ROGUE (3/5)
His die sides are decent for his cost and he follows the regular health pool for WotF standards. Now, as per the changed design idea for sets since Legacies, he boasts a Discard side, and although the Disrupt side is nothing splendid, his Special might come in handy if we start getting access to more powerful villain/neutral mitigation or other cards that will trigger off being dealt Indirect damage (like the Jedha Partisan for Hero). He's not a full blooded aggro character, and I'd probably be looking for 3 wide builds to make the most of him.

JABBA THE HUTT - RENOWNED GANGSTER (1/5)
I'm really less than impressed with him, even if he did receive a health bump from the older Awakenings version. The only thing which can raise a brow and stir interest are his two Resource sides, which enables cards like Salvage Stand, Bait and Switch as well as some cool Fair Trade plays. If future sets unveils more (cheap) cards with Specials, I could see him becoming a decent support character, for now he's going into the binder. 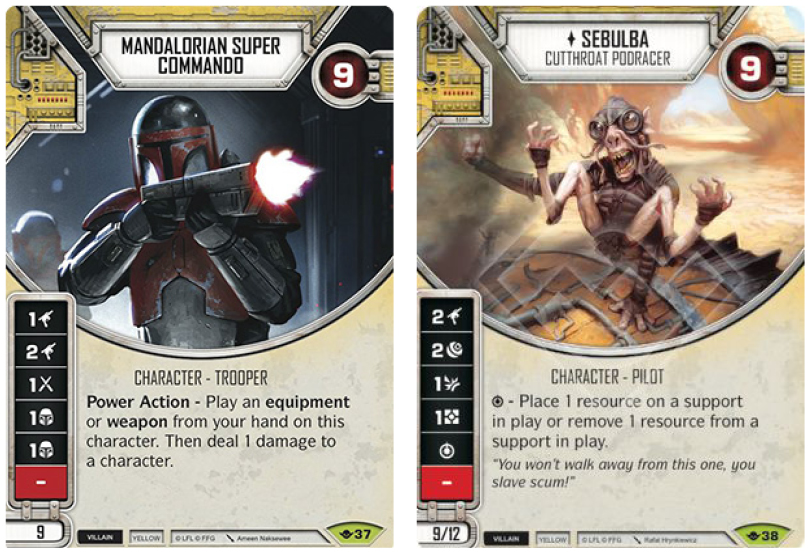 MANDALORIAN SUPER COMMANDO (3/5)
If his ability was not a Power Action and could be abused over and over again, the Mandalorian Super Commando would have earned himself a 4/5 rating. His die sides are good, although pound-for-pound he's not much better than the Guavian Enforcer. And in that direct comparison the two Shields sides are essentially offset by the Guavian's Action ability. Mixed damage sides are there to be thematic with the new Mandalorian Vambraces, and goes well with other cards like On the Hunt, but most of the cards that combo the best are not equipment. So far he looks the best with Mother Talzin, but then why wouldn't you go 5 dice Rainbow Villain instead?

SEBULBA - CUTTHROAT PODRACER (3/5)
I've raised the stock a bit for Sebulba because he comes relatively cheap, although low on health. He's in a funny way the Villain counterpart to Rose, but is less of an enabler. He doesn't really facilitate great plays, and looks a bit off. He's obviously designed to go into a support deck using his podracer and Sebulba Always Wins, just unsure if this isn't really just too ineffective, although your opponent will be sad to see your Planetary Bombardment gone in 2 swift actions. If only his Special didn't say "Support", but included upgrades as well then matters would have been different.
3. YELLOW VILLAIN EVENTS:

BY ANY MEANS (2/5)
It goes well with Dr. Aphra, but the card is worse than a number of the alternatives (unless you actually play Aphra in which case the rating should be 4/5) as you are both paying 1 resource, limited in which cards you can remove and deal Indirect damage to yourself.

COCKY (2/5)
This card is going to be good in a monoyellow mill deck. I'm not sure if it's going to be enough to bring Unkar/Jabba1 aka Hungry Hippos back to life, but it does offer some alternative routes for hand disruptions. Remember that you can still play the card even if you are left with 0 or 1 card left in your hand. You just have to fulfill as much of the card effect as possible, and there's no "then" condition on the card. Overall it looks pretty weak though as you are essentially spending 3 cards (with 3 cards in hand) and an action to Discard 2 of your opponent's cards.

EXTREME HUBRIS (2/5)
2 Resources is expensive, in particular with the double spot/spot Jabba requirement as well. Blue Heroes can do almost the same, but with Ambush and the play restriction on your die instead (My Ally is the Force) Playing it with Jabba2 and potentially having quadruple focus is actually quite powerful, if only you could find a way to make a good yellow/x villain support deck.

NEFARIOUS DEED (2/5)
There's a funny thing with Nefarious Deed, namely that it can restock your Backup Muscle (which is not discarded from play even where there are no damage tokens left on it). Redeeming feature is that it has Ambush and cost 0, but the limitation to what tokens can be moved, and that it has to be an opponent's card is a bummer.

PAID OFF (2/5)
Giving an opponent resources is generally a bad idea, which is also why I'm not a huge fan of Truce, but being able to resolve an opponent's die is great. There are so many powerful dice in play atm, although it is limited to character or upgrade dice and therefor cannot hit big side support dice, but it does enable some powerful plays. The card also enables your opponent though as he'll be flush with resources after you've played the card (and a 4 resource swing is huge). If you can find a way to remove the resources again (or removing the cards that the resources can be spent on), possibly using Infamous to play Paid Off, then you might be able to pull off some stunts (but then we are also talking about a combo which takes time to set up).

PARTNERS IN CRIME (2/5)
Disrupt sides are the worst dice sides in the game (in a vacuum). Now, at least you can use them for something, and because Indirect damage sides are usually big, then disrupt becomes better. It looks as if resource management in general is becoming much more important in the Way of the Force meta, which in turn means that being able to control, disrupt or steal your opponent's resources is important. I could see the card come into use in decks that have several Indirect damage sides (preferably face value of 2 or higher) and continuously disrupt your opponent and thereby degrading or stifling his board state.

QUARREL (1/5)
"Choose either/or" cards suck because you can choose to lose 0 resources/cards, if you have none of one or the other. You're essentially using an action and a card to make your opponent drop a resource or a card.

RANCOROUS (3/5)
It's a good removal card and will be considerably better in Trilogy format as removal cards are scarcer and generally speaking much less powerful. The condition is normally not hard to fulfill and while you pay a resource you also get to remove any die unconditionally! That kind of removal is always good! 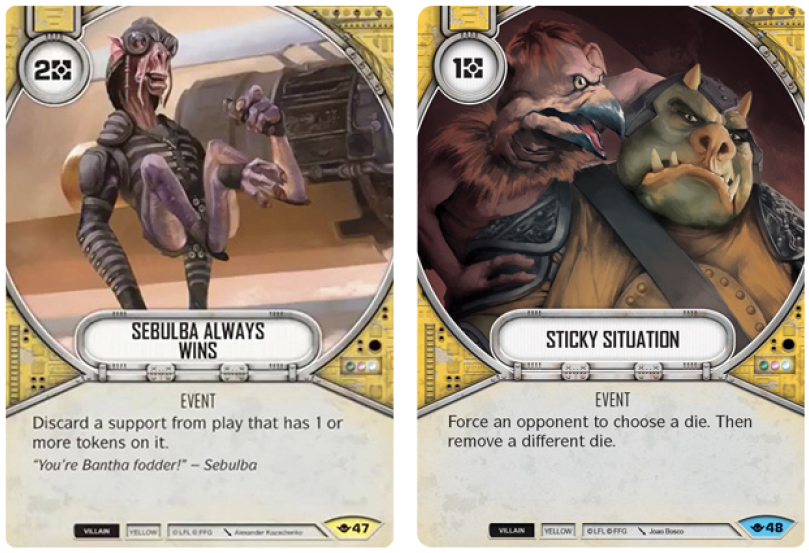 SEBULBA ALWAYS WIN (3/5)
If you play with Sebulba this card is going to be massive, and in that particular setup I'd rate it (4/5). Even if you pay 2 resources, removing a Planetary Bombardment or a Modified HWK-290 right after it's been played is just crazy good. There is currently a lot of supports being introduced that either start with tokens on it or have tokens added as an effect, and well ... Sebulba of course can do his part in facilitating that.

STICKY SITUATION (2/5)
This card is good against decks that rely on few powerful dice to win the game, i.e. Big/Little decks such as Obi/Maz, but against decks that flood the pool with dice this card feels somewhat obsolete. It'll be better in Trilogy Format though.
4. YELLOW VILLAIN SUPPORT: 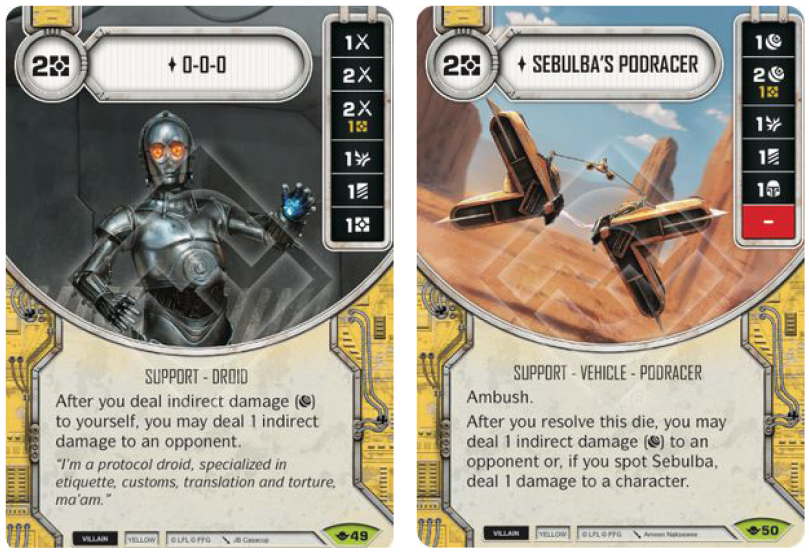 0-0-0 (4/5)
Of all the cards in the yellow villain package this is the one that gets me excited the most, and it might just be what will lift Doctor Aphra from mediocrity into the higher echelons of Standard Format competitive play. It comes without any blank die sides and finding ways of dealing yourself Indirect damage is not that difficult (By Any Means, BT-1, Delve, etc.) and it can start an avalanche of effects that combined will punish your opponent every round. 0-0-0 can feel a bit a marginal, and is probably at risk of not seeing a lot of play outside of specific decks, but it's still a powerful card, which you of course need to build around, but is rewarded for doing so!

SEBULBA'S PODRACER (3/5)
Played while spotting Sebulba this fancy podcaster is quite powerful with it's improved mini-Palp effect, but even retains the ability without the spot requirement. If only the die sides were better it could have been one of the focal points of a nice villain support deck. The rating reflects the fact that the after effect does boost the mediocre die somewhat.5. YELLOW VILLAIN UPGRADES: 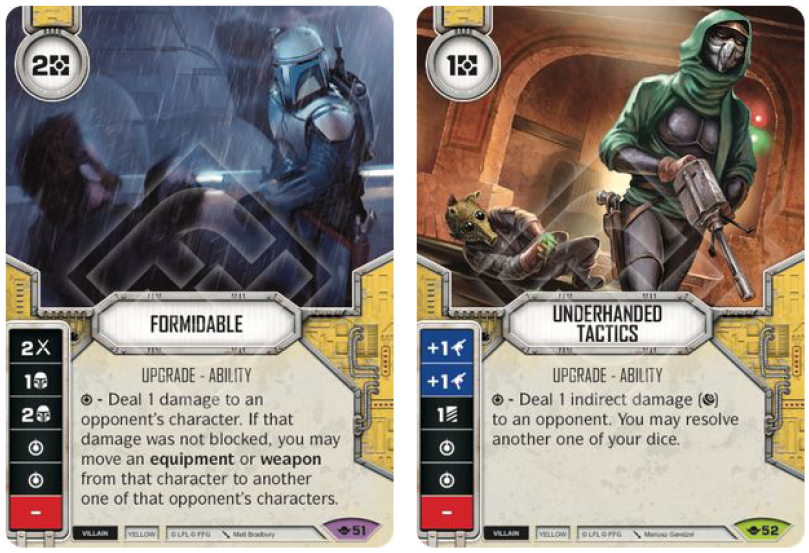 FORMIDABLE (1/5)
This upgrade is really bad. Not minding that it's also Legendary. The Special is a conditional Cargo Hold and while it can also work as mitigation, it just doesn't cut it. 2 resources is expensive, and you expect something more powerful. The die is also really funky with a weird mix of everything and nothing.

UNDERHANDED TACTICS (4/5)
Cheap and should fit straight into 5 dice Villain (Free-for-All version) with its two +1 Ranged damage sides and a nice Special. The die is actually pretty good for a one cost upgrade, and I'd want to resolve all the sides, and should see plenty of play in decks with guns or lots of base Ranged damage sides. I was also happy for the Mandalorian Super Commando, right up until I realized that it's an Upgrade - Ability .... BUUUUH!BLUE VILLAIN REVIEW
RED VILLAIN REVIEWBLUE HERO REVIEW
RED HERO REVIEW
YELLOW HERO REVIEWBLUE NEUTRAL REVIEW
RED NEUTRAL REVIEW
YELLOW NEUTRAL REVIEWGREY CARDS REVIEW
Written by
CLAUS STAAL