EXCLUSIVE WAY OF THE FORCE SPOILERS FOR YOUR DESTINY: 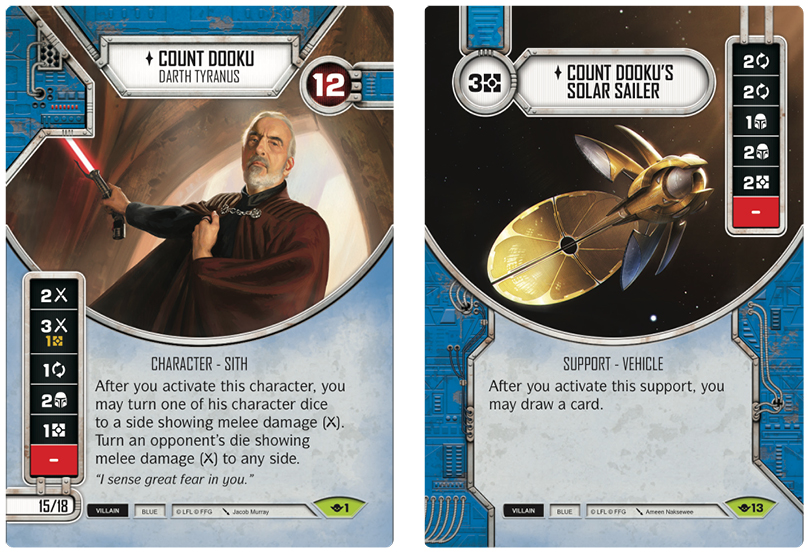 The FULL RESOLUTION spoilers are posted at the end of the article!
COUNT DOOKU:[MADS UTZON]
I kinda like Dooku. 18pts is A LOT though. When running a character this expensive you are very limited in your deck building options. First thing that comes to mind though is Mother Talzin! Talzin has more than proved herself on the competitive scene and this might be a powerful partner.

Talzin's ability to focus dice upon activation has proven incredibly strong. Dooku is not only able to fix his own dice, he can also blank the opponents effectively giving you a free Clash every round by activating Dooku.

Dooku's health is great at 12pts and his dice are actually deceptively powerful. Do not underestimate a 2 Shield side. When focus is your worst side (besides blank) your rolls tend to be strong!

Another potential partner is Greedo in a prize of failure type deck. Reactivating characters is powerful but often it is done when low on resource and cards severely limiting your options with the reactivated character. Dooku takes care of this problem and is guaranteed to deal damage when reactivated. Even with 0 cards in hand.

His strong activation ability might make him good enough to support a 3dice setup with another powerful character: FN-2199. This also gives access to Electrostaff which is a powerhouse on Dooku making him focus into his big 3 sides and not having to pay for them.

All in all, I think Dooku is just shy of being strong enough for the competitive scene. He is obviously not broken nor under costed, but his ability is super strong in the right meta and maybe he could show up in winning deck list from time to time.

[CLAUS STAAL]
Looking at characters that are somewhat comparable, I find Count Dooku to be in a very difficult spot. Not only are 15/18e points difficult to slot in, but the fact that he has a 3 Melee for 1 resource side can severely limit his possibilities in a competitive setting.

Obviously, it’s going to depend on what characters you’ll be able to partner him up with. Look at how it went with Cad Bane in the Empire at War meta (and he has a somewhat comparable die and points cost to that of Dooku: 13/17 to 15/18). He ran wild with Captain Phasma, then the Balance of the Force hit, and he’s been lost ever since. As Mads is suggesting, the obvious choice seems to be Mother Talzin. Talzin’s ability to fix her own or Dooku’s dice as well as Dooku’s activation trigger seems to be a match made in heaven. Whether that character team is better than Kylo2/Talzin is somewhat less obvious.

I think Dooku’s 2 Shield side is bonkers though. That just boosts his stock a bit.

For a crazy Blue/Red deck I could see him teaming up with 2 Battle Droids to give access to Electrostaff, Imperial HQ and some nasty Price of Failure plays (although Bala-Tik will have a field day against you).

I’m generally not in favour of 3dice character teams, so unless some great 12point elite character shows up, I think it’ll be difficult for Count Dooku to muscle himself into the top tier decks.
COUNT DOOKU'S SOLAR SAILER:[MADS UTZON]
OH BOY! What a card to get to evaluate!

The closest card (in power level), I can think of, is Hounds' Tooth. Now, Hound's Tooth doesn’t see much competitive play these days, but that is due to villain vehicles falling out of favor for hero vehicles with its crazy Rally Aid ramp. Do not for one second get fooled into thinking that Hound's Tooth isn't a very strong card (in a vacuum).

Count Dooku's Solar Sailer might even be better. Drawing a card when activating is a VERY powerful ability. It’s always hard to combine a hand that does everything you want it to do and vehicle decks needing a density of both vehicles, ramp AND mitigation to function, any extra cards greatly help at making it all come together. You also see vehicles losing out to cards like Close Quarters Assault demolishing their entire hand and round. Being able to draw cards for free after having your hand destroyed is a convenient and easy way to make sure you don’t loose the round entirely. 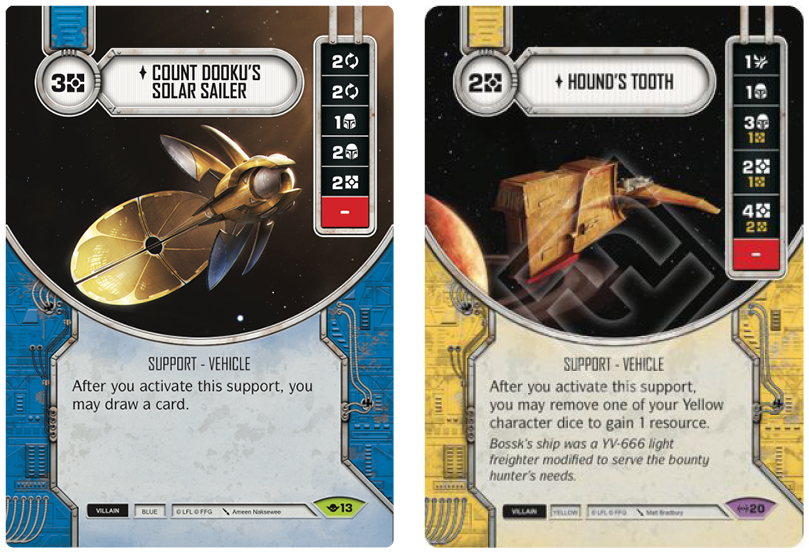 The die is incredible! I think a double Resource side is the best side of any die in the game period (the Chance Cube 3 Resource side is actually a 2 Resource due to it costing 1 to roll out). I also think a double focus side is really strong and last but not least vehicles decks tend to really want shields and this thing brings a double shield side. I can see myself resolving 4 of its 6 sides easily. That is not something that is said for a lot of 3 cost villain vehicles. On top of that it helps fix my draws and give me functioning hands.

The down side of course is that this vehicle brings 0 damage sides. I would have loved to see it bring 1 or 2 damage sides to help close out games. The 2 Focus helps of course but there are spots where you just need your vehicles to deal actual damage and this thing just doesn’t get there.

All in all a VERY powerful vehicle with an incredible ability. If villain vehicles finds it way back into the spotlight this card will work itself into them.

[CLAUS STAAL]
It’s crazy how villains continuously get new vehicles that never sees play. With Legacies, Hero vehicles decks just took off (looking at you Rose and Yoda), and left their villain counterparts for dead. But then again, Count Dooku's Solar Sailer is a different beast altogether.

Isolated, Count Dooku’s Solar Sailer is great! It has an incredible die, and is probably close to the perfect support vehicle. It has 1/3 focus sides (and both of them 2 Focus), 1/3 Shield sides and a 2 Resource. Just think about what kind of work Thrawn/Talzin decks are putting in with Chance Cubes and the 2 Resource side on Thrawn. The Solar Sailer die is actually superior to that of Thrawn.

The special ability of drawing a card is definitely what makes this support shine. In most decks filtering through your cards is vital - and even more so in vehicle decks. If we are to see the Solar Sailer hit gaming tables often this ability will be a major reason why, while the lack of damage sides is a major downside to a vehicle that’s going to cost you 3 resources (unless villains receive something similar to Rally Aid).

I do hope there will be a way to start playing villain vehicles/support again; and maybe Thrawn/Talzin and the Solar Sailer is not a bad place to begin (there was a Thrawn/Talzin support deck in top16 at EUROS 2018!).

Thank you for reading - and thank you to FFG for letting us (the content creators) spoil these great cards!
FULL RESOLUTION IMAGES: 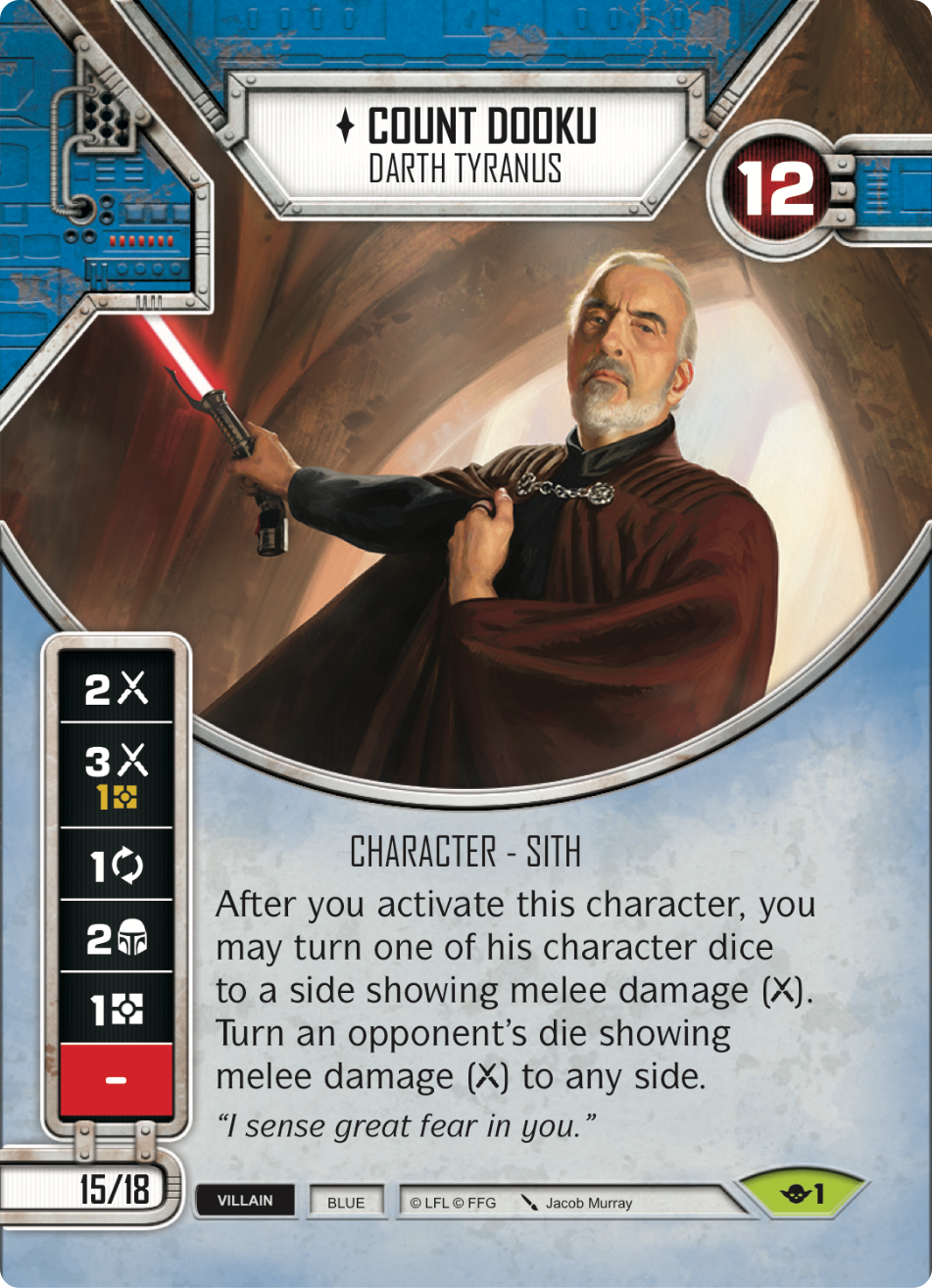 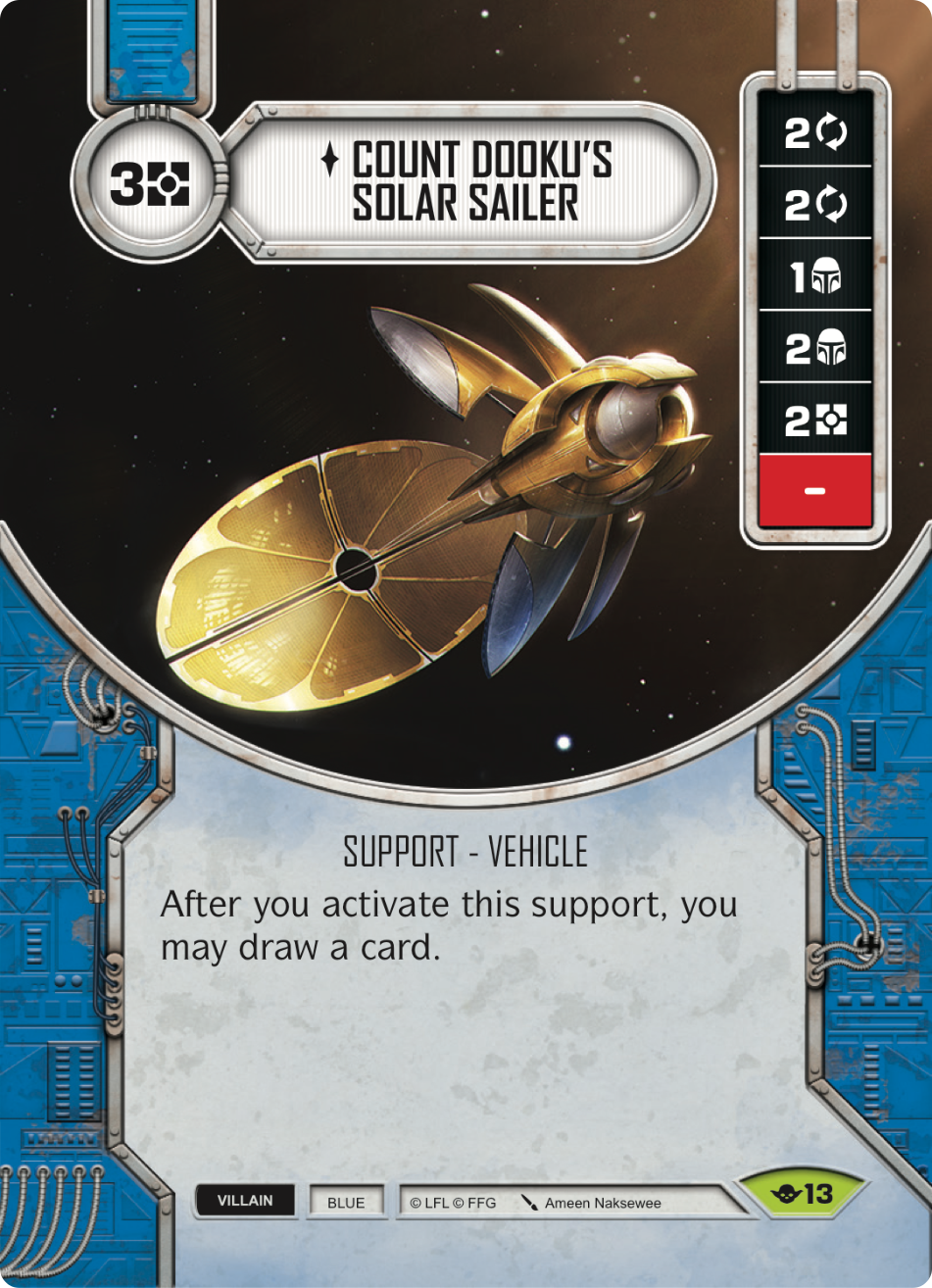