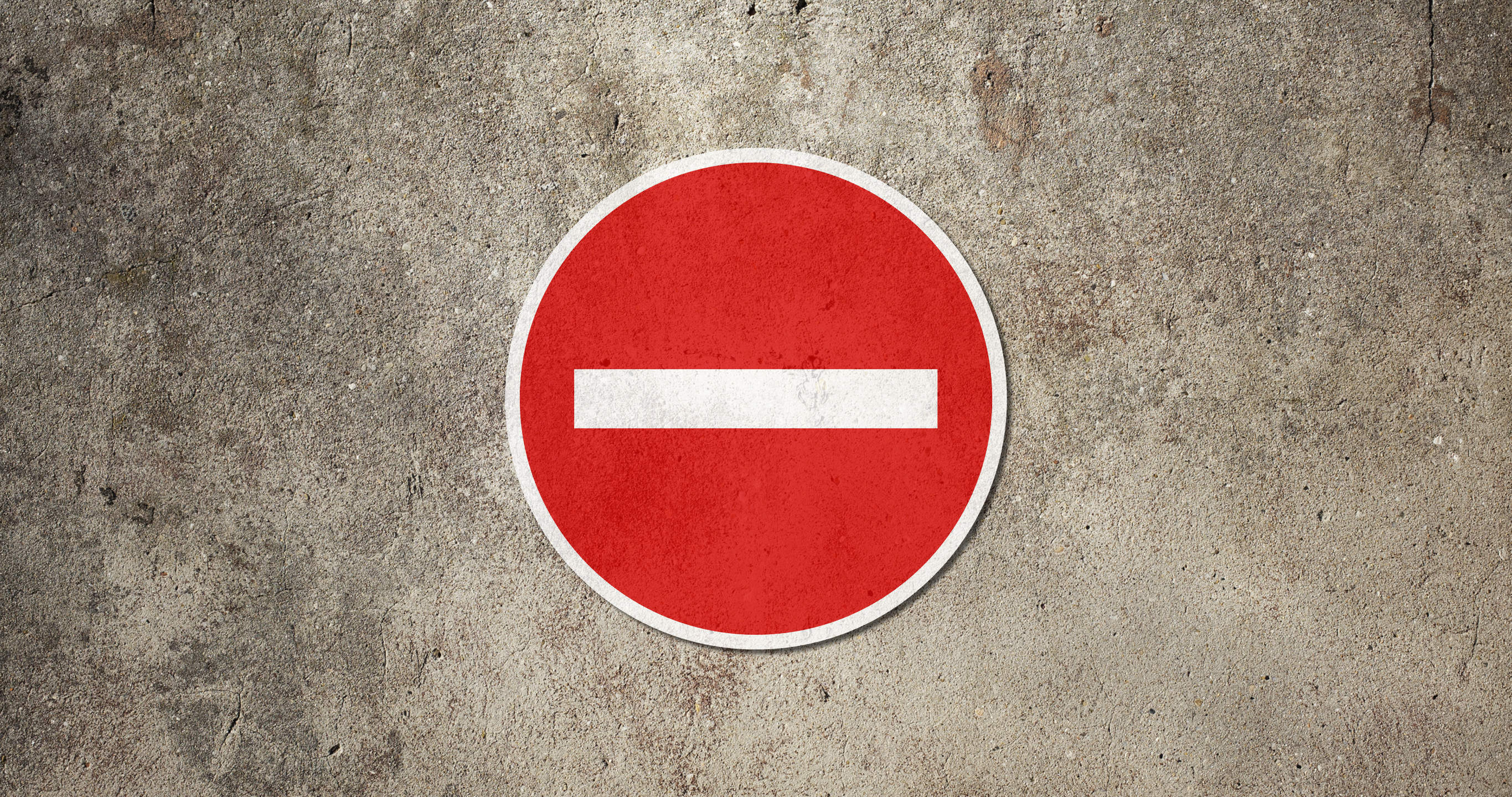 A. INTRODUCTION:You might look at a card and wonder “Why doesn’t this card see play?”. Well today I will be talking about the myriad of reasons that causes cards to dust away in your binders. Keep in mind that all of these categories apply to high level competitive Standard play, not casual decks brewed up for some kitchen table awesomeness, league decks, fun themed ones, or what have you.
1. COST:So cost can mean three different things:
Cards with high costs generally scale with power relative to how demanding they are to play. Some of them however fly too close to the sun and end up unplayable for either the amount of value they ultimately give you, or end up just being too restrictive to deck building.

Let’s take REBELLION LEADER. You have to ask yourself is it worth paying 4 resources for a card that only goes on unique and red character that are also hero, and our pool of cards we can play this on plummets with each of those requirements. So to do this we need a deck that can spare 4 resources in a turn, so all eyes are on vehicle lists for that. 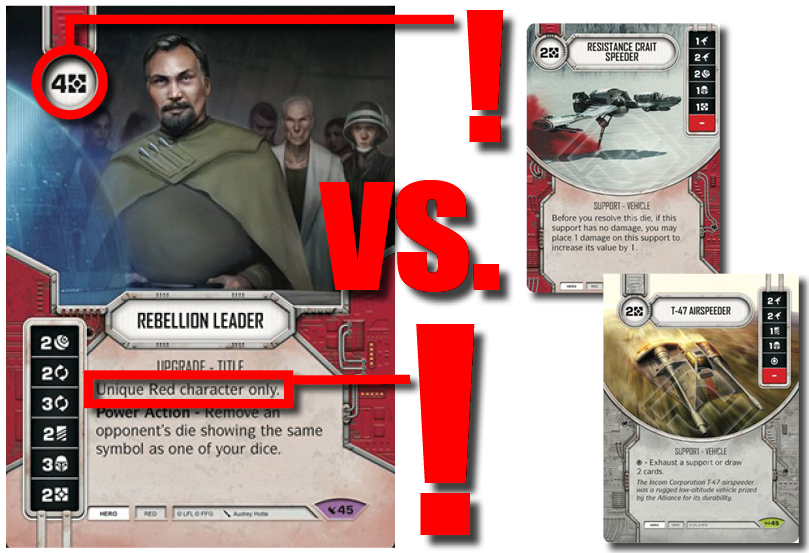 And hey they normally run Rose, who can be (and I suppose actually is) a Rebellion Leader. However, it is much more valuable for those decks to play a couple of 2 drop vehicles or maybe even a 3 drop and just hold the resource as once you lose Rose you also lose the 4 resources you put into the Rebellion Leader.

Alright, now take the MILLENIUM FALCON. It costs 5 resources and in reality that price is just too high. You are going to miss a lot of chances to play things while building up 5 resources just to get a single die on the board. 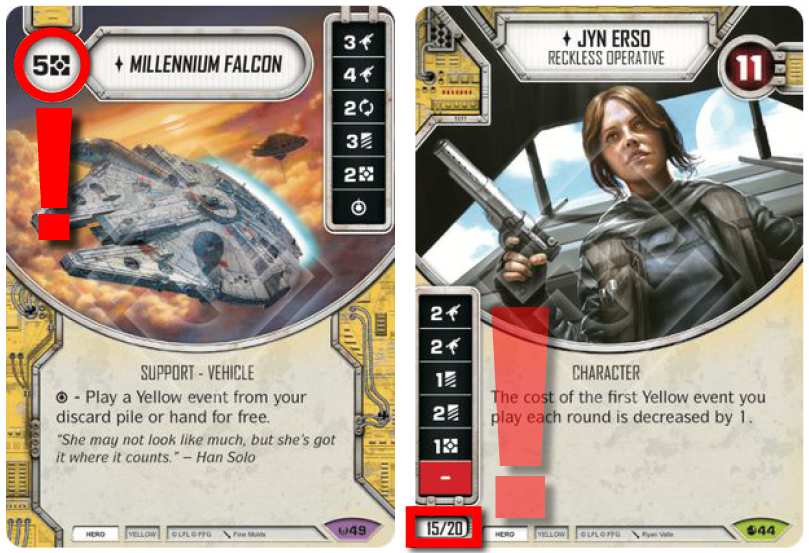 The same goes for characters here. The original JYN ERSO actually isn’t a terrible card except for that awful 20 point cost. It basically deprives her of any decent pairing. IG-88, MACE WINDU (man that guy needs a better printing), GRAND INQUISITOR, DIRECTOR KRENNIC, I could really keep going.

None of those characters are terrible on the surface, but when they get to be so expensive they have to be run with very subpar partners they just end up getting shoved to the wayside. 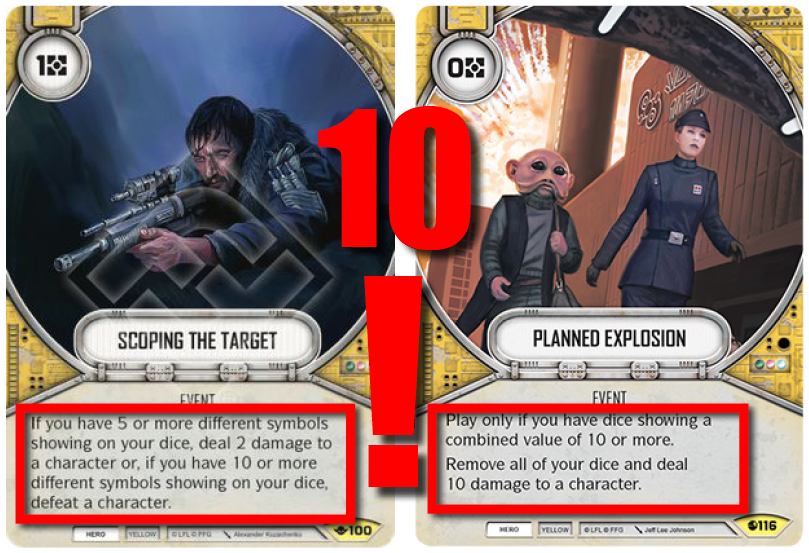 There are a few select cards that don’t see play due to their play restrictions. SCOPING THE TARGETis solid example of this. For just 1 resource you can deal 10 damage! However, the requirement of needing 10 different symbols makes this card essentially unplayable. PLANNED EXPLOSION is also in the same camp, granted it’s not terribly hard to so much meet its requirement, as it is hard for the dice you amass to not get removed, therefore denying the cost to play.

TWIN SHADOWS is strictly better than ENTANGLE for yellow villain, a card that seems plenty of play. Oh except its spot requirement. Needing to spot two characters with the same title make it essentially unplayable. 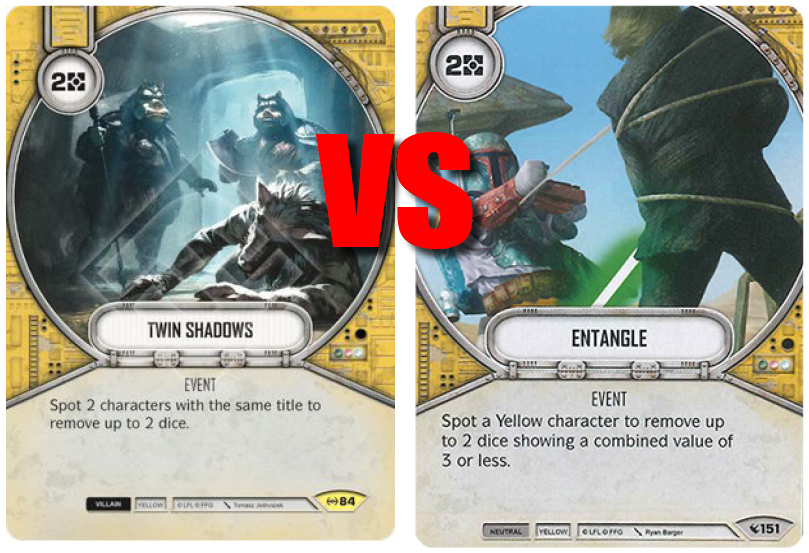 Lastly, the rarest of the cost inhibitors are the cards that are too expensive to resolve. ROCKET LAUNCHER has to be the best example by far. At a glance a card that does a ton of single target damage, can do solid AOE damage, and that can even blow up vehicles seems like it should be a staple in today’s meta, right?! 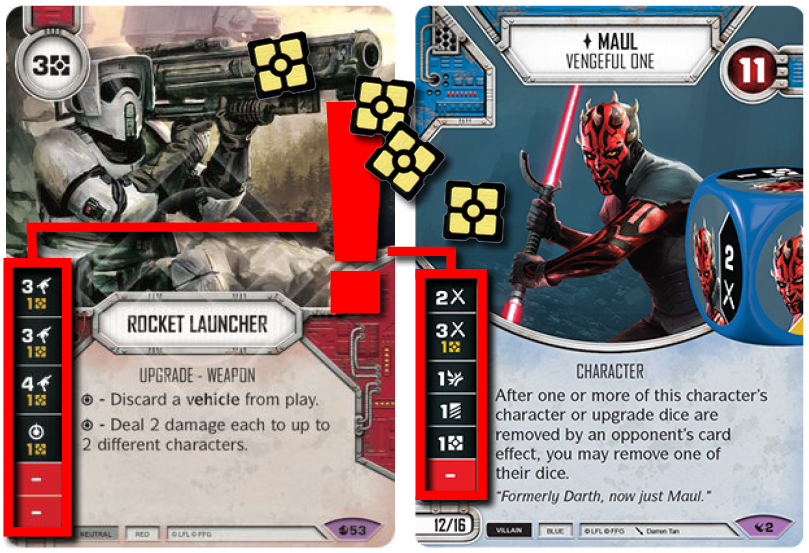 The Rocket Launcher's problem however is that it costs a resource every time you want to resolve that and before you know it this 3 cost upgrade has had 6 resources put through it and we have completely lost price efficiency. This isn’t to mention that many decks just really can’t afford to set aside one resource every turn. Pay sides gate keep a lot of characters too. Maul’s 3 Melee damage for a resource side really kills him, and there are a whole host of other characters who don’t see play for this exact reason.
2. TEMPO:Ever wonder why you never see Kylo2 decks playing his own Starfighter or why Cassian/Poe2 doesn’t play Resistance Crait Speeder? Sometimes a card is strong by its own merits, but doesn’t fit the pacing of every deck that could play it.

Vehicles and most supports (R2-D2 and C-3PO occasionally skirt by as an exception) are the classic example of this. Fast aggressive decks just don’t have the time to spend several actions playing and activating supports, they would much rather roll in 3+ dice in one action by activating a character and get to claiming that much sooner. On the other hand you have cards like Maz’ Vault or Truce which you rarely see slower decks playing. That is because slower decks care far less about how fast they go, and would rather just find the time to grab a resource the old fashioned way, rather than give their opponent a resource for free in the process.
3. META:There are several cards in our card pool that are actually fine by all other accounts, but don’t quite fit into the current meta. Two good examples are BD-1 CUTTER VIBRO-AX and HANDCRAFTED LIGHT BOW. 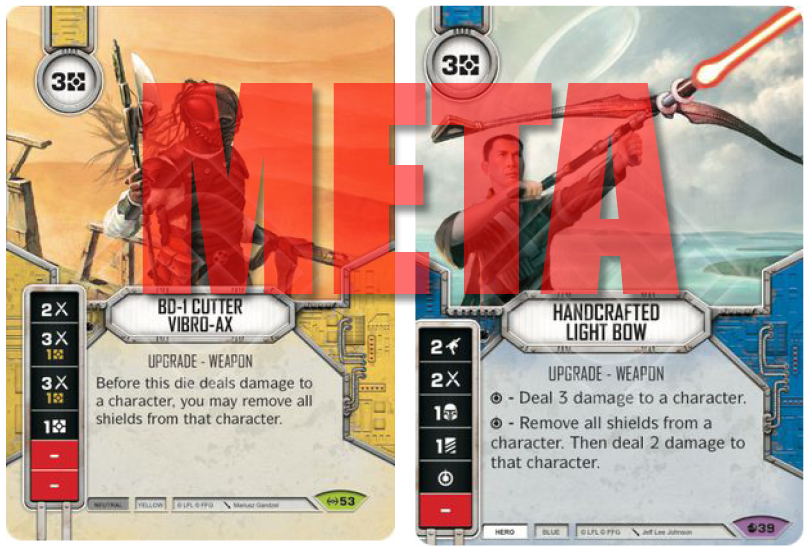 Those two cards have shined in the past, particularly Light Bow, but really only when they would be seeing enough shields in a given field to justify running them. Let’s look at the Light Bow. Against shielded characters it can do a whopping 5 damage! However, in a field of shield-less characters it is far more likely to do 2-3 damage, at which point it starts to get outshone by cards like Heirloom Lightsaber which can also do 2-3 damage but have Redeploy and a better action economy by not having 3 different damage symbols.

FORCE WAVE is another good example of a card like this. Force Wave representing 6 damage to characters makes it one of the most threatening die in the game, even with its pay side. However, if you can’t get the full value by playing against 3wide character decks it has to be left on the shelf, like it was during most of the Legacies meta.
4. POWER LEVEL:
Let’s be honest, some cards are just bad. Just look at ICESTORM, that card is terrible! To me the text on that card says “Discard this card to reroll your dice”. Developers frequently print bad cards to “help players learn” by showing them what is powerful or not, and that’s fine but to no one’s surprise those cards obviously don’t see play. 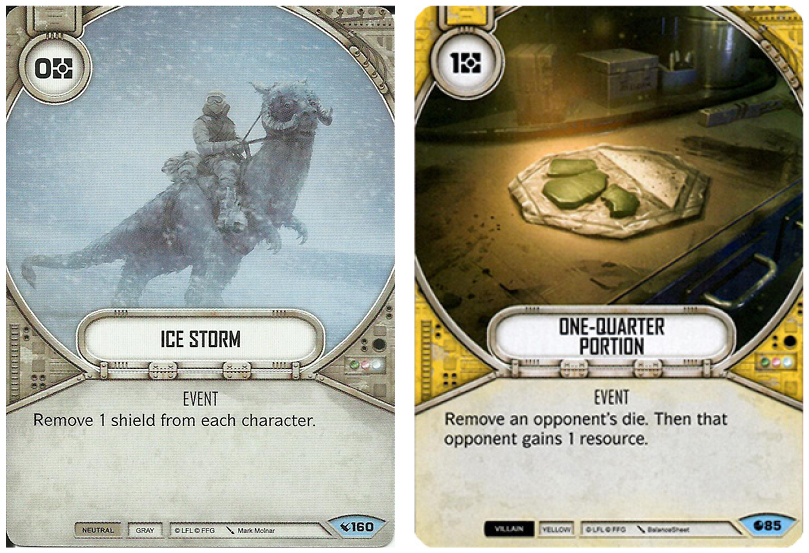 It does happen at times that a card starts out great, but is eventually surpassed by stronger more recently printed options. ONE-QUARTER PORTION is good example of this, the card used to see play, but removal has evolved past it in power level. 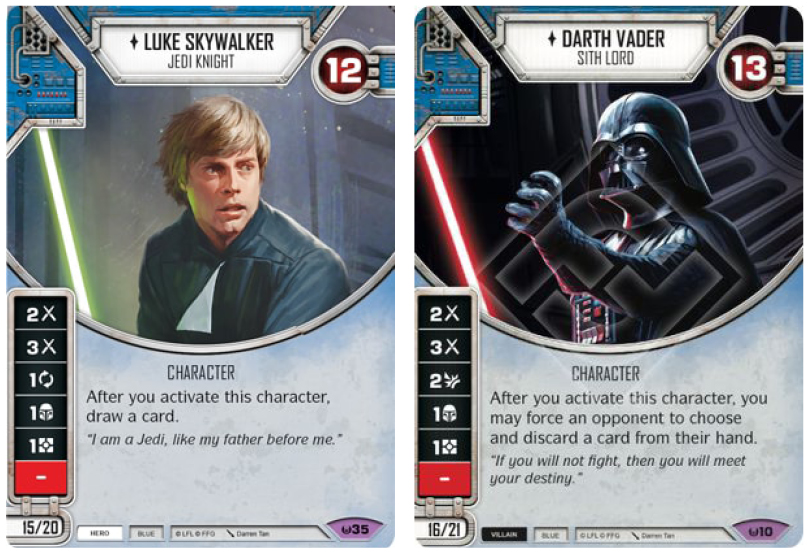 Characters also obviously suffer from power level issues. I’m pretty sure MON MOTHMA has never seen competitive play, and old power houses like Awakenings LUKE SKYWALKER and DARTH VADER just simply aren’t viable compared to what else could be run in their stead.
5. EFFICIENCY:How about a card like ISOLATION? At NOVA 2018 there was exactly 1 copy of Isolation being run. In events months back that would be insanity, but these days in wasn’t exactly eyebrow raising. Isolation’s problem is that it is a 1 for 1 that costs a resource. Now being a 1 for 1 doesn’t necessarily make a card obsolete, Hidden Motive sees plenty of play as a 1 for 1, but Hidden Motive does not have a Spot requirement and is also free to play.

At the same price as Isolation you have Overconfidence which still removes a die, but also messes with another die. If you want to pay one more resource than Isolation you can start removing several dice with cards like Mind Trick.

Isolation is just too fair, and therefore not good enough to see play in a meta with such a dense card pool. Admittedly this category is pretty similar to cost, but to me the difference is we are not being gatekept by resources, we are simply running cards that do more for the same amount of resources.
6. NO HOME!
Occasionally an extremely powerful card comes along that simply doesn’t have a deck it can be played in. DELVE is a great example of this. Delve was busted the second it was printed, but it did not have the critical mass of 5+ drops it needed in villain to be played yet.

Then Planetary Bombardment was printed and this card skyrockets to being a staple a few tier 1 decks. CLOSE QUARTERS ASSAULT is another great example of an absolutely monster of a power card that seemingly lacked a home. CQA sat around for several sets, but it was not until Legacies that the character sets needed for it to be consistent enough to be played came about. Boba Fett, Aayla, Kylo2, Rey2, were all crucial pieces that this card needed before it could take off.

Many Characters fall victim to having no home as well. After Unkar Plutt was nerfed during Empire at War, Thrawn no longer had a viable partner and had to sit on the sidelines until Mother Talzin and later Snoke were printed.

Now no one will call Thrawn’s inherent power into question, but he simply did not have a good pairing, and was being outshone by worse characters who were able to make up the slack by having decent partners.
7. NARROWNESS OF APPLICATION:Let’s have a look at both our current meta and a card like QUELL. Quell could easily buy you anywhere from 6 to 10 health and remove 2-3 dice in a single turn. The problem however is what it is doing the rest of the time… which is nothing. Sometimes a card’s application is too narrow for it to see play. 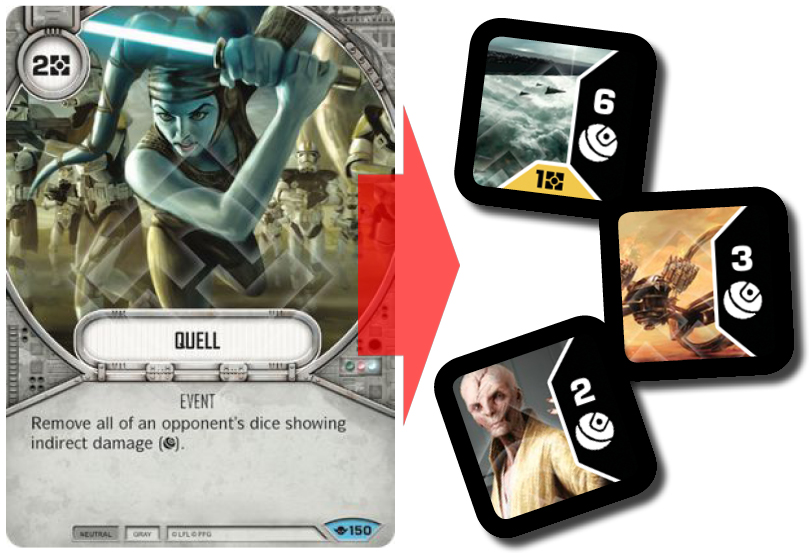 In fact, most of Quell’s cousins (Dodge, Dive, Block, and Defend) all suffer from being strong but too narrow to see any sort of consistent play. No Cheating is another great example of a card that is just too narrow to see play. You will probably find most “hate” cards fall into this bracket. For the uninitiated a “hate” card is essentially a card that is very good at dealing with one specific thing, but does nothing to anything else.
8. SURROUNDING COLOR/ALIGNMENT SCHEME:This category is always a serious bummer, but it has definitely happened in the past. This is definitely a related category to “No home”, but I would like to make the distinction that while the “No home” category means that a card just can’t really do anything meaningful yet, cards here definitely can do something but have a poor supporting cast built around them and end up making it so that they never see play.

Red Hero cards have been plagued in the past for this reason. Cards like Field Medic saw low play in Legacies, not because it was bad, but because the only good Red Hero decks were vehicles and unfortunately that is about the only archetype that overly doesn’t care about healing its characters. Any other red hero deck would have played this card, but they didn’t exist at high tier play!
9. UNDISCOVERED!Ah yes the last reason a card doesn’t see play, and every Brewers delight. The coveted undiscovered card. There is a very real chance that a card is not seeing play for well… no good reason at all!

Maybe YOU will be the one to introduce a card into the meta! Let us know which cards you think could be the next hidden gems!

Written by
Lake Quitt aka Craw