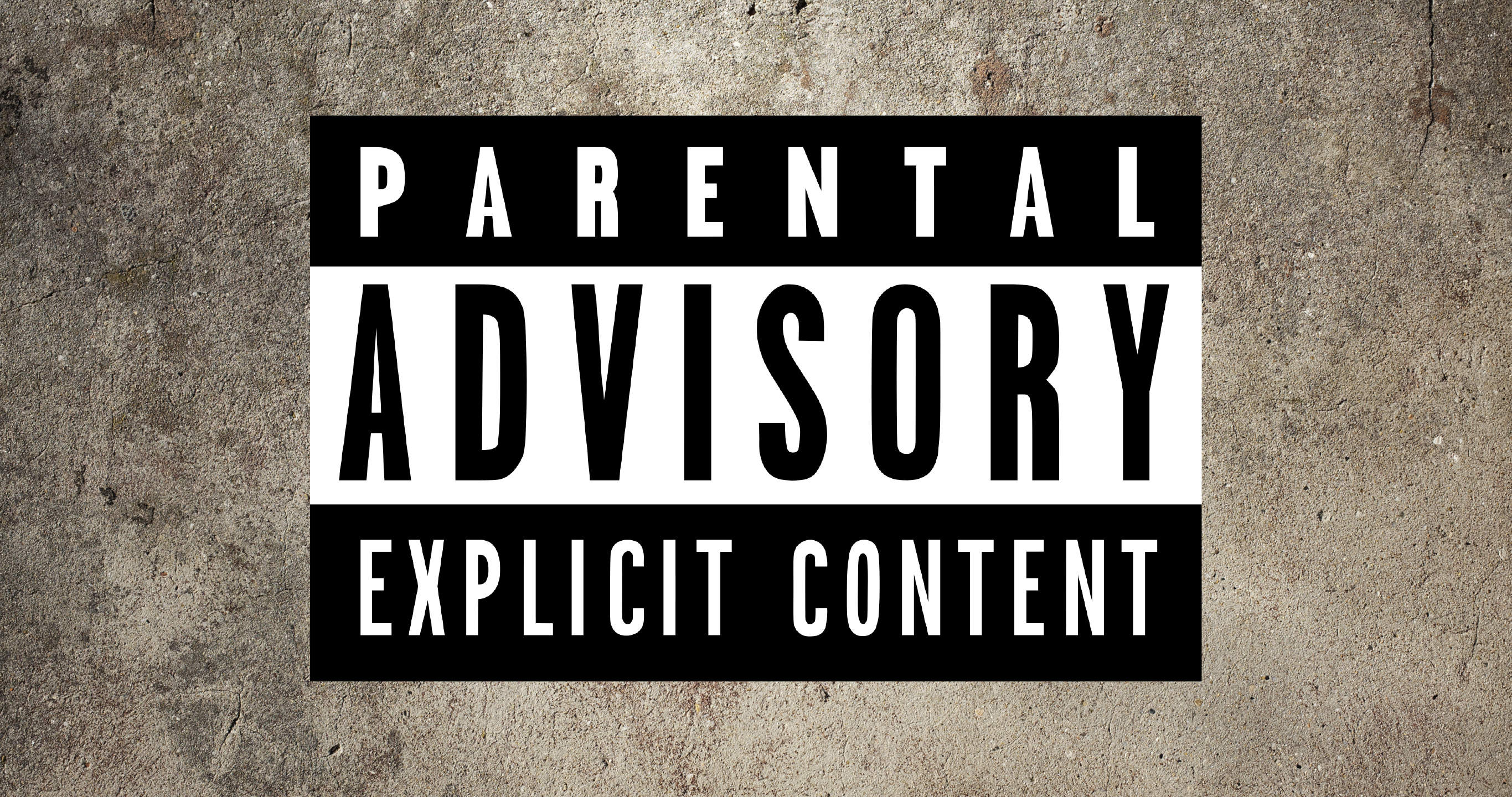 1. GENERAL COMMENTS:
As we restart the Regional Season after the Holidays, things might have settled a bit with players having had the chance to analyse the results of 2018. It was pretty clear after the Holocron update that there were a new king in town and his name was Darth Vader - Terror to Behold!

In this article I'll be analysing the data from the Perth Regionals (Australia), Texas Regionals (US), Nebraska Regionals (US) and Utah Regionals (US). There were more Regionals held across the US, but at the time of writing I do not have access to that data.

This is just a short update written while I enjoy my morning coffee! I might when I get the data in do a proper write-up ... calm down ... it's Sunday morning!

ALSO ... I've recently had problems with people's brittle eyes and minds ... so, I'd like you to know that this article contains some semi-nudity and maybe even some foul language. Ask your parents if you are allowed to read the article!
2. DID FFG GET IT RIGHT? 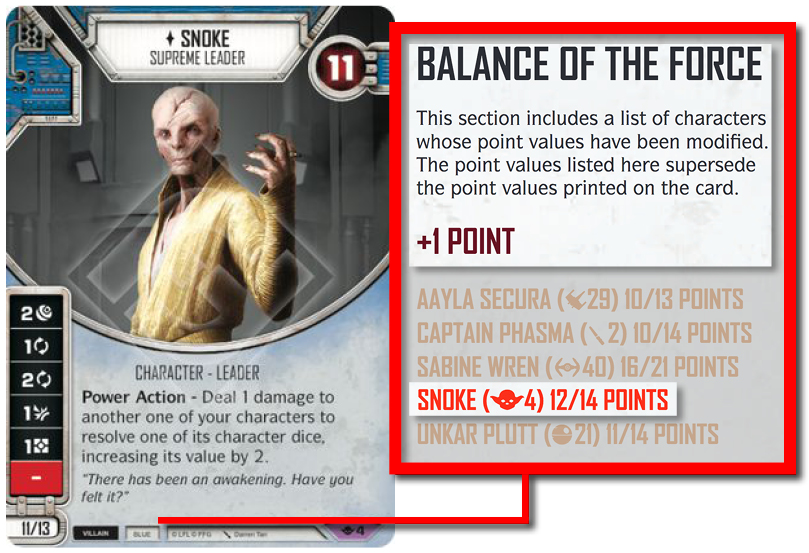 In the YOUR Destiny Podcast Episode 29, Mads Utzon and I were talking about the Balance of the Force and how we thought they had gone too easy on Snoke, so it was going to be interesting to see how the community in general reacted to the points increase! And early results seem to indicate that FFG actually got it right - at least players has responded in kind and Snoke is really nowhere to be seen in the top decks. Well ... there were a few, like eSnoke/eDJ, but those were the rare exceptions and Thrawn/Snoke seems to be all but dead ... 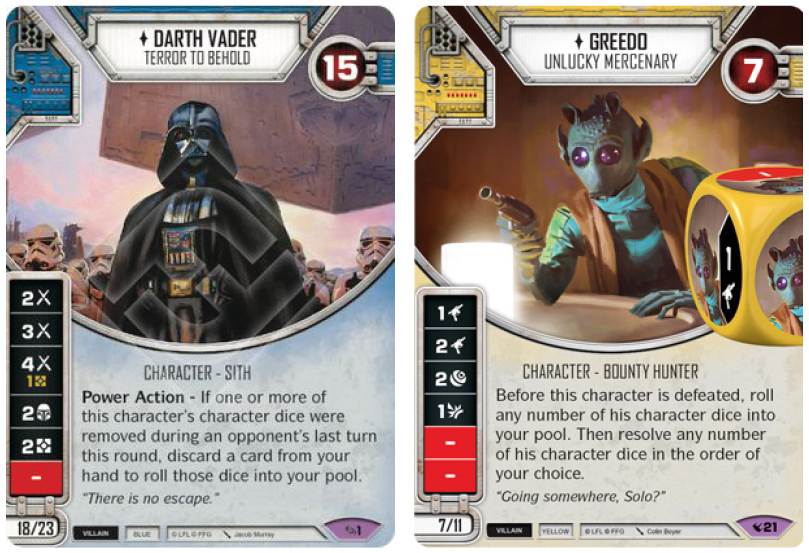 While Snoke - Supreme Leader is in the wind, all praise our new Overlord and Terror to Behold! Darth Vader has made it into the competitive scene and made it big time! It looks at the moment like you either join the dark disciples and play Vader or you find a way to consistently beat him!

The latest Holocron also curbed the power of resetting FAT Vehicles and that also looked to have helped with eCiena/eBeckett being the only ones shaking their money making booties at the top tables. 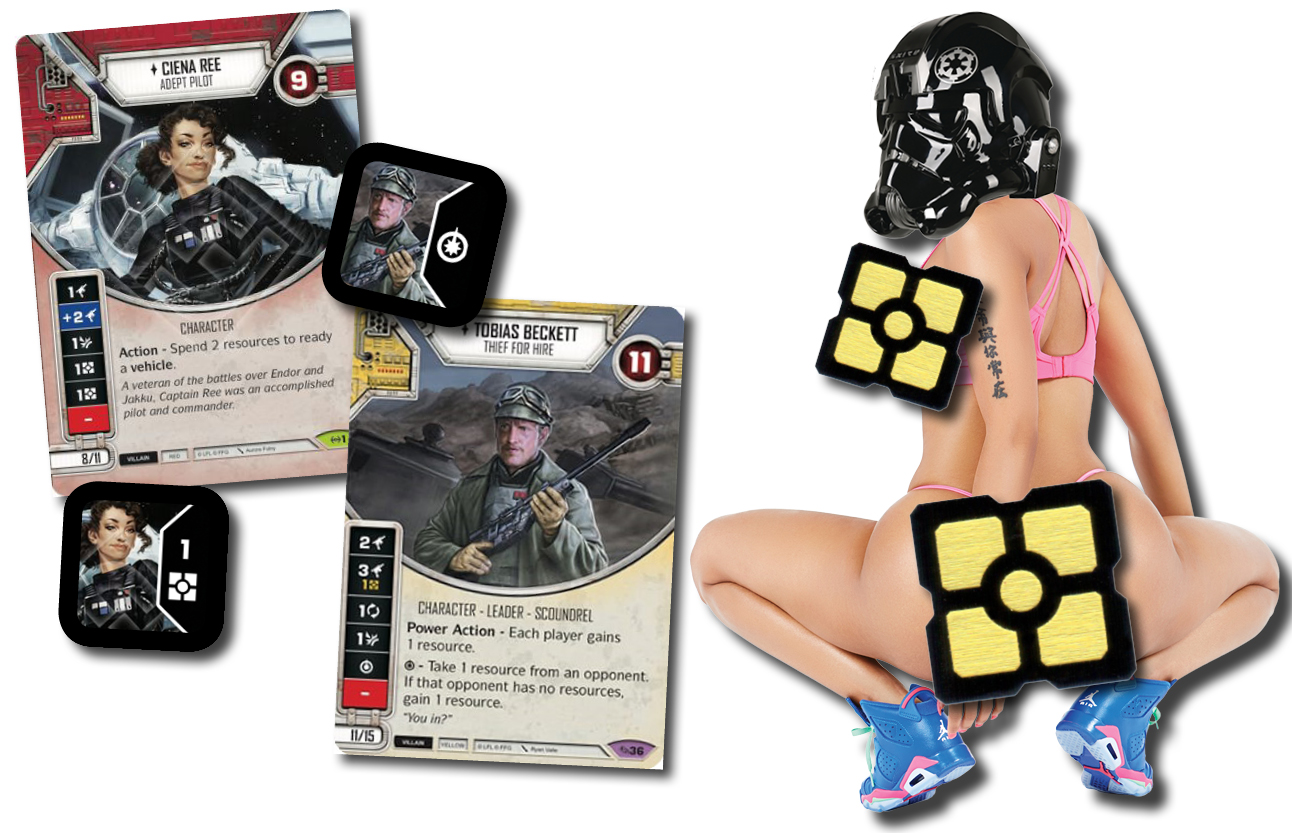 3. IF YOU CAN'T DEFEAT THEM ...
It looks like most players trying to figure out how to defeat eVader/x either:
Coercion into a Price of Failure is a beautiful way to either stop Vader dead in his tracks (if Vader is the only character remaining) or force him into defeating his sidekick before reaping the benefits of it. I guess coercing a Sith Lord feels pretty good. 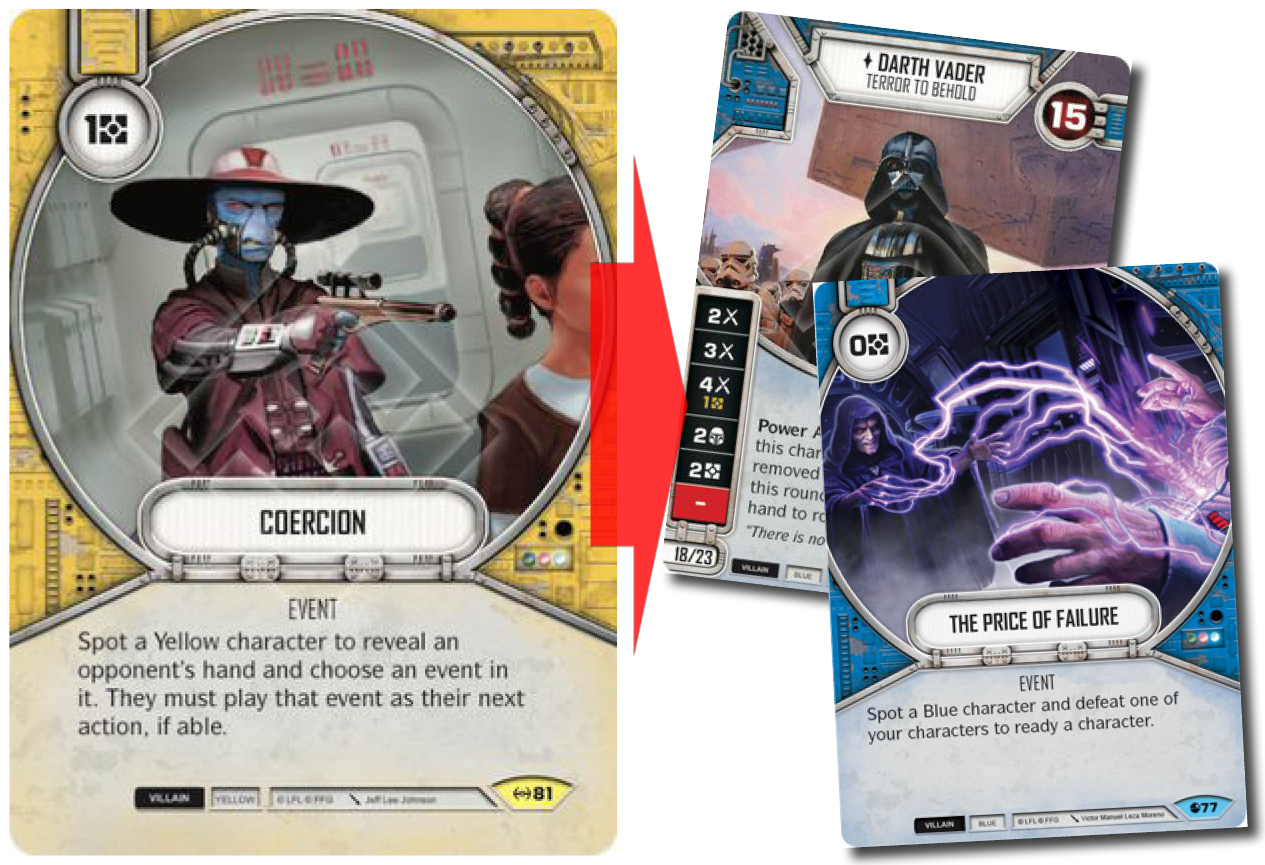 Players have been asking themselves for a while what happened to mill decks?! And it looks like that particular archetype could be making a comeback pretty soon! They were out this weekend, although not in force, with eYoda/eLeia2 and eYoda/Cassian/Anakin seemingly the two most prevalent mill character teams. Hand- and/or deck control/disruption is an incredibly powerful tool against Vader and also has fairly favourable match-ups against most other decks.

Starting the game with Fortify makes it a 22hp character team, which is a bit on the low side for a mill deck, but you can run Retreats in place of Hyperspace Jumps and if you bring Occupied City as your Battlefield chances are you'll get another 2 Shields after the initiative roll-off.

I don't have access to any of the eYoda/eLeia2 decks that were piloted at the Regionals, but this "stock list" was posted a couple of weeks ago by the guys from T3 Gaming, and looks more or less similar to what I'd imagine bringing in a blue/red mill deck (with some changes). 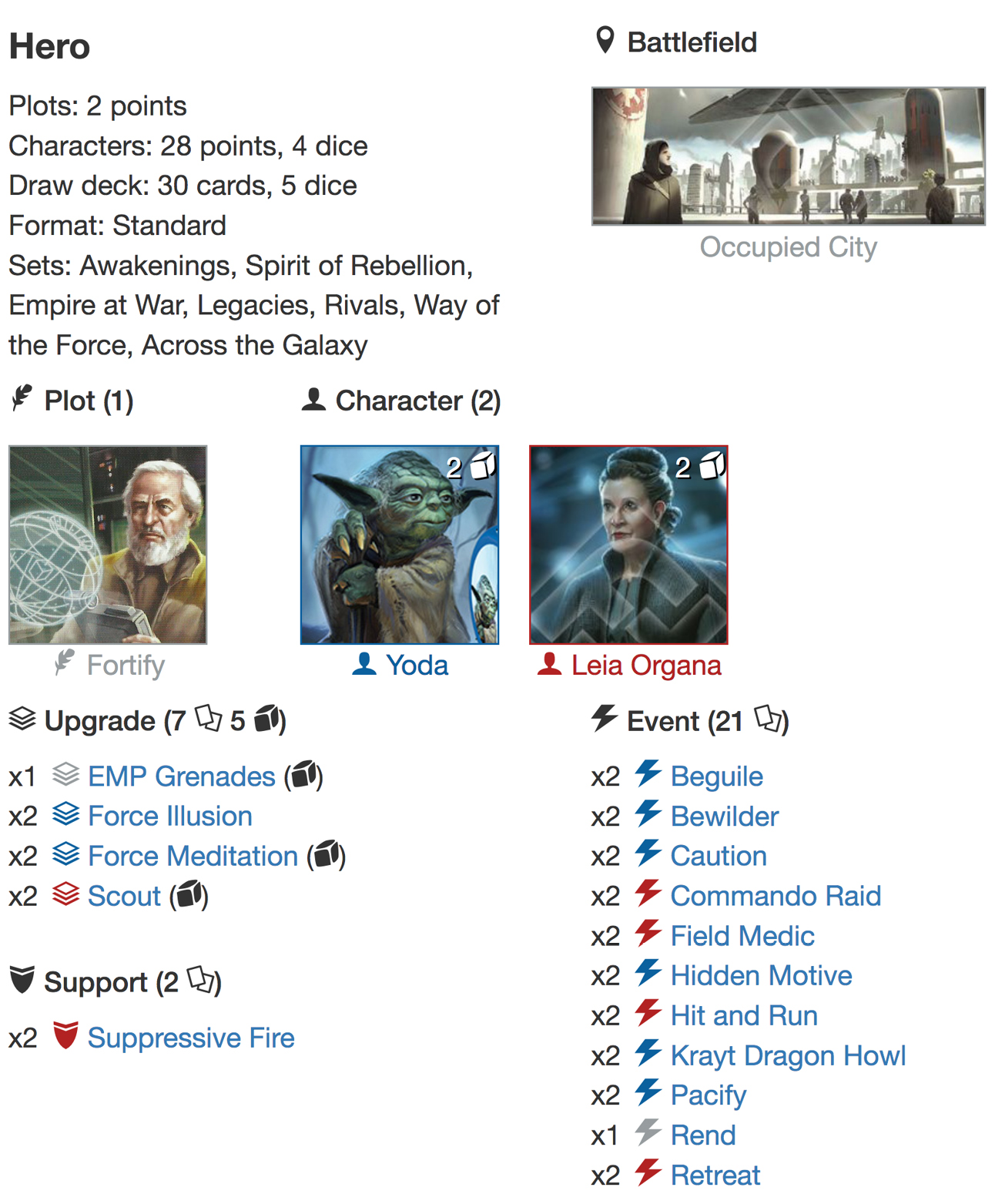 Both cards like Suppressive Fire and Bewilder look like hardcore techs against Darth Vader while the EMP Grenades offer some protection against FAT Vehicle decks.

I do think you need to include cards like Force Jump against a meta that's heavily leaning towards BIG damage sides, even if it can't be used against Vader's Fist.

There's no doubt, if you ever were in doubt, that you'll need to train against the mill match-up for any Regional event you will be going to! People will be bringing it ... Mads Utzon wrote this article on "How To Defeat Mill Decks" a while ago, but it is still as relevant as ever. Read it! It's going to be worth your time!
4. VADER'S FIST:Yep ... You got! It's still good! Some might even say that 5 resources for a support that's VERY difficult to remove from play, can resolve 3 times when its played and 2 times any round after that is a tad too good. 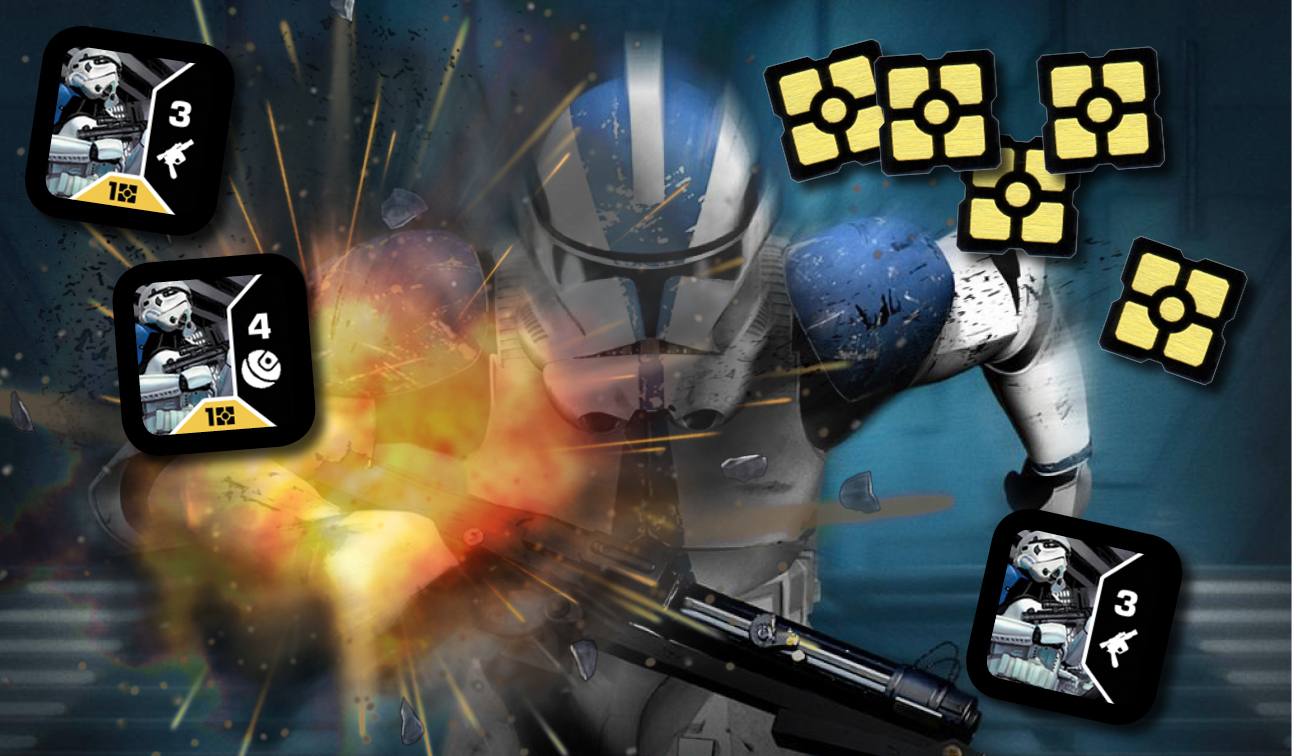 HonestlySarcastc of the Hyperloops and Agent of Zion from the Artificery Crew who were commentating on the Golden Dice Podcast Stream were going NUTS over sequencing with Vader's Fist! So, just to make sure!

Jack Broomell from Golden Dice Podcast brought a character pairing, that we've also been fiddling around with amongst the crew members of YOUR Destiny: Kit Fisto and Aayla Secura. Apparently this particular pairing is referred to as Fish'n'Sticks?

While looking for an image to use for the article I came across this ... 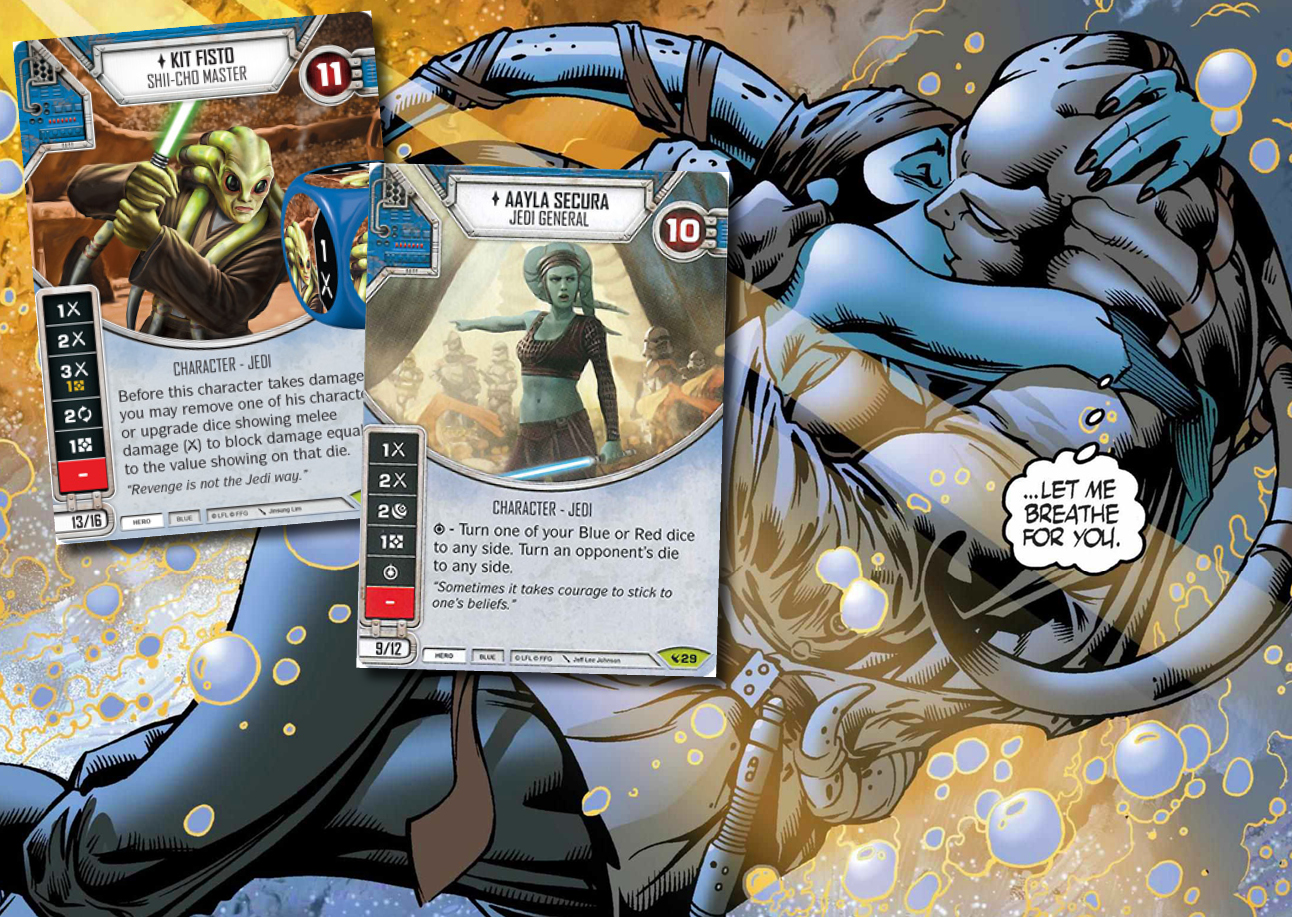 Jack went 5-2 at the Regional event and I'm pretty convinced we'll see a lot more of this character pairing going forward. They have loads of great tools at their disposal, apart from helping each other breathing. Pseudo-mitigation and lots of damage sides! It's a decent Close Quarters Assault deck and some tanky midrange deck might exactly be the right place to be at the moment. The deck also lends itself well to Force Speed and All In plays.

While blue heroes might not have dominated the meta since eRey2/eAayla they've never really been out completely and as some of you might remember I was defeated in the finals of Nordics 2018 by eYoda/eLuke3.

I've put this list together which looks like a good starting point for your testing with eKit/eAayla (if you also want to breathe life in them). 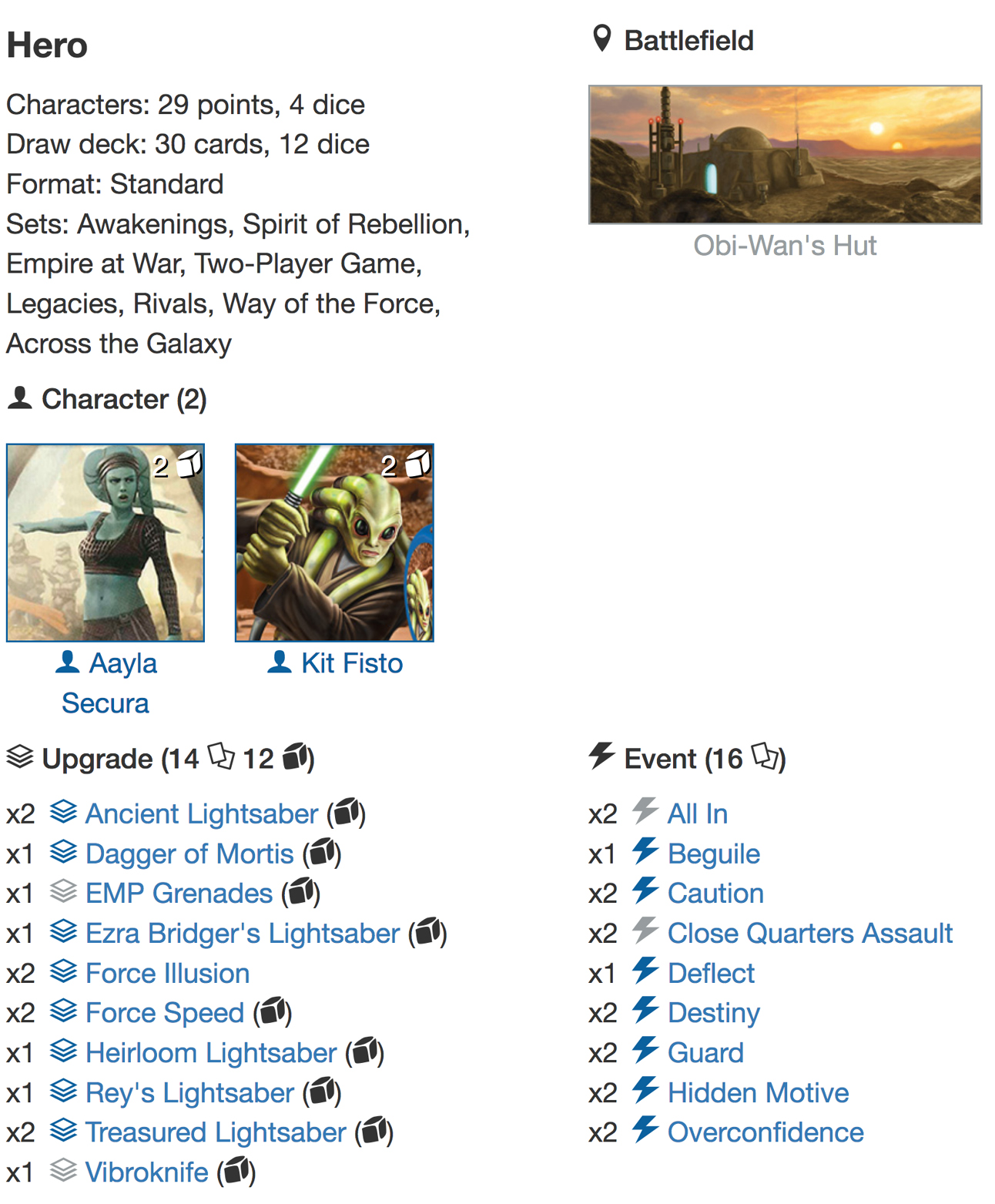 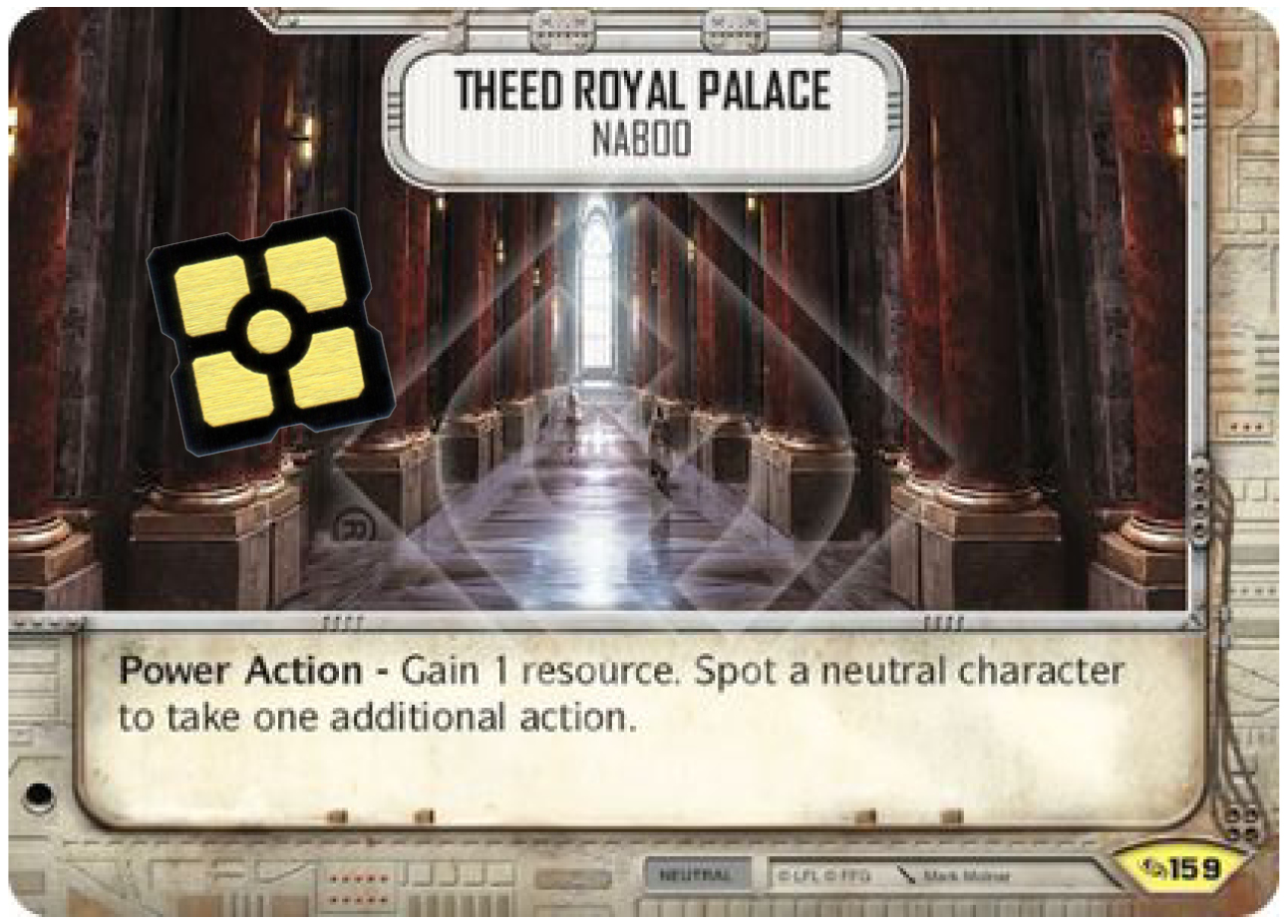 Theed Royal Palace is here, there and everywhere, and it's pretty understandable. It's an incredibly powerful Battlefield and because it's ability is not claim dependent, it's essentially like starting with Profitable Connections, round 1, and if you spot a neutral character and can maintain control of the battlefield, a Truce every round after. It's crazy good.
7. FAT VEHICLES?What happened to FAT vehicle lists? Well ... I guess players are scared of the anti-vehicle tech floating around, and who knows if we are going to see more players revert to standard vehicle decks out of fear of losing their majestic decked out Shadow Caster or Firespray-31 to a Surgical Strike, EMP Grenades, or even a Vandalize which are everywhere!

8. COMING TO GET 'YA:
Han Solo and Qi'Ra are coming for you! The pairing are getting more popular and it might be advisable to get more games in against this aggro 24hp character team!

They do know how to dish it out ... even if I'm not completely convinced of their merits and prefer a true aggro team like ePoe2/eHan3. But I've been proven wrong before ... a LOT actually!

PATREON SUPPORT:As a Patron you support the YOUR Destiny website, podcast and YouTube Channel, and you help us to continue providing content for Star Wars Destiny. We are a dedicated Destiny website and release articles almost daily. As Patron you also get early access to most articles, including several yet unreleased deck analyses, and can enter our Patron only Discord Channel. Advanced and Expert tier patrons get access to exclusive training and test videos. Thank you for your consideration!