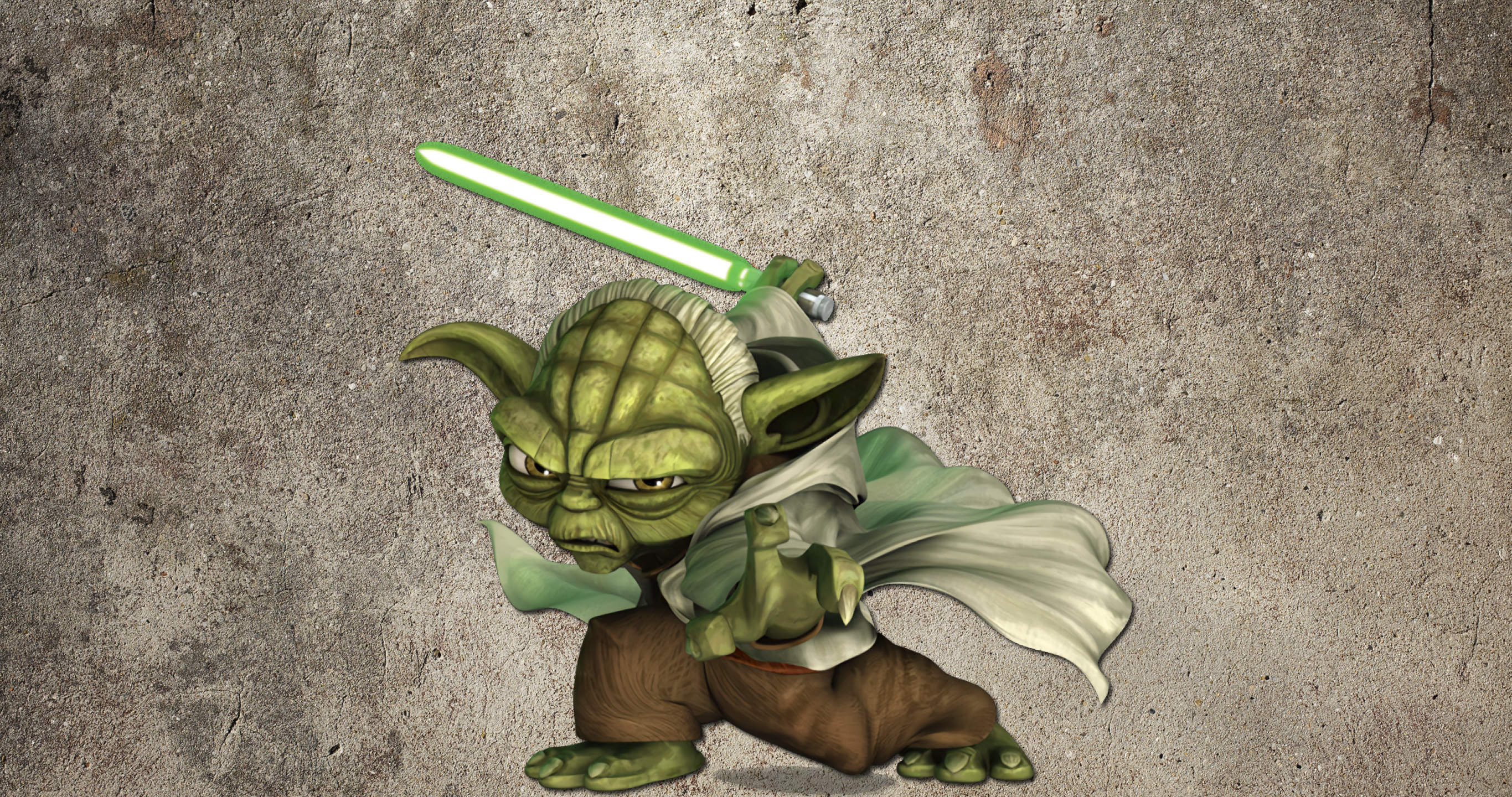 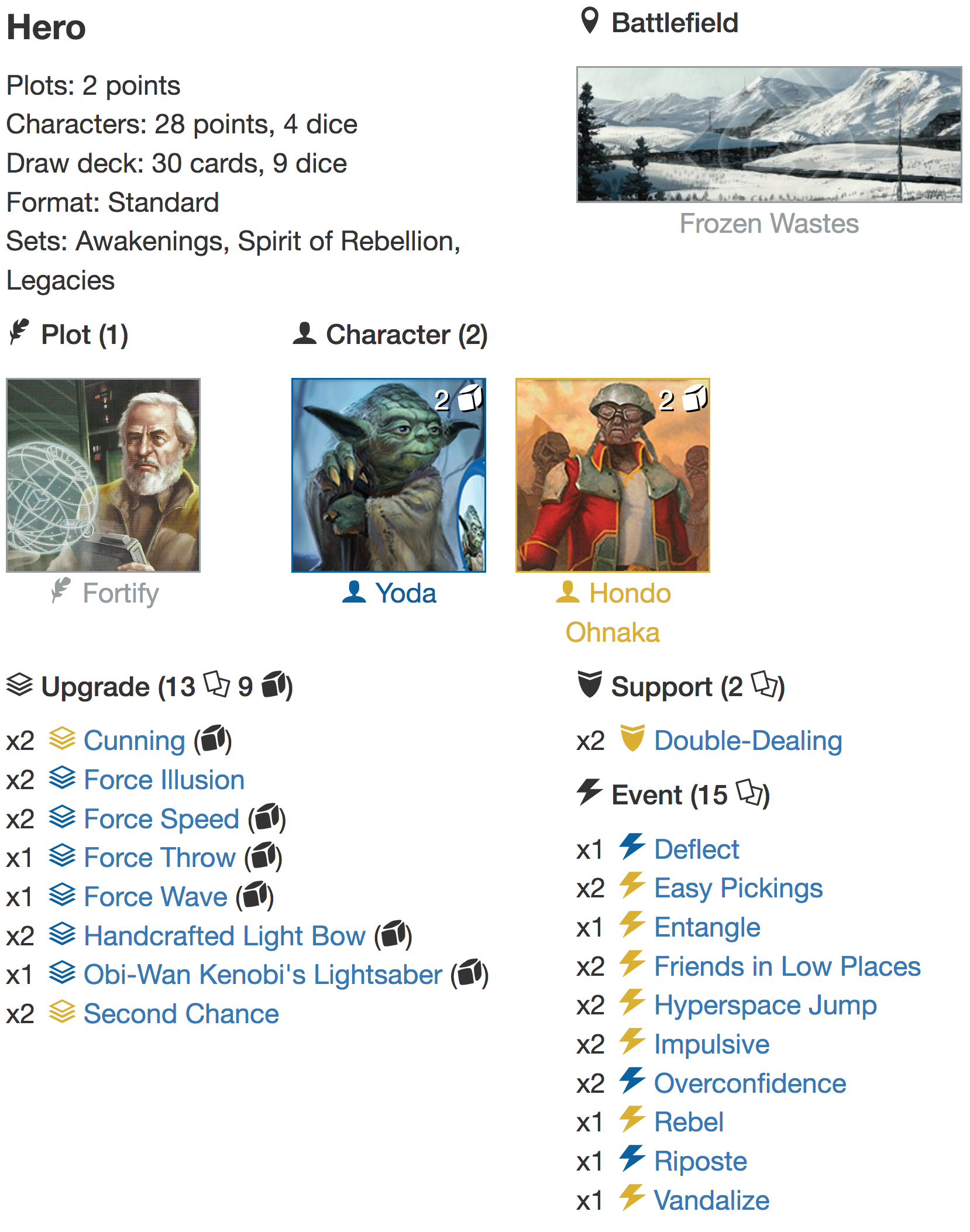 1. GENERAL COMMENTS:
In a meta where Snoke has been reigning supremely and claiming top spots at both the UK, US and German Nationals in the span of just two short weeks, it was a fan favorite of the Legacies meta that would finally end the Nationals dominance of Snoke.

With Yoda/Hondo piloted by Franck E. aka Fresck taking down the 46-man Belgian Nationals 2018, a few eyebrows where raised, and there are some questions that need to be answered! No-one had expected a fragile two character build to be able to do well in a meta that can push through vast amounts of damage like never before (I've played games where 20+ damage has been dealt in a single round!). The US Nationals was an indication that two character builds might not be dead altogether as Kylo/Snoke and Thrawn/Snoke made a strong showing at the event, but both of those character pairings are very different beasts altogether from the glass like Yoda/Hondo team. It's not only 23hp vs. 20hp (although functionally 21hp because of Fortify), but it's also the apparent inherent weaknesses of the two characters.

During Worlds 2018, the hey day of middle-middle aggro decks, Yoda/Hondo were made to suffer against both Rey/Aayla and Kylo/Anakin, who could either tank through most 2 character decks or overpower them by virtue of Close Quarters Assault, high quality upgrade dice and sheer brute force, but the meta might just be favorable towards the little green goblin and his respectable partner!

Jonathan Lannoy did an excellent write-up of the event with some nice statistics as well, so be sure to check that one out as well!
2.CHARACTER:

YODA and HONDO is an odd character pairing. In the current meta they actually seem inherently stronger than in the Legacies meta. The absence of Resource sides is outweighed by Yoda's crazy Special as well as Hondo's Special which in some ways functionally can serve as a pseudo-resource side, in particular in a meta where everyone is rife with resources (unfortunately most of the time on your opponent's terms rather than your own). Also the Disrupt sides on both Yoda and Hondo are arguably better sides now than previously (and we saw Franck E. use the Disrupts to great effect in the Finals at the Belgian Nationals), and the same can be said about the Discard sides, which more often than not is worth resolving!

On the downside Hondo's Special has become worse since resources are found en masse now as opposed to previously where it was considered such a scarce commodity (i.e. see Mads Utzon's recent article on "Cards you should play in the current meta") and it leaves both of your characters in a precarious situation with no inherent damage sides and very much dependent on upgrade dice to put in some hard work.

It's still, and right now by a wide margin, the fastest deck in the format, and the synergies are there for everyone to see, yet it is at first glance inherently weak, which also made many competitive players abandon the deck, and its strength deteriorates fast as soon as you lose your first character.

You'll most likely be looking at an effective starting health of 23hp as most opponents will be unlikely to choose your Battlefield: Frozen Wastes, it really only benefits you (and maybe Cad Bane/Snoke decks), and you'll in turn choose your opponent's battlefield, since you will be switching it the first time you Hyperspace Jump.

In a meta where slow is the new black, Yoda/Hondo goes faster, and if you can manage to protect them while halting the tide of supports that'll be thrown at you, well ...
3. UPGRADES & SUPPORTS:This deck is low on upgrades that can further the win condition. Counting in the REBEL as an upgrade (because you can snatch upgrades from your discard pile), there are essentially only 8 upgrades that directly deals damage, which amounts to just 82% chance of drawing at least one in your initial pre-mulligan draw (which in reality is just 76% because you can't use Rebel in the initial draw).

To the great respect and credit of Franck E., newly crowned Belgian Champion, he managed to make the best of every single upgrade he had in play, including a Game 1 in the Final where he held Thrawn/Snoke at bay with just 2 upgrades (topped off with Force Speeds, etc.).

FORCE SPEEDS helps set up all the shenanigans of the deck, it's not about speed, but about the protection that the action cheating offers to the few upgrade dice that are so vital to this deck, it can essentially set in motion an avalanche of Specials that might not deal a whole lot of damage, but can pick off soft targets with ease and in a few rounds of sustained bombardment even high health characters with no to little chance of mitigating the dice.

Both FORCE THROW and FORCE WAVE are meta calls and both are great against the current crop of decks that are dominating the competitive scene - even the two Disrupt sides of the Force Throw, traditionally considered the weakest sides of the card, looks pretty decent. I was surprised to only see one copy of Force Wave included in the deck as it seems so incredibly powerful at the moment, but I assume it is an attempt at reducing the number of Blue Character only upgrades. 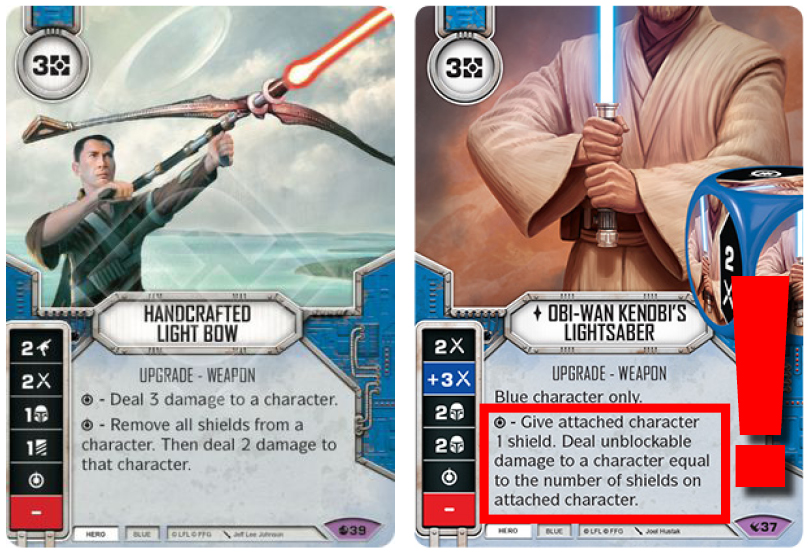 HANDCRAFTED LIGHT BOW is extremely good with Yoda, and allows for some continues damage in a deck that can struggle a bit in the department. The ceiling on Light Bow is pretty bonkers!

OBI-WAN KENOBI'S LIGHTSABER really only has one side you want to hit, Special, although the damage sides or the Shield sides can be useful in a pinch. The ability to deal unblockable damage, bypassing Shields and Force Illusions can be pretty massive, and in conjunction with Yoda Specials are almost ensured to deal 3 unblockable damage most of the time. Used in conjunction with a CUNNING Special, remember that the Special on Obi's Lightsaber specifies that the Shield goes on the attached character (of the Lightsaber).

On top of the really cool synergies going on between CUNNING, and the other upgrades in the deck, with the Special being able to emulate the effect of any other Special in the game, there are crazy possibilities to explore: Including using an AT-ST Special to destroy itself! Keep that in mind before playing your Pirate Speeder Tank.

FORCE ILLUSION and SECOND CHANCE are obvious includes in any deck with such a low health pool, and might just keep you in the game long enough for you to push through wins.

DOUBLE-DEALING is essentially in this deck a guaranteed extra resource a turn (8 Specials on 4 character dice) and should pay for itself the same turn you play it. You should definitely mulligan for this card as it allows you to both play upgrades and mitigation which both are much needed.
4. EVENTS:If you thought the deck was low on upgrades, then you'd be surprised at seeing this deck only run 5 full blooded mitigation cards (in addition to the Force Illusions and Second Chances) and instead opting for a number of tech cards that provides different tricks for the deck as well as the Battlefield providing for a free mitigation every round.

The mitigation is amongst the best in the game though and although its all has spot requirements, it's hard to argue against either EASY PICKINGS, ENTANGLE and OVERCONFIDENCE.

DEFLECT is definitely a meta call, and while it can be a dead card against many decks, it can also be exactly what is needed to swing the odds in your favor, same goes for VANDALIZE, which is great against a number of decks that include Force Speeds, Chance Cubes, Force Illusions, etc., and when needed even removing an Anakin Skywalker's Podracer.

RIPOSTE is out of hand damage, and a nifty little card to include. Not so long ago, when blue heroes were Kings and Queens of the world, you'd have expected Riposte aplenty, but it might actually take some opponents by surprise, and works excellently with Yoda Specials and the Obi's Lightsaber.

FRIENDS IN LOW PLACES is still a monster of a card. Providing hand knowledge and removal of some of the worst mitigation cards, including Easy Pickings, which is an absolute nuissance against this deck.

REBEL is a great include and is a utility card that can be used to either bring back upgrades or events from your discard pile. It gives flexibility and looks like a great include as a one-off.

IMPULSIVE is awesome with the 2 Focus side on Yoda, and can even be used to provide that extra action needed to disrupt resources before putting damage through with a Hondo Special.

HYPERSPACE JUMP as already discussed is your bail-out of jail card, no surprises there, and is always what functionally secures that you can choose your opponent's battlefield, start with the shields and a much needed health boost, and still reliably get some rounds of benefit of your own battlefield.
5. BATTLEFIELD:There are a lot of proactive Battlefields out there, the 2 best choices would probably be Outer Rim Outpost and Frozen Wastes, while the latter is probably the better and safer choice, given the low number of mitigation this deck runs.

6. MULLIGAN OPTIONS:You want to see your resource generation going early with Double-Dealing as it loses value fast and is essentially a dead card from round 3. Force Speeds are probably together with Cunnings some of the best cards in the deck, and you need to threatening dice in the pool as fast as possible, while Easy Pickings and Friends in Low Places should secure that your opponent will be off to a slower start than you!